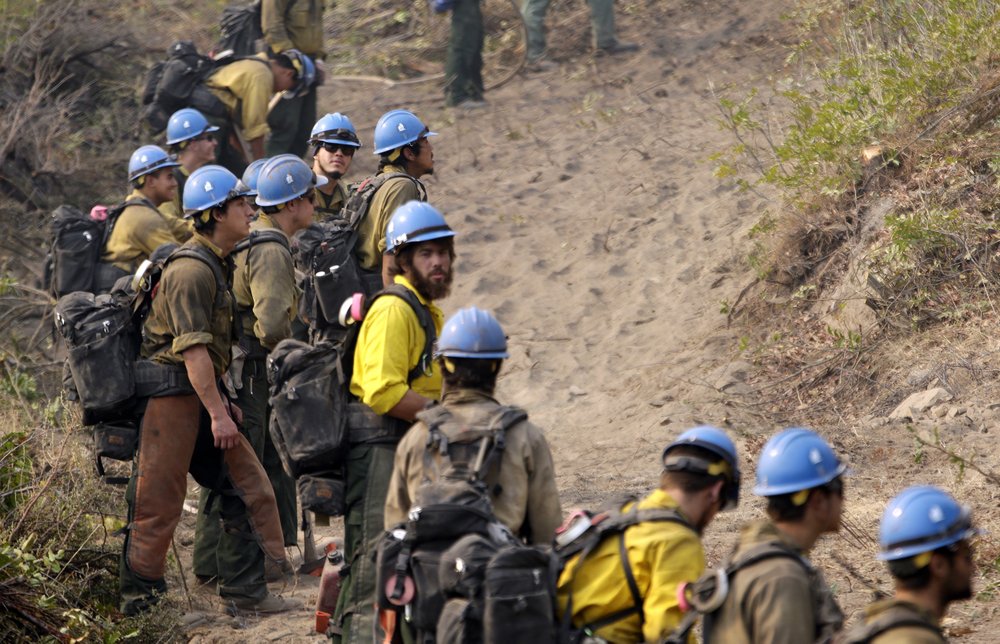 In this Aug. 27, 2015 file photo firefighters from the University of Alaska (Fairbanks) watch as a wildfire slowly creeps toward their fire break near Chelan, Wash. (Photo: AP)

In new plans that offer a national reimagining of how to fight wildfires amid the risk of the coronavirus spreading through crews, it’s not clear how officials will get the testing and equipment needed to keep firefighters safe in what’s expected to be a difficult fire season.

A U.S. group instead put together broad guidelines to consider when sending crews to blazes, with agencies and firefighting groups in different parts of the country able to tailor them to fit their needs. The wildfire season has largely begun, and states in the American West that have suffered catastrophic blazes in recent years could see higher-than-normal levels of wildfire because of drought.

“This plan is intended to provide a higher-level framework of considerations and not specific operational procedures,” the National Multi-Agency Coordination Group, made up of representatives from federal agencies who worked with state and local officials, wrote in each of the regional plans. “It is not written in terms of ‘how to’ but instead provides considerations of ‘what,’ ‘why,’ and ‘where.’”

Federal and state agencies have been scrambling to plan for wildland firefighting since the coronavirus took hold in the U.S. The standard approach to fighting fires means bringing in large numbers of firefighters from different places, housing them together in often unsanitary conditions, then redeploying them to new locations. That’s the opposite of social distancing and other restrictions that health experts say can slow the spread of COVID-19.

A Forest Service risk assessment predicted that large fire camps could have a disproportionately high mortality rate in worst-case scenarios, according to an April 30 letter from a group of lawmakers. They are raising questions about how that risk is being communicated to people on the front lines and regional leaders.

“Given the various state-level stay-at-home orders, will national crews and assets be able to move between regions to respond to wildfires?” U.S. Sen. Ron Wyden of Oregon and 10 other Democratic senators from California, Oregon, Washington, Nevada, New Mexico, Arizona and Colorado wrote to Forest Service Chief Vicki Christiansen. “What are you doing to communicate the scale of risk?”

The Forest Service said Monday that the risk assessment was just a draft, declining to offer more details or a copy.

“The previous version of the report was a draft and is now outdated,” the agency said in an email. “The report is being reviewed and updated with the most current data and is not ready to share.”

The regional plans, released last week, urge fire managers to use an approach called “Module of One” for crews, which recognizes that the work often requires close physical contact between firefighters who travel and camp together. The guidelines suggest that crew members only have close contact with each other and stay at least 6 feet (2 meters) away from everyone who isn’t a member of the module, wearing masks when interacting with others.

Camping should be done mostly in small groups, instead of the traditional approach where sometimes hundreds of firefighters stay in the same area. That means relying on military-issue ready-to-eat or bagged meals instead of catered buffet-style meals at campsites.

“We’re trying to mitigate the potential for spread as much as possible while still providing for safe fire suppression efforts,” National Interagency Fire Center spokeswoman Jessica Gardetto said Monday. “This involves insulating our fire crews as much as possible — so they’re operating more as family units than individuals — and avoiding the establishment of large fire camps and other situations that involve large groups of people gathering in one location.”

The biggest question for many states has been whether they can count on help from the federal government when wildfires threaten communities.

The plan for the U.S. Southwest warned, “in the event of a high disease spread scenario with a high rate of infection, the associated loss of individuals from service will, in even a moderately active fire season, severely tax the ability to maintain an adequate wildfire response.”

States requesting help should be able to show they have enough resources to keep firefighters safe, the guidelines say. That could mean access to testing, a variety of firefighter housing options and plenty of personal protection equipment. But it’s not clear how fire managers will meet those requirements.

Some of the regional plans call for testing fire crews if or when tests become available, and taking temperatures with touchless thermometers if they are available. The plans advise fire managers and medical workers to buy and bring their own thermometers.

Not all firefighting agencies are sold on the value of COVID-19 testing, however. The Department of Interior’s Fire Management Board chairman Leon Ben Jr. warned in a May 1 memo that the tests’ false negative rate could lure fire managers into a false sense of safety.

As a result, the department’s advisers on health issues in wildland firefighting don’t recommend using the tests for routine screening.