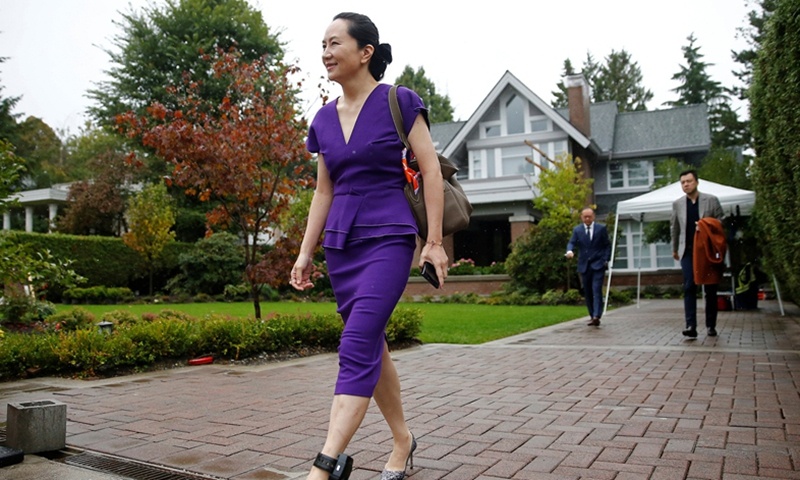 The US side has doubts about winning the Meng Wanzhou case by reportedly offering a plea deal, while whether to take a deal must be Meng's decision alone, a lawyer said on Friday.

"Meng's defense team have made a strong case for extradition to be refused on 'abuse of process' grounds so that she will walk free anyway, and if the US is offering a plea deal it may indicate that they have doubts about winning," Tim Taylor, Queen's Counsel (QC), a Partner at King & Wood Mallesons in Dubai, told the Global Times.

Taylor indicated that Meng may not return to China smoothly even if she accepts the proposed deal. "Your criminal record can restrict your freedom to travel the globe to places that refuse visas if you have been convicted of a crime," he said.

The comment came as the Wall Street Journal reported on Thursday that the US Justice Department is discussing a deal with Huawei CFO Meng Wanzhou that would allow her to return home to China from Canada, but she has to admit to some of the allegations against her.

Lawyers for Meng have talked to Justice Department officials recently about the possibility of reaching a "deferred prosecution agreement," the report said. Meng has so far resisted the deal, believing she did nothing wrong, it noted.

Meng's lawyer team didn't immediately reply to the Global Times' request for comment, but claims of abuse of process are major arguments for them to challenge authorities, so as to end the case and win her freedom.

"Her lawyers' role is to give their client an honest assessment of the risks of accepting or rejecting a plea deal, which the Prosecution will try to make a more attractive prospect than the risk of fighting and losing," Taylor said, noting that any decision must be Meng's alone.

Chinese Foreign Ministry spokesperson Hua Chunying said at a regular press briefing on Friday that the media report of the US offering a plea deal with Meng reminds her of what former Alstom executive Frederic Pierucci encountered in 2013, which was vividly depicted in his book "The American Trap." "Meng's encounter is almost identical," she said.

Meng is innocent and did not commit any of the crimes the US and Canada have accused her of. It's a "serious political event" that exposes the intention of the US to crack down on China's high-tech companies' development, while Canada plays along in a disgraceful role, Hua said.

Hua pointed out that the Chinese side again urges the US to withdraw its arrest warrant for Meng and the request for her extradition from Canada, while urging the Canadian side to immediately release Meng and let her return to China safely.

Due to the unprovoked detention of Meng by Canada, relations between China and Canada have sharply deteriorated, while uncertainties around the case risk plunging bilateral relations into a new freeze.

"Canada should unconditionally release Meng as an opportunity to boost its ties with China, rather than urge her to admit any wrongdoing," Yao Peng, deputy secretary-general of the Canadian Studies Center of the Chinese Academy of Social Sciences, told the Global Times on Friday.

Yao said that the thriving voice of justice from Chinese society and the international community will gradually erode the Trudeau administration's hardline stance over freeing Meng.

Since Meng was arrested two years ago at Vancouver International Airport, there have been fierce opposition voices within Canada's opposition party. During the second anniversary of Meng's arrest, a group of Canadian politicians launched an online event named Free Meng Wanzhou, calling for the release of Meng, citing "deteriorating relations with China, and the rise of Sinophobia in Canada."

If Canada continues to contain China and its tech companies, it will undoubtedly push China-Canada economic and trade relations into an abyss, Yao said, noting that Canada is not irreplaceable for China despite strong complementarities in bilateral trade.