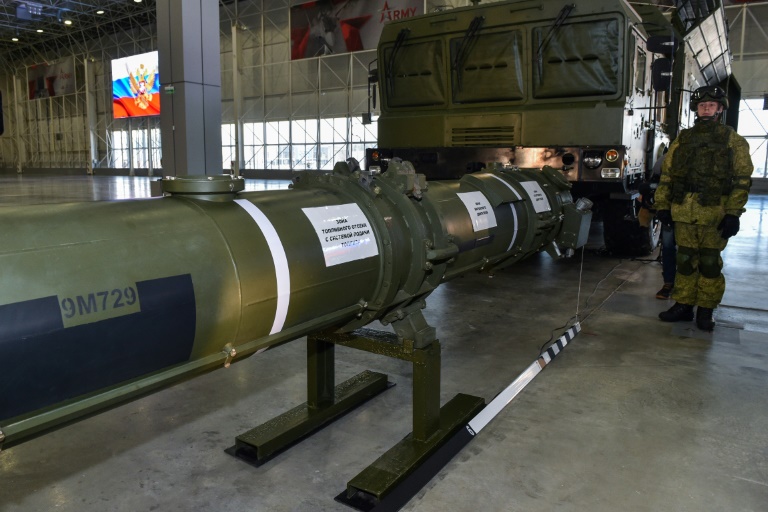 Washington says Russia's 9M729 cruise missile had violated the Intermediate-Range Nuclear Forces Treaty, but Moscow insisted the weapon's range is within the parameters of the agreement. (Photo: AFP)

The United States will officially withdraw from the Intermediate-Range Nuclear Forces (INF) Treaty on Friday, clearing the way for a new arms race with Russia -- and throwing China into the mix.

The treaty -- concluded by then US president Ronald Reagan and Soviet leader Mikhail Gorbachev in 1987 -- limited the Cold War powers' medium-range missiles, both conventional and nuclear.

Earlier this year, US President Donald Trump's administration announced its intention to ditch the agreement, accusing Moscow of repeatedly violating its terms -- a charge Russia denied.

"I think the INF Treaty has served us well, but it only works if both parties comply," new US Defense Secretary Mark Esper said recently.

"The United States will remain in compliance with all of our obligations until August 2nd -- and after that point in time, we will continue to pursue what is in our best interest," he told lawmakers.

Washington formally launched the procedure of leaving the treaty on February 1 -- a six-month process.

Unless something changes in the coming days, the mutual withdrawal will spell the end of the deal, which eliminated a range of missiles with ranges of 500 to 5,500 kilometers (310-3,420 miles).

That paved the way for the mothballing of Russian SS-20 missiles and American Pershing missiles deployed in Europe.

Even if European nations have expressed concerns about the consequence of a new arms race, NATO endorsed the US position, saying Russia's 9M729 missile had violated the INF agreement.

Moscow insists the new projectile has a maximum range of 480 kilometers -- within INF parameters.

In the end, the death of the INF Treaty suits Washington just fine, as former defense secretary Ash Carter said in early July.

"From the military point of view, not the political point of view, it's not so bad," Carter said at a conference at the Council on Foreign Relations.

"We can make good use of what we call conventional prompt strike."