US Police: Shooting at Cuban Embassy is ‘suspected hate crime’ 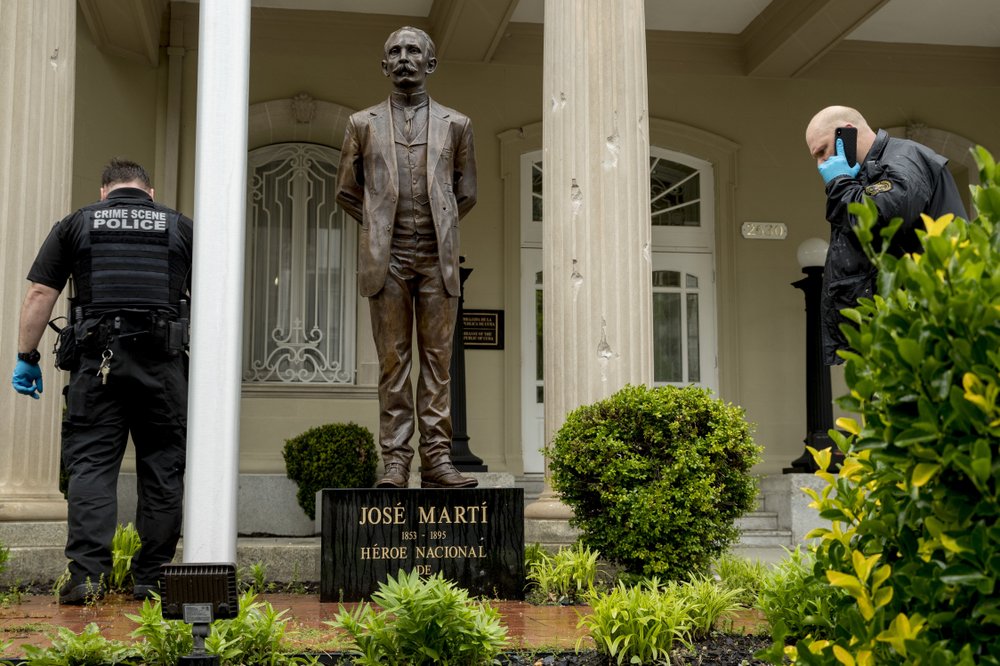 Bullet holes are visible on a column behind a statue of Cuban independence hero José Martí as Secret Service officers investigate after police say a person with an assault rifle opened fire at the Cuban Embassy, Thursday, April 30, 2020, in Washington. (Photo: AP)

A man armed with an assault rifle was arrested after opening fire outside the Cuban Embassy in Washington early Thursday, his bullets tearing holes into the walls and pillars near the front entrance in what authorities suspect was a hate crime.

The gunfire broke out around 2 a.m. outside the embassy in northwest Washington. Metropolitan Police Department officers were called to the scene after neighbors reported hearing gunshots, authorities said. No injuries were reported.

Officers found the man, Alexander Alazo, 42, of Aubrey, Texas, armed with an assault rifle, and they and took him into custody without incident, police said.

A police report obtained by The Associated Press describes the shooting as a “suspected hate crime” and says Alazo “knowingly discharged multiple rounds from an AK-47 rifle into the Cuban Embassy.” But the report also says Alazo’s motivation is unknown.

Officers recovered the rifle, ammunition and a white powdery substance that was found in a small baggie after Alazo’s arrest, according to the report.

Alazo was arrested on charges of possessing an unregistered firearm and ammunition, assault with intent to kill and possessing a high-capacity magazine, a U.S. Secret Service spokeswoman said.

Alazo remained in custody Thursday. It wasn’t immediately clear whether he had a lawyer.

Cuba’s Ministry of Foreign Affairs said in a statement that embassy staff members were “safe and protected” but that the shooting caused “material damage” to the building. Photos showed large holes left in the building’s facade near the front door and in pillars outside the building.

The Cuban government didn’t know the suspect’s potential motives, the statement said, adding that the State Department was aware of the incident.

“It is the obligation of States to adopt appropriate steps to protect the premises of diplomatic missions accredited to their country against any intrusion or damage and to prevent any disturbance of the peace of the mission or impairment of its dignity,” the statement said.

Photos from the scene posted to social media showed a group of police officers outside the embassy after the shooting and investigators searching through an SUV parked there. Other images showed investigators surveying the damage in front of the ornate embassy in Washington’s Adams-Morgan neighborhood, including a bullet hole in a window over the front door and damage to a flagpole and a column flanking a statue of Cuban independence hero José Martí.

Officers from the Metropolitan Police Department and the Secret Service were investigating.