WORLD US politicians must learn the basics of coronavirus

US politicians must learn the basics of coronavirus 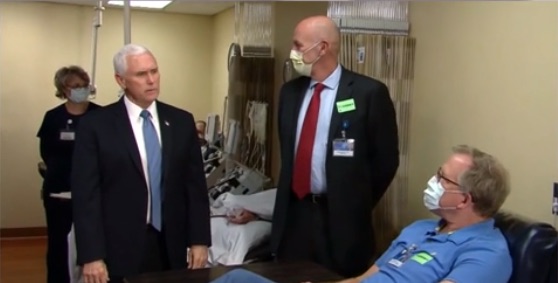 During his visit on April 28, Pence refused to wear a mask as he tromped around the Mayo Clinic. (Screenshot: CNN)

The coronavirus continues to rampage across the US, with the number of confirmed coronavirus cases in the nation topping 1 million Tuesday. However, some US politicians continue to make groundless and irresponsible remarks about the virus that lack basic common sense, showing an urgent need to learn the basics of the coronavirus.

During his visit on April 28, Pence refused to wear a mask as he tromped around the Rochester, Minnesota Institution and met with hospital staff and a patient, flouting federal guidelines and Mayo Clinic’s rule that “all patients and visitors wear a face covering or mask to help slow the spread of COVID-19”.

His reason for doing so was that he and his team have been tested. “Since I don’t have the coronavirus, I thought it’d be a good opportunity for me to be here, to be able to speak to these researchers, these incredible health-care personnel, and look them in the eye and say thank you,” Pence said Tuesday. It is unclear though how wearing a mask would have obstructed Pence’s vision, The Washington Post teased.

However, what Pence doesn’t know is that COVID-19 tests may produce incorrect results, and that it is possible to carry the virus and not know it. Pence’s behavior jeopardizes the health and well-being of those around him and encourages others to engage in the same selfish and irresponsible behavior, said Ken Martin, chairman of the Democratic-Farmer-Labor Party in Minnesota.

This is not the first time Pence has done this. He has refused to wear masks in previous public appearances, including visits to the Air Force Academy and a GE Healthcare site last week, reported by Politico.

Besides Pence, many Republicans have refused to show common sense and acknowledge that wearing a mask is necessary, including President Donald Trump, who said that he will not wear a mask, even as more and more Americans have contracted the virus.

Trump should not only know to wear a mask, but also not to drink disinfectant. Last week, Trump improperly suggested that ingesting disinfectants or taking in sunlight could serve as a coronavirus treatment, which immediately drew a flurry of condemnation and ridicule from medical professionals and the public.

Though he later claimed that he was being sarcastic, his irresponsible suggestion already impacted the lives of those who took his words seriously. It is reported that at least 100 people in the US were hospitalized after taking Trump’s advice, which immediately spurred doctors, lawmakers and the makers of Lysol and Dettol to respond with warnings against ingesting disinfectants, which are highly toxic.

While refusing to take responsibility for his disinfectant comments, Trump urged Americans to use common sense. Well, it seems that Trump is the one outside the realm of common sense.

Trump has previously suggested that a combination of the anti-malaria drug hydroxychloroquine and azithromycin could help in the fight against the virus. However, the drug showed no benefits in a large analysis of its use in U.S. veterans’ hospitals. There were more deaths among those given hydroxychloroquine versus standard care, AP reported.

While putting the lives of Americans at risks, US politicians’ groundless remarks also serve as an attempt to distract from the government’s failure to respond to the coronavirus. As the outbreak escalates in the United States, some US politicians continue to muddy the waters by smearing the WHO and China with senseless accusations, spreading conspiracy theories about the origin of the virus.

Secretary of State Mike Pompeo recently accused China of not being transparent about the epidemic, and renewed calls for the U.S. to be allowed access to Chinese virology labs in Wuhan, spreading the “political virus” of disinformation.

These conspiracy theories not only run counter to the international consensus, but have been debunked by scientists worldwide. A study published last month in Nature Medicine said that it is improbable the virus was made in a laboratory. According to the WHO, all the available evidence indicates that the novel coronavirus originated through natural processes and was not manipulated or produced in a laboratory.

In the fight against this global health crisis that has life-and-death consequences, common sense matters. Just as Chinese Foreign Ministry spokesperson Geng Shuang said, in this global fight against the coronavirus, everyone needs to respect facts, respect science, respect others and, above all, respect oneself. “Where science cannot arrive for the time being, humanity will.”

It is high time that US politicians learn the basics of the coronavirus, for the sake of the American people they serve, as well as the global community they belong to.