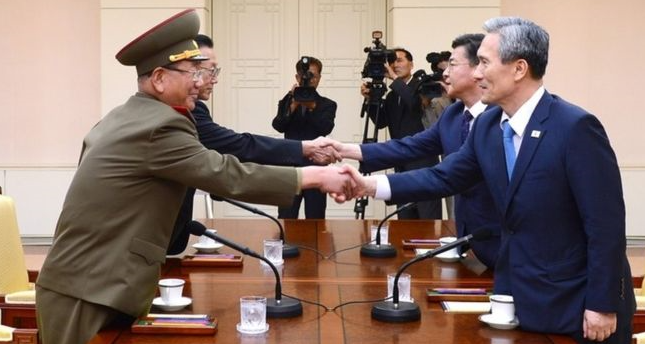 Washington (People's Daily) -- After news reports emerged detailing the breakthroughs made from the high-level talks between North and South Korea, the White House later announced that President Trump had praised accomplishments reached between the two countries.

White House spokesperson Sarah Huckabee Sanders said during a press conference on Tuesday that North Korea gave itself an opportunity to see the value of ending its isolation from the rest of the world.

Sanders reiterated US commitment to getting North Korea to abandon its nuclear weapons program. She later added the US delegation that will go to the Winter Olympics would be revealed soon.

The statement reassured the US would send a high-level presidential delegation to PyeonChang.

Duringa televised interview with US media outlet Fox News, Under Secretary of State for Public Diplomacy and Public Affairs, Steve Goldstein, said anything that lowers tension is a positive development.

Even though the future of North Korea’s nuclear issue remains unknown, a report from the Wall Street Journal disclosed White House rifts on different solutions to the North Korea issue.

The report said that US Secretary of State Rex Tillerson and Defense Secretary James Mattis remain on the diplomatic solution side, while national security adviser H.R. McMaster is advocating a more aggressive alternative. The Debateinside the White House is ongoing and open to a final decision.