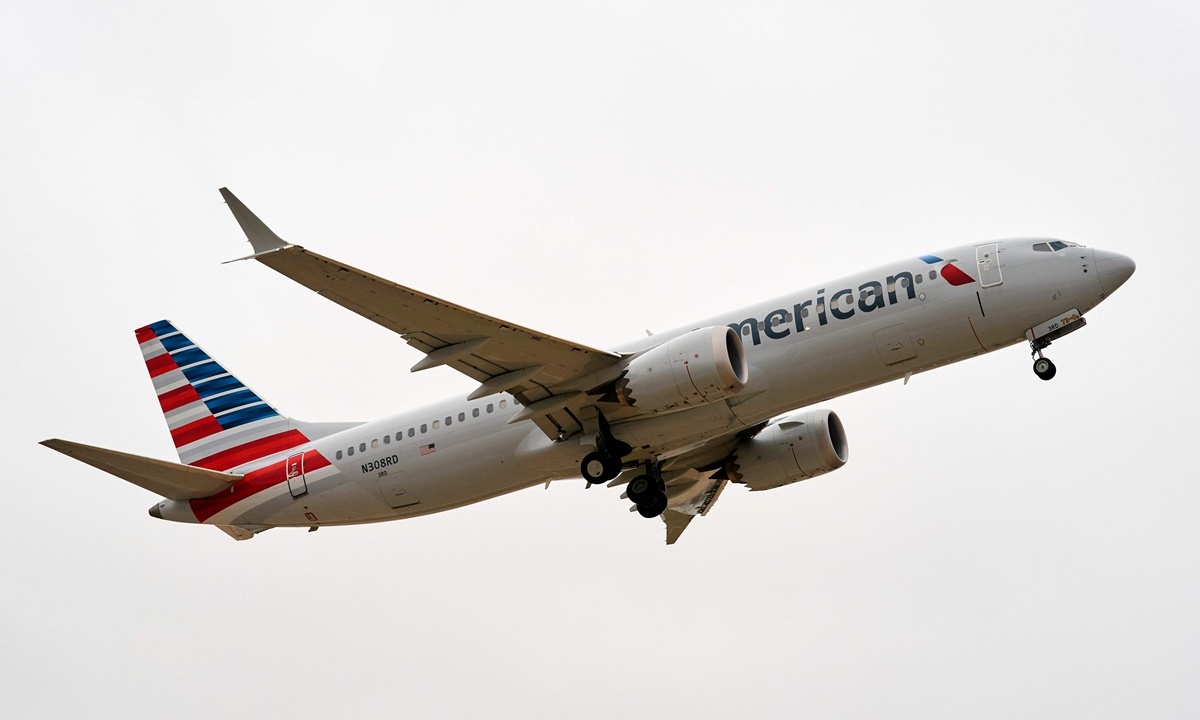 An American Airlines Boeing 737 MAX airplane takes off on a test flight from Dallas-Fort Worth International Airport in Dallas, Texas, the US on December 2. (Photo: VCG)

US airlines and agencies are preparing for increased domestic air travel this summer even as the government continues to debate whether to allow more foreign travelers to visit.

"We've been very, very pleased with the pace of demand recovery," Delta President Glen Hauenstein told an industry conference. "Bookings have been better than expected."

As more Americans pass through airports, the Transportation Security Administration plans to hire another 1,000 officers by July 4, a peak US travel period, after hiring 3,000 officers since January 1.

"We have already seen a sharp rise at the nation's airports and will continue to experience steady increases throughout the summer," Acting TSA Administrator Darby LaJoye told a news conference at Reagan National Airport outside Washington.

The TSA screened 1.86 million passengers on Sunday, the highest daily total since March 2020.

United said it now expects its adjusted earnings before interest, taxes, depreciation and amortization to be positive in the third quarter and trimmed its forecast for a decline in unit revenue in the current quarter.

And American Airlines is seeing "encouraging signs" in business and international travel, which have been hit hard during the pandemic, Chief Financial Officer Derek Kerr said.

The improvements come as more Americans are vaccinated, companies prepare for workers to return to offices and travel, and as more countries open their borders.

However, the US continues to bar the entry of nearly all non-US citizens from most of Europe, South Africa, India, China, Iran and Brazil, despite pressure from travel groups to lift restrictions.

US Homeland Security Secretary Alejandro Mayorkas said at the press conference the government is "following the facts, the data, the science in making the decision as to when business, international travel actually can resume...This is something we are evaluating each and every day." The administration has held extensive meetings on the topic, officials have told Reuters.

Industry officials think Biden could lift restriction on the UK and Ireland as soon as early June. COVID-19 cases in both countries have declined.

Roger Dow, president and CEO of the US Travel Association, said "the UK is the furthest along. Our belief is, if we can open UK, the rest follows."