The United States said Tuesday it was preparing more sanctions against Moscow over the attempted assassination in Britain of a former spy, after a previous round sowed chaos on Russian markets. 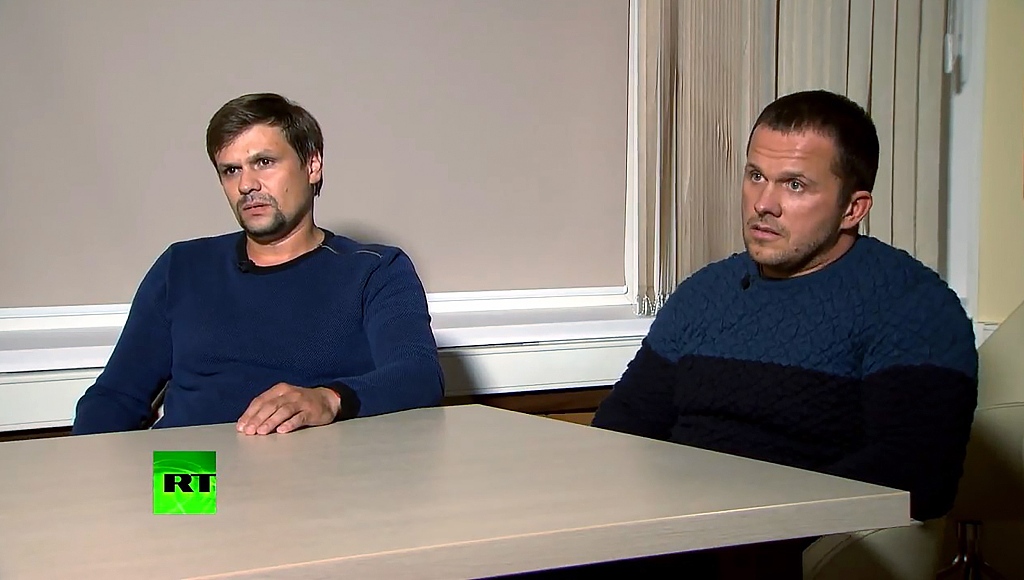 Ruslan Boshirov (L) and Alexander Petrov, suspected by the British authorities of poisoning former GRU officer Sergei Skripal and his daughter Yulia in Salisbury, United Kingdom in March 2018, give an interview to the RT news channel. (Photo: VCG)

Three months after the United States declared that Russia violated a US law that seeks the elimination of chemical and biological weapons, the State Department told Congress in a legally-mandated follow-up that Moscow had not come into compliance.

"We intend to proceed in accordance with the terms of the (Chemical and Biological Weapons) Act, which directs the implementation of additional sanctions," State Department spokeswoman Heather Nauert said in a statement.

She said the State Department was in discussions with Congress, which has led the push to punish Russia, to determine the exact measures.

British investigators said Russian operatives on March 4 tried to kill Sergei Skripal, a former intelligence officer and double agent, and his daughter Yulia Skripal in the English city of Salisbury.

The attack involved Novichok, a military-grade nerve agent developed by the Soviet Union during the Cold War. The two Russians survived but a third person died after exposure.

Under the US law, the State Department must slap further sanctions three months after its initial determination unless a country proves it has reversed course on chemical and biological weapons, for example by inviting in international inspectors.

Russia has denied involvement in the Salisbury attacks and has promised reciprocal measures to all US sanctions.

Prime Minister Dmitry Medvedev warned in August that any imposition of further sanctions would constitute a "declaration of economic war."

The Kremlin said new sanctions would be illegal and that Russia would respond with similar measures.

And in comments after Democrats seized control of the lower house of the US Congress in Tuesday's midterm elections, Russia said it did not foresee bilateral ties improving any time soon.

"Rosy prospects for the normalisation of Russian-US ties are not visible on the horizon," President Vladimir Putin's spokesman Dmitry Peskov told reporters. He insisted, however, that Russia still wanted dialogue with the US.

Lawmakers across the political spectrum have urged a strong response to Russia, despite President Donald Trump's avowed affinity for Putin.

"No one should be surprised that Vladimir Putin refuses to swear off future use of weapons-grade nerve agents," Royce said in a statement.

"It is unacceptable that the administration lacks a plan -- or even a timeline -- for action on the second round of mandatory sanctions required by US law," he added.

The first round of sanctions banned exports to Russia of arms and other products with national security applications and froze any US government credit guarantees to Russia.

The sanctions announcement in August sent Russian stocks plunging and the ruble fell to its lowest level against the dollar in nearly two years.

The drop came even though the direct effects of the initial sanctions were limited, as Russia -- the major rival to the United States as an arms exporter -- does not buy US weapons.

The State Department also made a number of exemptions in the sanctions, such as continuing military trade to allow space cooperation with Russia including commercial launches.

Russia had already been under sanctions since 2014 over its military meddling in Ukraine.

Trump has cited sanctions as proof that he is tough on Russia but has voiced misgivings about punishing Moscow and accused political enemies of waging a "witch hunt" to prove he colluded with Russia in the 2016 election.

Last month, US prosecutors also indicted seven Russian agents over hacking operations after The Netherlands said that spies had obtained access to the world's chemical weapons watchdog, which is based in The Hague.