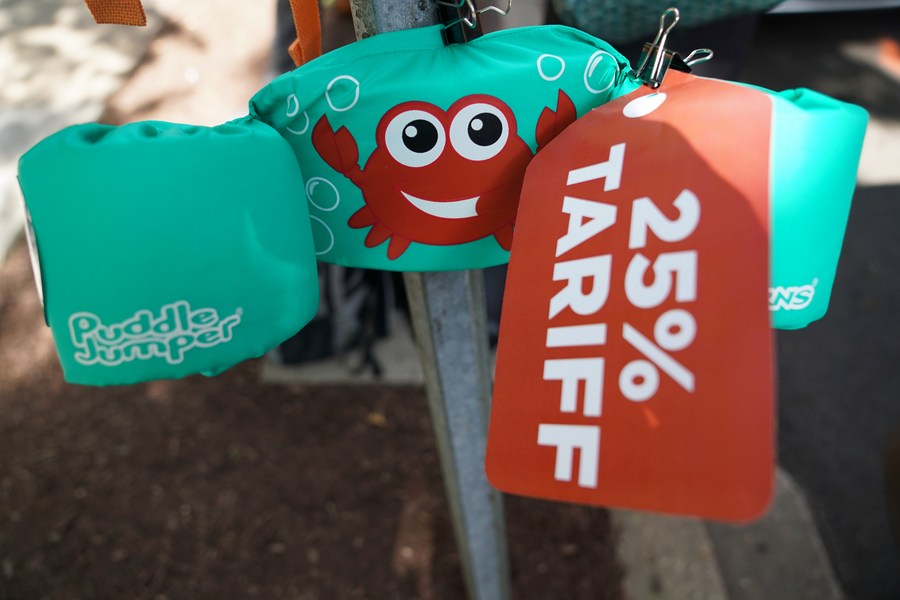 Anti-tariff posters are seen on a life vest outside the building of U.S. International Trade Commission in Washington D.C., the United States, June 17, 2019. (File photo: Xinhua)

WASHINGTON, Sept. 10 (Xinhua) -- The United States has submitted an initial offer to the European Union (EU) that involves a tariff-rate-quota system to resolve a three-year dispute over steel imported from the bloc, Bloomberg reported on Friday, citing a person familiar with the situation.

U.S. and EU officials will discuss the issue at the inaugural meeting of the U.S.-EU Trade and Technology Council on Sept. 29 in Pittsburgh, the report said, adding the U.S. initial offer pertained to steel only and didn't include aluminum shipments.

Tariff-rate quotas allow countries to export specified quantities of a product to other nations at lower duty rates, but subject shipments above a pre-determined threshold to a higher duty, the report said.

The proposal came after U.S. and EU leaders in May "agreed to chart a path that ends the WTO (World Trade Organization) disputes following the U.S. application of tariffs on imports from the EU under section 232."

The European Commission has confirmed with U.S. counterparts that it wants to find a solution before Dec. 1, according to Bloomberg.

Citing national security concerns, the administration of former President Donald Trump unilaterally imposed a 25-percent tariff on steel imports and 10-percent tariff on aluminum imports in 2018, under Section 232 of the Trade Expansion Act of 1962, drawing strong opposition domestically and abroad.

Failing to reach a deal with the Trump administration, the EU took the case to the WTO and imposed retaliatory tariffs on a range of American products.