WORLD US Q2 GDP to suffer steepest drop since 1940

US Q2 GDP to suffer steepest drop since 1940

The US' GDP could see a double-digit contraction in the second quarter, economists predicted, with some anticipating the slide will be more than 30 percent. 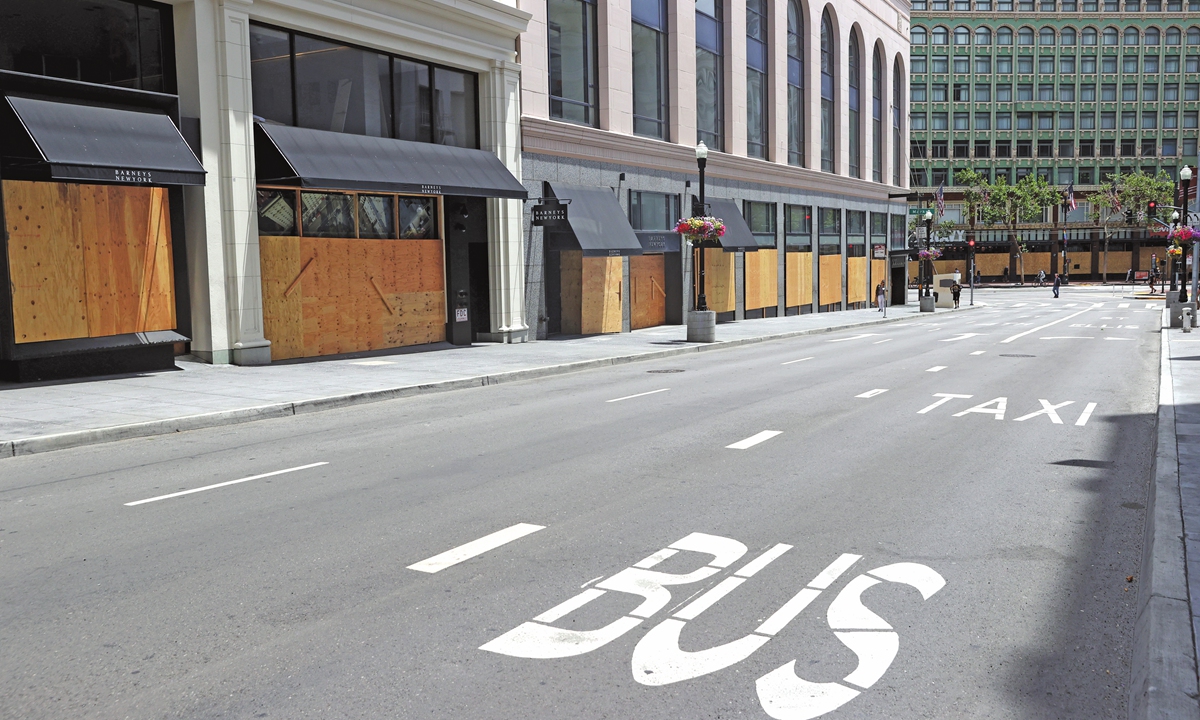 Storefronts sit boarded up on June 11 in San Francisco, California, the US. (Photo: AFP)

The magnitude of the contraction laid bare Washington's mishandling of the COVID-19 pandemic and the cost of igniting rising tensions with major economies, in particular China, which supplies affordable commodities to the US that help fuel the latter's consumption, analysts noted.

The recent spike in coronavirus cases in the US has significantly slowed the country's economic recovery for the whole year, forcing stores and factories to shut again and trapping consumers at home. Some analysts said 2020 may be the US economy's worst year since 1940.

"The market widely expects the US' GDP to shrink by double digits in the April-June period. The slide could be more than 30 percent given the fallout of the pandemic is impacting every aspect of the US economy, from consumption to investment and trade," Tian Yun, vice director of the Beijing Economic Operation Association, told the Global Times on Thursday.

Gao Lingyun, an expert with the Chinese Academy of Social Sciences, agreed that the US economy would see a double-digit contraction in the second quarter. He said it could be the steepest quarterly freefall since 1940.

"Consumption indicators have shown signs of improving in June partly thanks to government stimulus measures, but that cannot make up for the losses in May and April. The US economy is mired in recession," Gao told the Global Times on Thursday.

Consumer spending makes up about 70 percent of US economic activity. In June, US retail sales totaled $524.3 billion, up from $487.7 billion in May and nearly back to pre-pandemic levels, according to data released by the US Commerce Department.

The US has been reopening its economy since mid May. But analysts said that a promising economic recovery in the third quarter, led by consumption, could be dampened by the resurgence of coronavirus cases across southern and western parts of the US.

The outbreak in the US is far from under control. On Wednesday, the country's coronavirus death toll reached 150,034, the highest in the world, according to the Johns Hopkins University's world coronavirus tracker.

US President Donald Trump has shown no leadership given the poor economic performance in the first half of the year and the uncontrolled spread the coronavirus within the US, Li Yong, deputy chairman of the Expert Committee of the China Association of International Trade, told the Global Times on Thursday.

"The extent to which the US economy could climb this year hinges on how long it takes Washington to effectively curb the spread of the virus. But chances of a swift rebound to pre-virus levels next year are very dim, and that will drag down global economic recovery," Gao said.

Under the Trump administration, the US economy has also fallen victim to Washington's reckless push to decouple from China and strained relationships with other countries, analysts said.

Li noted that the second-quarter US economy will not be of much help to Trump in the country's upcoming presidential election, and that is only if it does not entirely destroy his reputation. "As the Trump administration has used macro-economic tools to the point that they no longer have any leverage, Trump and his advisors may focus more on playing the China card to win votes."

The months-long trade war between the world's two largest economies has also added to the woes of US consumers and manufacturers, forcing them to shoulder the costs of hefty tariffs themselves, Gao added.

In the first quarter, the US' GDP dived 4.8 percent.