WORLD US ramps up pressure to coerce intl scientists, rope in allies, WHO members to smear China over virus origins to beat 90-day deadline: source

US ramps up pressure to coerce intl scientists, rope in allies, WHO members to smear China over virus origins to beat 90-day deadline: source 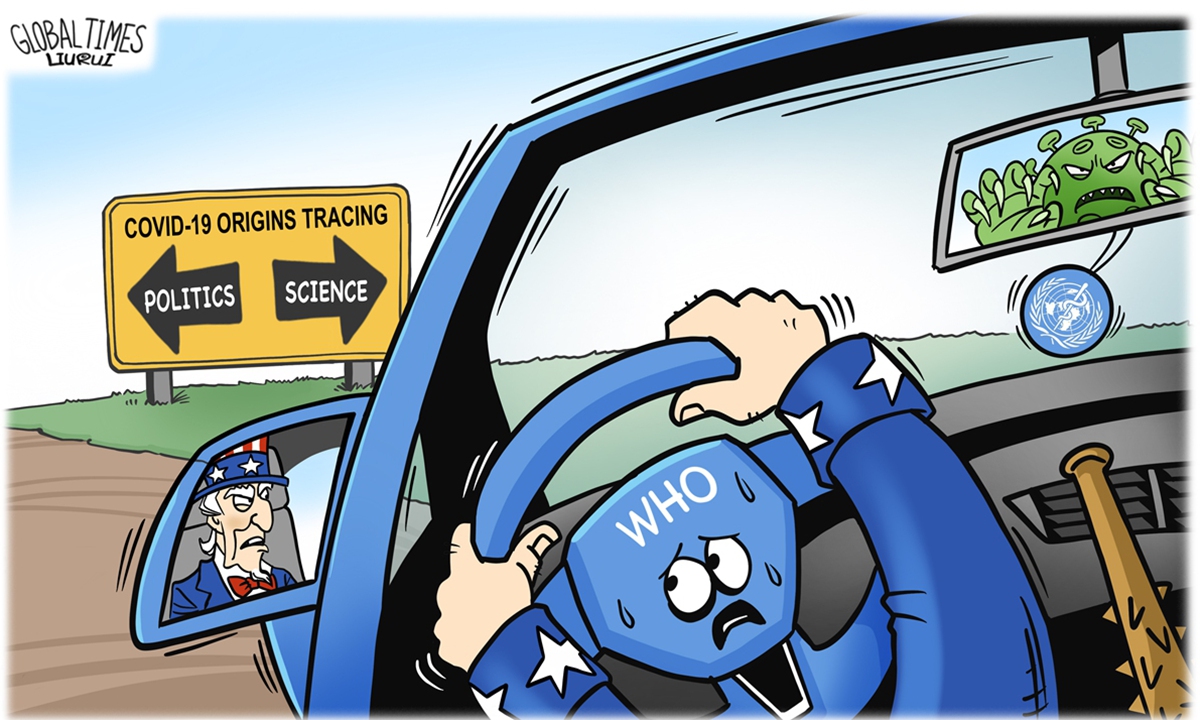 While the US administration is speeding up to process a report on their so-called 90-day investigation to trace origins of the coronavirus that targets China, the Global Times learned from a source that they are enticing or threatening international scientists to cooperate with them on suppressing China by hyping unfounded topics like "China refuses to join in the virus origins tracing work" and "China refuses to cooperate with the World Health Organization (WHO)."

This is despite the fact that most of these scientists are dissatisfied with and oppose the US in politicizing the issue. But the US has exhausted all means to lure and coerce some scientists to serve its agenda, the source close to the matter said.

In May, US President Joe Biden ordered intelligence officials to "redouble" efforts to investigate the origins of COVID-19, including the theory that it came from a laboratory in China. He said the US intelligence community was split on whether it came from a lab accident or emerged from human contact with an infected animal, and he asked the groups to report back to him within 90 days.

The Global Times learned recently that the US intelligence agencies are incapable of producing any concrete "proof" or scientific support for the "lab leak" theory. The so-called evidence that has been fabricated so far is mostly circumstantial evidence that is completely unreliable and US allies also believe that the virus was almost certainly not created artificially.

The US administration knows clearly that the Chinese government insists on scientific principles in the virus origins tracing issue, and opposes the politicization or disregarding the conclusions reached in the joint report on the China-WHO research, a stance that is also supported by many other governments, according to the source.

China's refusal to participate in the US-led second stage of the WHO virus origins tracing work and the joint statement China made with some developing countries that was sent to the WHO, have seriously hurdled the US' plan to promote their "virus origins investigation" that targets China. In desperation, the US administration has to win support from the international community by perpetuating lies like "China refuses to join in the virus origins investigation" and "China refuses to cooperate with the WHO." These lies, although groundless, are helpful to the US administration in smearing China and shifting responsibility of their own failure in fighting against the virus, the source said.

The latest move by the US administration is to arrange the director of the White House's Office of Science and Technology Policy and presidential science adviser to collide with governmental science advisers from the EU, Australia and Japan to issue a statement on the second phase of investigation to urge the Chinese government to reflect on its decision on the rejection, expressing disappointment on China and requiring China to "shoulder responsibility" and "take action," according to the source.

The US administration will also try to win support from science advisers from more WHO member countries especially those in Asia, Africa and Latin America. The latter may release joint announcement with the US or make independent announcements, claiming that WHO's second phase origins tracing investigation is scientific, rather than politically driven. It may also condemn China's absence as "going against the stance of international science community," "preventing global fight against the virus" and "damaging global safety and health."

Many international scientists loathed US' politicization of the issue, they oppose US' stance and refuse to support the US administration. However, the US government is going all out to threaten and entice them, including doxing these scientists and their families, censoring their papers and forcing their employers to put pressure on them, according to the source.

It is not the first time that the US administration has played such dirty plots to threaten international scientists and force them to smear China over the virus origins investigation issue.

The Global Times learned previously that prominent US scientists focused on the tracing of COVID-19 origins have been facing tremendous political pressure, and some have been sidelined for not yielding to politicians-driven conspiracy theories on the matter and many have received anonymous threats.

Meanwhile, despite mounting political pressure, dozens of scientists recently published an open letter on international media journal The Lancet. In the letter they urged that science, not speculation, is essential to determine how the virus that triggered the COVID-19 pandemic reached humans, reiterating that the virus most likely originated in nature and not in a laboratory and they refuted the US-led "lab-leak" theory that put some prominent epidemiologists into a difficult situation.