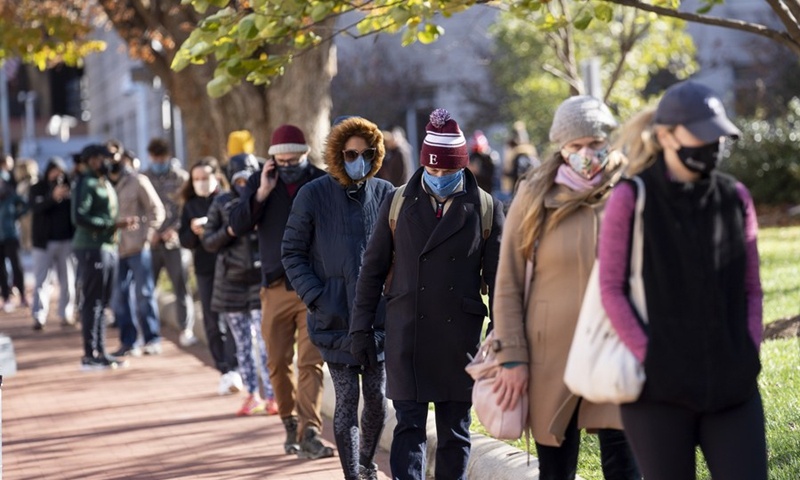 U.S. Federal Reserve Chairman Jerome Powell said Tuesday that economic activity has continued to recover from its depressed second-quarter level, but momentum has slowed down in recent months.

Noting that the reopening of the economy led to a rapid rebound in economic activity in the third quarter, Powell said in a congressional hearing that "in recent months, however, the pace of improvement has moderated."

"Household spending on goods, especially durable goods, has been strong and has moved above its pre-pandemic level," Powell said in his testimony before the Senate Banking, Housing and Urban Affairs Committee.

"In contrast, spending on services remains low largely because of ongoing weakness in sectors that typically require people to gather closely, including travel and hospitality," said the Fed chair.

Powell said the overall rebound in household spending is due, in part, to federal stimulus payments and expanded unemployment benefits, which provided "essential support" to many families and individuals.

In the labor market, more than half of the 22 million jobs that were lost in March and April have been regained, he said, noting that the pace of improvement in the labor market has also moderated, as with overall economic activity.

The central bank chief voiced concern about the surging COVID-19 cases in the United States and beyond.

"The outlook for the economy is extraordinarily uncertain and will depend, in large part, on the success of efforts to keep the virus in check," Powell said.

U.S. COVID-19 deaths surpassed 270,000 on Tuesday, with its national caseload topping 13.6 million, according to the real-time data published by Johns Hopkins University.

"The rise in new COVID-19 cases, both here and abroad, is concerning and could prove challenging for the next few months," Powell said. "A full economic recovery is unlikely until people are confident that it is safe to reengage in a broad range of activities."

Powell and U.S. Treasury Secretary Steven Mnuchin, who also testified at the hearing, called for more fiscal stimulus to boost the virus-ravaged economy over the next few months.

"The risk of overdoing it is less than the risk of under doing it," Powell said, without offering detailed advice for the Congress.

Mnuchin, in his testimony, urged the Congress to pass a targeted fiscal package to support the economy's recovery.

The Democrats-controlled House of Representatives in early October passed a 2.2-trillion-dollar relief bill, but Senate Republicans has recently been pushing for a 500-billion-dollar package. On Tuesday, a bipartisan group of lawmakers introduced an aid proposal worth about 908 billion dollars.