Tillerson made the remarks when meeting with visiting Chinese State Councilor Yang Jiechi to discuss bilateral ties and issues of mutual concern.

For his part, Yang made clear China's stance on issues like Taiwan, requesting the U.S. side take seriously China's concerns.

Yang noted that the sound development of bilateral relations is in line with the fundamental interests of the two peoples and the common aspirations of the international society.

He said he hopes the U.S. side could meet China halfway to secure a stable and healthy development of bilateral ties in the long run.

Some politicians of the U.S. executive and legislative branches have become increasingly interested in playing the Taiwan card in dealing with the U.S.-China relations.

The U.S. House of Representatives passed two Taiwan-related bills in January. The Taiwan Travel Act aims to encourage high-level visit exchange between the United States and Taiwan, while the bill H.R. 3320 will help Taiwan restore observer status in the Geneva-based World Health Organization.

The Senate Committee on Foreign Relations passed the Taiwan Travel Act on Wednesday, and the bill will now move on to the floor of the Senate.

Chinese Foreign Ministry spokesman Lu Kang said on Jan. 11 that the United States should handle the Taiwan issue carefully, noting "the passage of the two bills seriously violates the principles of the one-China policy and three Sino-U.S. joint communiques."

He urged the U.S. side not to send any wrong messages to "Taiwan independence" secessionist forces.

Yang is visiting Washington at the invitation of Tillerson, who said before their meeting that he and Yang had "made many good discussions." 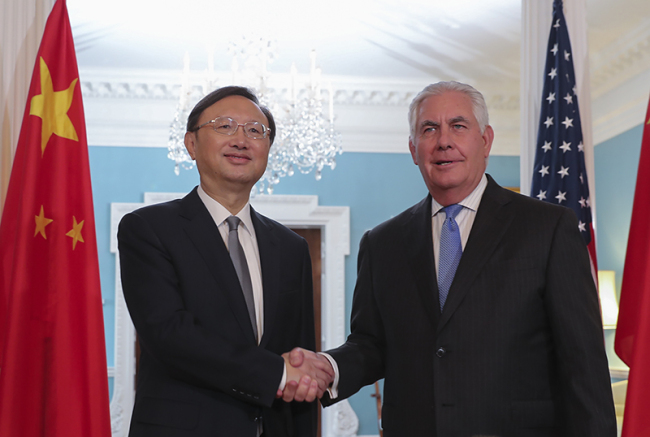