WORLD US reporters fight back with words after colleagues gunned down

US reporters fight back with words after colleagues gunned down 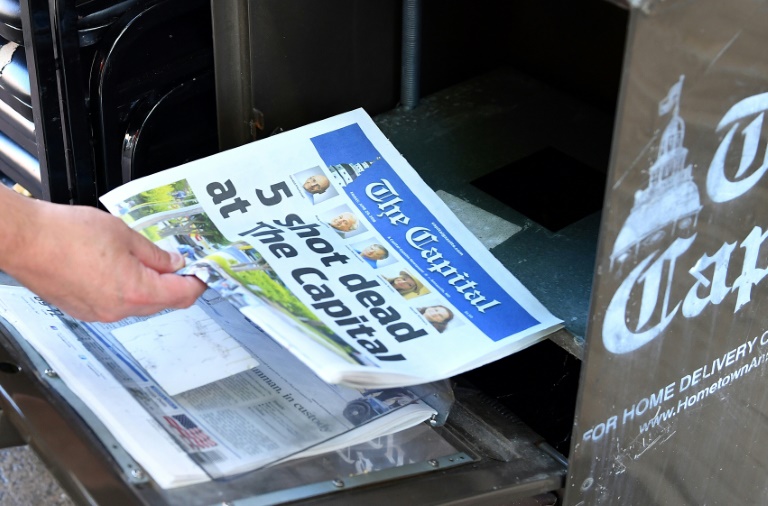 The Capital newspaper came out on Friday despite a shooting which took the lives of five of its staff a day earlier.(Photo: AFP)

Struck by tragedy when a gunman with a grudge stormed their newsroom, journalists at a US community newspaper pulled together to put out Friday's edition in tribute to their five murdered colleagues, targeted in the country's latest mass shooting.

"5 Shot Dead at The Capital," said the headline of the daily in Annapolis, Maryland.

Inside, the editorial page declared, "We are speechless," but was otherwise left blank in honor of those slain.

Thursday's shooting was one of the worst attacks ever to target journalists in the United States, and local media said police had stepped up security at other news organizations.

A 38-year-old named Jarrod Ramos, who had a long-running dispute with the paper, has been charged with five counts of murder, according to court documents posted online by US media. He was appear in court Friday morning.

Although police were still investigating motives in the case, The Baltimore Sun -- which owns The Capital and helped its small team of surviving journalists put out Friday's edition -- said Ramos had feuded with the daily over a 2011 story covering a criminal harassment case against him.

The office of the newspaper, whose online version is the Capital Gazette, is in a commercial zone behind a bank.

Police kept the sector sealed off on Friday as their vehicles went in and out as part of the investigation.

At the entrance to the area, onlookers left flowers and a T-shirt with the inscription: "What part of 'thou shalt not' don't you understand."

Katie and her sister Kelly O'Brian arrived with drinks and snacks for the officers.

"My sister knows a journalist from the Gazette," Kelly said. "The Gazette is very close to the community."

The newspaper, which has roots dating back to the 18th century, profiled its five staffers who died:

Rob Hiaasen, 59, a former Baltimore Sun feature writer who joined The Capital as assistant editor in 2010 and wrote a Sunday column.

"He loves words, he loves humor," The Baltimore Sun quoted his wife Maria Hiaasen as saying. "He loved journalism, he loved helping those young writers at the Gazette."

John McNamara, 56, who pursued his dream as a sports reporter for the paper.

Capital assistant editor and columnist Rob Hiaasen, one of five victims gunned down at the newspaper's office in Annapolis, Maryland

Wendi Winters, 65, a reporter who "had a talent for connecting with the community," according to a former editor.

Rebecca Smith, 34, a recently-hired sales assistant engaged to be married.

"Miss Wendi was a human interest reporter who did great work. Rob Hiaasen was a keen wit. He wrote a lot of warm pieces," Altomare said, emphasizing that "all of them were consummate professionals, and although on occasion we might disagree, they always tried to get both sides of the story out."

President Donald Trump, who has been at loggerheads with much of the media since taking office, initially tweeted his "thoughts and prayers" for the victims, while his spokesman Sarah Sanders said that a "violent attack on innocent journalists doing their job is an attack on every American."

But as he returned to Washington from Wisconsin Thursday night, Trump walked away when reporters asked if he had any words of condolence for families of the dead reporters.

Shock at the shooting came from as far away as Vienna, where the Organization for Security and Cooperation in Europe's media freedom representative said: "An attack against the press is an attack against democracy."

Capital Gazette crime reporter Phil Davis tweeted a chilling account of how the "gunman shot through the glass door to the office and opened fire on multiple employees."

Davis said he was under his desk and heard the gunman reload.

Chase Cook, another of the paper's reporters, said Thursday that the shooting would not stop the daily from going to press.

"We're putting out a paper tomorrow," he vowed as he typed grimly away in the shade of a parking lot, perched on the back of a pick-up truck.

"I don't know what else to do except this," he said. "We're just doing our job."

Altomare said investigators were frustrated as they tried to determine exactly why the gunman attacked.

"Obviously there was an axe to grind with the newspaper," he told Fox, "but we're not getting a lot of cooperation from the suspect. So we have a lot of questions to be answered... It's kind of frustrating all of us because we want to do justice for those folks at The Capital."

The killing of 17 people at a Parkland, Florida high school in February helped reinvigorate the national debate on gun control in a country where firearms are responsible for more than 30,000 gun-related deaths annually.