US retail sales jump in January as recovery gains traction

US shoppers resumed spending in January, the first increase since September and another sign of growing optimism as President Joe Biden works to win approval for his $1.9 trillion economic stimulus plan. 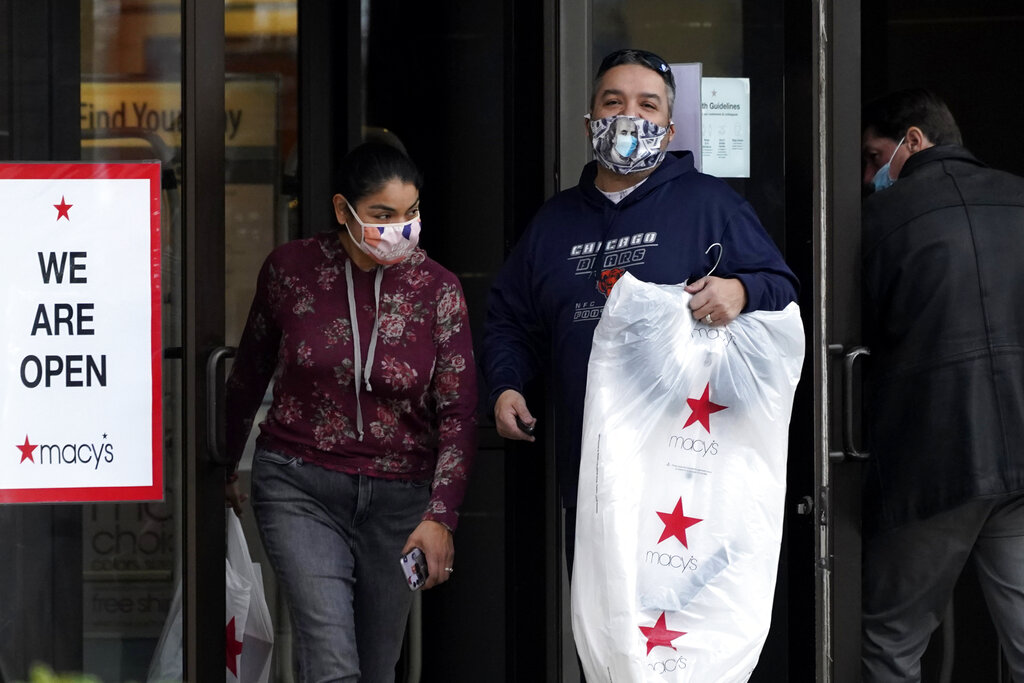 In this Dec. 19, 2020 file photo, Shoppers wear a mask as they leave a department store in Vernon Hills, Ill. (Photo: AP)

But the size of the package has raised some concerns it could reignite inflation, which has been absent from the economy for the past year.

Those fears could be reinforced by a surprise surge in producer prices last month, but officials argue the economy needs the spending jolt amid the Covid-19 pandemic, and US central bankers have brushed off inflation concerns.

The final size of the stimulus could shrink as the plan makes its way through congressional committees, but Democrats, who have a slim majority in both houses, hope to win approval by March 15, when expanded unemployment benefits are set to expire.

Along with consumers opening their wallets, data showed manufacturing continues to rise, business executives are more confident that conditions will improve in coming months, and homebuilders remain optimistic the hot housing market will continue.

US retail sales spiked 5.3 percent, the Commerce Department reported Wednesday, after declining in the final three months of 2020.

The January rebound came after Congress approved a new round of government aid in late December, including extended unemployment benefits.

Rubeela Farooqi of High Frequency Economics said the gain is "likely in response to fiscal aid that is providing critical support to household balance sheets."

Ian Shepherdson of Pantheon Macroeconomics cautioned that sales in February are likely to experience "a correction" partly due to severe weather in much of the country.

But "March should see the start of a sustained recovery, provided the recent downward track in Covid cases continues," he said.

"Bigger increases should then follow in the second quarter as the approach of herd immunity" allows pandemic restrictions to be lifted, he added.

The sales gains were broad-based, driven by increases in numerous categories including furniture, electronics and sporting goods, and a nearly seven-percent jump in bars and restaurants, according to the Commerce Department report.

Even excluding gasoline and vehicles, which economists expected to juice the headline data, sales were up 6.1 percent.

Online merchants, who have benefitted from the pandemic, saw their sales surge 11 percent, according to the report.

The producer price index (PPI), which measures wholesale inflation, surged 1.3 percent last month, the largest since the index was revamped in December 2009, the Labor Department reported.

Economists say the jump might be due to one-time events, and the Federal Reserve likely would welcome signs of price pressures as a return to a normal economy.

Still, "these numbers come when markets are looking for inflation risks, and they will reinforce the idea that the post-Covid surge in economic activity will bring higher inflation with it," Shepherdson said.

In fact central bankers clearly signaled they were comfortable even with short-term price spikes and none raised concerns about rising inflation at the policy meeting January 27-28, according to the minutes released Wednesday.

The members of the Fed's policy setting committee noted that the US economy continues to be threatened by the pandemic and is "far from" achieving growth and employment goals.

They noted that as activity begins to return to normal there could be "one-time increases in certain prices."

However, they "stressed the importance of distinguishing between such one-time changes" that "would be unlikely to have a lasting effect," and a more longer term trend.

In other data reports showing an improving outlook and confidence, the Fed reported industrial production rose 0.9 percent in January while manufacturing increased 1.0 percent.