WORLD US, ROK to act on joint exercises

US, ROK to act on joint exercises 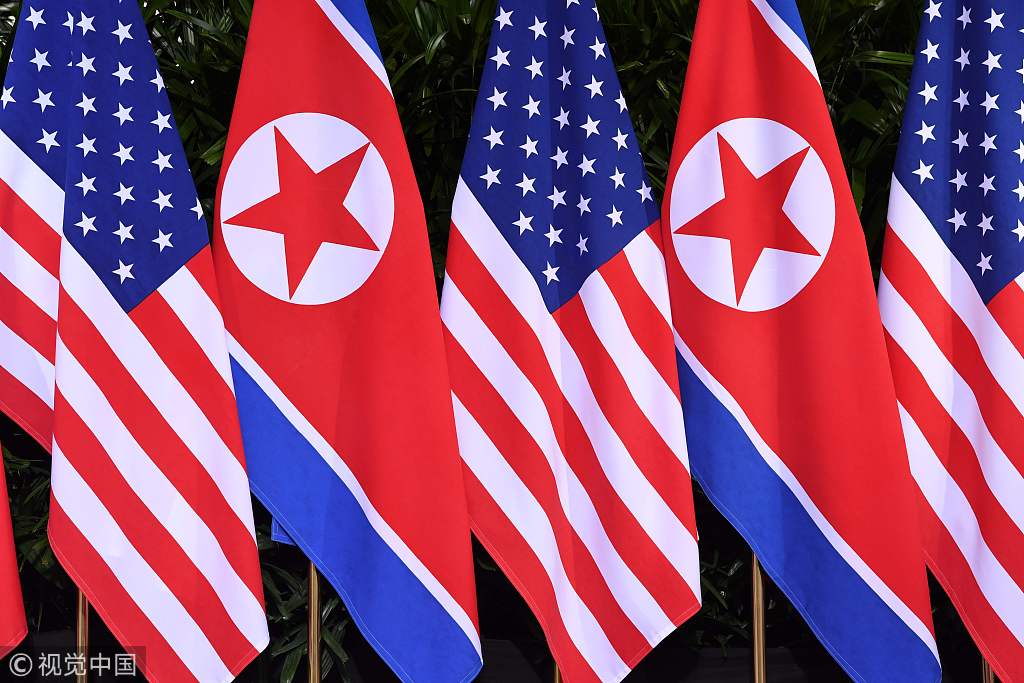 North Korean and US flags stand side by side at the location where North Korea's leader Kim Jong Un will meet with US President Donald Trump for a US-North Korea summit, at the Capella Hotel on Sentosa island in Singapore on June 12, 2018. [Photo/VCG]

WASHINGTON/SEOUL - The United States and the Republic of Korea have agreed to work together to fulfill US President Donald Trump's "guidance" on joint military exercises, the Pentagon said on Thursday.

Trump, after a historic meeting on Tuesday with Kim Jong-un, top leader of the Democratic People's Republic of Korea, told reporters that he will halt the annual US military exercises with the ROK.

The Pentagon said in a statement that US Secretary of Defense James Mattis spoke over the phone with his ROK counterpart Song Young-moo on Thursday, discussing the results of the US-DPRK summit.

Mattis and Song also "discussed their mutual support to ongoing diplomatic efforts, to include how we are working together to fulfill the President's guidance on US-ROK combined military exercises," the statement added.

In an almost one-hour press conference on Tuesday, Trump said the joint military exercises, usually conducted each spring and summer in the ROK, will be stopped "unless and until we see the future negotiation (between the United States and the DPRK) is not going along like it should."

Harry Harris, a retired Navy admiral whom Trump has picked as the next US ambassador to the ROK, endorsed Trump's decision to halt the joint military exercises.

"We should give major exercises a pause to see if Kim Jong-un is serious about his part of the negotiations," Harris told a Senate hearing to consider his nomination on Thursday.

ROK President Moon Jaein said on Thursday that he will carefully review the joint military exercises if talks between the DPRK and the United States continue.

Meanwhile, a senior official in the ROK presidential office said on Friday that US forces in the country are not subject to negotiations between the DPRK and the US, as they are a matter for the alliance between the US and the ROK.

The senior official in the ROK presidential office also said there had been discussions between the DPRK and the US on the goal of completing an "early" denuclearization of the Korean Peninsula, before the Tuesday summit. The official did not elaborate.

A majority of people in ROK were positive about the Kim-Trump summit, a survey showed on Friday.

According to the Gallup Korea poll, 66 percent of respondents said the DPRK-US summit was well done. Only 11 percent negatively saw the summit.

The result was based on a survey of 1,007 voters conducted on Thursday.