Despite its world-class medical system and its vaunted Centers for Disease Control and Prevention, the US fell behind in the race to detect dangerous coronavirus mutations. And it's only now beginning to catch up. 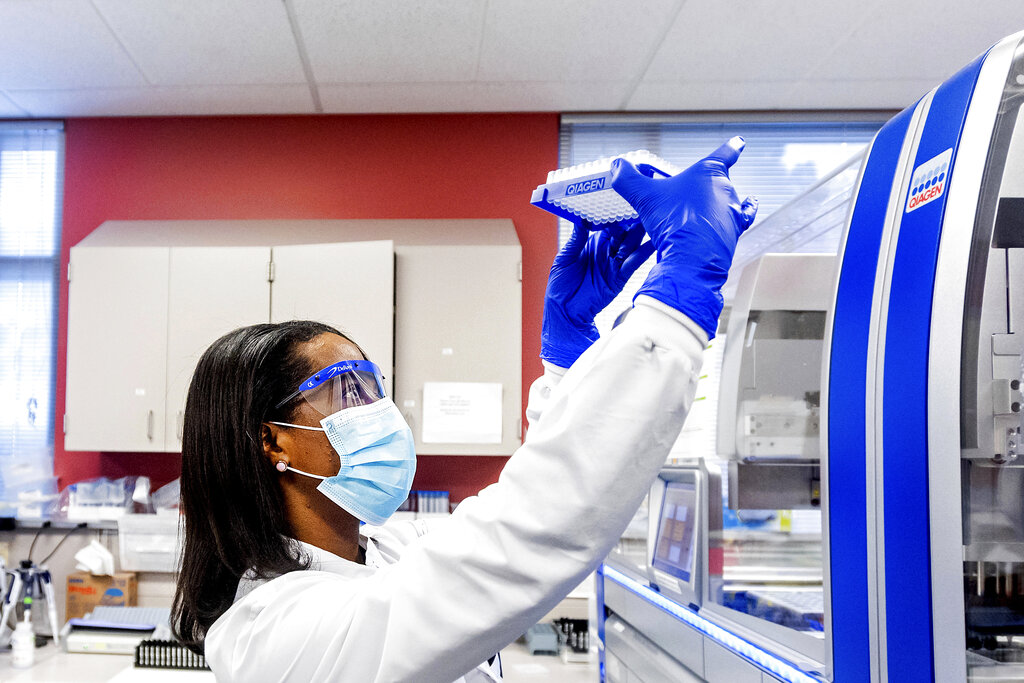 The problem has not been a shortage of technology or expertise. Rather, scientists say, it’s an absence of national leadership and coordination, plus a lack of funding and supplies for overburdened laboratories trying to juggle diagnostic testing with the hunt for genetic changes.

“We have the brains. We have the tools. We have the instruments,” said Ilhem Messaoudi, director of a virus research center at University of California, Irvine. "It’s just a matter of supporting that effort."

Viruses mutate constantly. To stay ahead of the threat, scientists analyze samples, watching closely for mutations that might make the coronavirus more infectious or more deadly.

But such testing has been scattershot.

Less than 1% of positive specimens in the US are being sequenced to determine whether they have worrisome mutations. Other countries do better — Britain sequences about 10% — meaning they can more quickly see threats coming at them. That gives them greater opportunity to slow or stop the problem, whether through more targeted contact tracing, possible adjustments to the vaccine, or public warnings.

CDC officials say variants have not driven recent surges in overall US cases. But experts worry that what's happening with variants is not clear and say the nation should have been more aggressive about sequencing earlier in the epidemic that has now killed over 450,000 Americans.

US scientists have detected more than 500 cases of a variant first identified in Britain and expect it to become the cause of most of this country’s new infections in a matter of weeks. Another troubling variant tied to Brazil and a third discovered in South Africa were detected last week in the US and also are expected to spread.

The British variant is more contagious and is believed to be more deadly than the original, while the South Africa one may render the vaccines somewhat less effective. The ultimate fear is that a variant resistant to existing vaccines and treatments could eventually emerge.

Potentially worrisome versions may form inside the US, too. “This virus is mutating, and it doesn't care of it's in Idaho or South Africa," Messaoudi said.

But the true dimensions of the problem in the US are not clear because of the relatively low level of sequencing.

“You only see what’s under the lamppost,” said Kenny Beckman, director of the University of Minnesota Genomics Center, which started analyzing the virus’s genetics last spring.

After the slow start, public health labs in at least 33 states are now doing genetic analysis to identify emerging coronavirus variants. Other states have formed partnerships with university or private labs to do the work. North Dakota, which began sequencing last week, was the most recent to start that work, according to the Association of Public Health Laboratories.

The CDC believes a minimum of 5,000 to 10,000 samples should be analyzed weekly in the US to adequately monitor variants, said Gregory Armstrong, who oversees the agency's advanced molecular detection work. And it's only now that the nation is hitting that level, he acknowledged.

Still, it is a jumble of approaches: Some public health labs sequence every positive virus specimen. Some focus on samples from certain outbreaks or certain patients. Others randomly select samples to analyze.

On top of that, labs continue to have trouble getting needed supplies — like pipette tips and chemicals — used in both gene sequencing and diagnostic testing.

President Joe Biden, who inherited the setup from the Trump administration, is proposing a $1.9 trillion COVID-19 relief package that calls for boosting federal spending on sequencing of the virus, though the amount has not been detailed and other specifics have yet to be worked out.

For more than five years, US public health labs have been building up their ability to do genomic sequencing, thanks largely to a federal push to zero in on the sources of food poisoning outbreaks.

At the pandemic's outset, some labs began sequencing the coronavirus right away. The Minnesota Department of Health, for example, started doing so within weeks of its first COVID-19 cases in March, said Sara Vetter, an assistant lab director. “That put us a step ahead,” she said.

The CDC likewise worked with certain states to sequence close to 500 samples in April, and over a thousand samples in May and June.

But many labs didn't do the same — especially those overburdened with ramping up coronavirus diagnostic testing. The CDC's Armstrong said that at the time, he couldn't justify telling labs to do more sequencing when they already had their hands full and there wasn't any evidence such analysis was needed.

“Up until a month ago, it wasn’t on the list of things that are urgently necessary. It was nice to have," said Trevor Bedford, a scientist at the Fred Hutchinson Cancer Research Center in Seattle. "There was definitely lack of federal resources assigned to doing exactly this.”

At the same time, because of stay-at-home orders imposed during the outbreak, researchers at some labs were told not to go in to work, Messaoudi said.

“Instead of having a call to arms,” she said, “they sent everyone home.”

Over the summer, though, a group of scientists sounded the alarm about the state of genomic surveillance in the US and began pushing for something more systematic.

In November, the CDC began to roll out a national program to more methodically pull and check specimens to better determine what strains are circulating. Then in December, the US got a wake-up call when British researchers announced they had identified a variant that seems to spread more easily.

The CDC reacted by announcing its surveillance program would scale up to process 750 samples nationally per week. The agency also contracted with three companies — LabCorp, Quest Diagnostics and Illumina — to sequence thousands more each week. State labs are doing thousands of their own.

“Where it has free rein of the place, there’s going to be significant variants that evolve,” Scripps Research Institute scientist Dr. Eric Topol said. "The more genomic sequencing, the more we can stay ahead of the virus.”