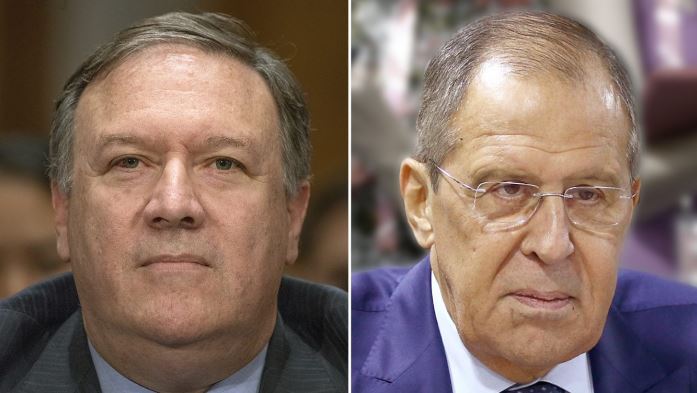 The US State Department said on Friday that Secretary of State Mike Pompeo had spoken with his Russian counterpart Sergei Lavrov over phone to discuss the recently announced US sanctions on Russia and the bilateral ties.

Pompeo "reiterated that the US seeks an improved relationship with Russia and agreed to future dialogue," read the statement.

She added that sanctions, which are based on the Chemical and Biological Weapons Control and Warfare Elimination Act of 1991, will take effect on or around Aug. 22, following a 15-day congressional notification period.

According to senior State Department officials, the sanctions will come in two phases. The first phase will ban the granting of licenses to sell "all national-security sensitive goods or technologies" to Russia.

At the moment, such sales applications are being scrutinized on a case-by-case basis, and Washington "will be presumptively denying such applications" after the sanctions come into force.

They said unless Russia, within three months since the sanctions become effective, provides "reliable assurances" that it will no longer engage in chemical weapons use and allows on-site inspections by the United Nations or other internationally recognized impartial observers, the second batch of "more draconian" sanctions will be imposed.

The officials estimated that the sanctions may affect hundreds of millions of dollars worth of exports, dealing a blow to some 70 percent of the Russian economy and resulting in an approximately 40 percent fall in workforce.

Sergei Skripal, a 66-year-old double agent who worked for the Soviet military's intelligence services before defecting to Britain, and his 33-year-old daughter Yulia were found unconscious on a bench outside a shopping center in the southwestern British city of Salisbury on March 4.

The British government accused Russia of masterminding the poisoning, which it said involved the use of Novichok nerve agent. Russia has denied any involvement.

Kremlin spokesman Dmitry Peskov said Thursday that the US actions were "absolutely unacceptable," and Moscow "once again most emphatically reject any accusations in the context of a possible involvement of the Russian state in what happened in Salisbury."

The US decision is unfriendly and inconsistent with the constructive atmosphere created after the recent Putin-Trump meeting, he added.