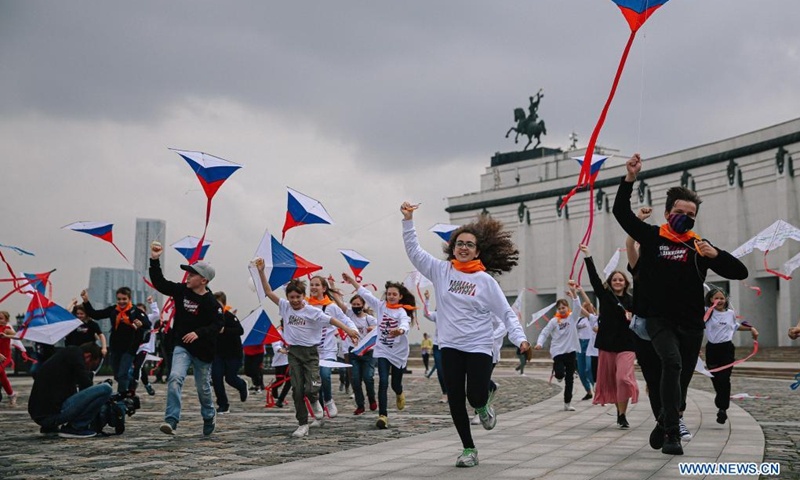 Children run with the kites in colors of Russian flag to celebrate the Russia Day in Moscow, Russia, on June 12, 2021. Russia Day marks the date when the First Congress of People's Deputies of the Russian Federation adopted the Declaration of Russia's National Sovereignty in 1990. (Photo:Xinhua)

US financial sanctions on Russia, which as of Monday prohibited US financial institutions from buying new bonds directly from Russia's central bank, may further accelerate a global de-dollarization push, as more countries seek to avert risks from an increasingly weaponized dollar, Chinese analysts said.

As financial sanctions have gradually become a tool for the US to crack down on other countries, and the US has continuously transferred its inflation risks to other countries amid the COVID-19 pandemic, more countries may seek to reduce their reliance on dollar assets, analysts added.

The latest sanctions were announced by US President Joe Biden on April 15 as a retaliatory measure against Russia over so-called election interference and other accusations, according to a report from the Wall Street Journal.

The order bans US financial institutions from buying new bonds directly from Russia's central bank, finance ministry or massive sovereign-wealth fund after June 14, and is intended to constrain one of Russia's main means of funding its government, said the report.

Any financial sanctions on Russia will only be limited, because Russia's financial sector has a low degree of internationalization, its holdings of US Treasury bonds are small, and its main area of financing is in Europe, Dong Dengxin, director of the Finance and Securities Institute at the Wuhan University of Science and Technology, told the Global Times on Tuesday.

The sanctions are more of a symbolic move that won't have much real impact on Russia's economy, but they are also a retrogressive move that's in stark contrast to free market principles Washington has advocated, Dong said.

Russian Finance Minister Anton Siluanov previously said that the new US sanctions will mean missed opportunities for US lenders, adding that he expected demand for Russia's state debt to remain high.

Foreign holdings of the government bonds of the Russian Federation total about ($37.56 million), accounting for about 14 percent of the total amount outstanding, but these bonds are usually traded in the secondary market and they are not subject to the US sanctions, according to media reports.

"China may step up purchases of Russia's state bonds, as the yields remain high," an industry expert who preferred not be identified told the Global Times on Tuesday.

Russia, an energy-rich country, may also have more measures to cope with US economic sanctions, said the expert.

Russia is cutting the dollar from its $186 billion National Wealth Fund (NWF), Siluanov announced at the St. Petersburg International Economic Forum on June 3, adding that the NWF will instead invest in the euro, the Chinese yuan and gold assets, according to a Reuters report. The changes to the NWF are expected to take place within the next month.

Russia may also soon be tempted to move away from dollar-denominated crude contracts if the US continues to impose targeted economic sanctions, said a report by CNBC, citing Russian Deputy Prime Minister Alexander Novak.

"As an important crude oil exporter, Russia has the right to change trade rules in the sector," Dong said.

De-dollarization is already gaining momentum globally, as many countries face the risk of a weaponized, dollar-centered global payment system and a growing urgency to find alternatives.

Amid volatile ties and as a way to diversify the risk of US dollar assets, China may also reduce the proportion of such assets by purchasing Russian state bonds and promoting China-Russia bilateral currency swaps, Dong noted.

The dollar's share in bilateral trade between China and Russia fell sharply from 90 percent in 2015 to 46 percent in the first quarter of 2020, falling below the 50-percent mark for the first time, according to the Financial Times.