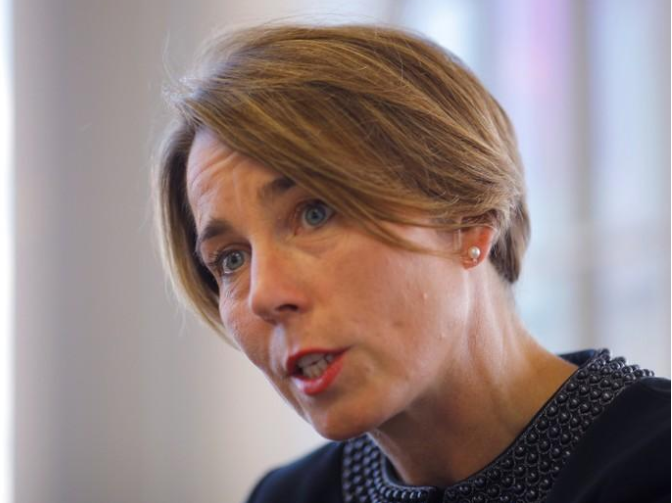 Massachusetts Attorney General Maura Healey answers a question during an interview with Reuters at her office in Boston, Massachusetts, US, July 26, 2017. Photo: Reuters/Brian Snyder

Loan servicer Pennsylvania Higher Education Assistance Agency seized on the department’s filing to argue during a court hearing on Wednesday in Boston that Massachusetts Attorney General Maura Healey’s lawsuit should be dismissed.

The student loan servicing industry has lobbied the US Department of Education under Republican President Donald Trump to take steps to block state actions against servicers.

The Justice Department, representing the Education Department, argued in a filing on Monday that federal law including the Higher Education Act, pre-empted Healey’s state-law claims. Healey, a Democrat, criticized the filing.

“We sued to hold the company accountable for cheating students and families under Massachusetts law and the Department of Education has no business in this case,” Healey said in a statement.

In August, Healey sued PHEAA, which does business as FedLoan Servicing and manages over a fourth of the nation’s $1.4 trillion student loan debt on behalf of various lenders.

The lawsuit accused PHEAA of deceptive practices that caused public servants to lose benefits and financial assistance under two federal programs, including one that forgives student loans after about 10 years of public-service work.

That program is the Public Service Loan Forgiveness. The other is the Teacher Education Assistance for College and Higher Education Grant program, which provides grants to borrowers pursuing teaching careers in low-income schools for at least four years.

In court on Wednesday, John Grugan, PHEAA’s lawyer, called the Justice Department’s filing a “momentous” development, adding it had not submitted a similar filing in a Massachusetts state court case since 1963.

He called it proof that the lawsuit should be dismissed because the Education Department, as the owner of the student loans, should have been named as a defendant.

“So the pre-emption issue isn’t going to make the entire case go away even if you and the department are right, is it?” he asked Grugan.