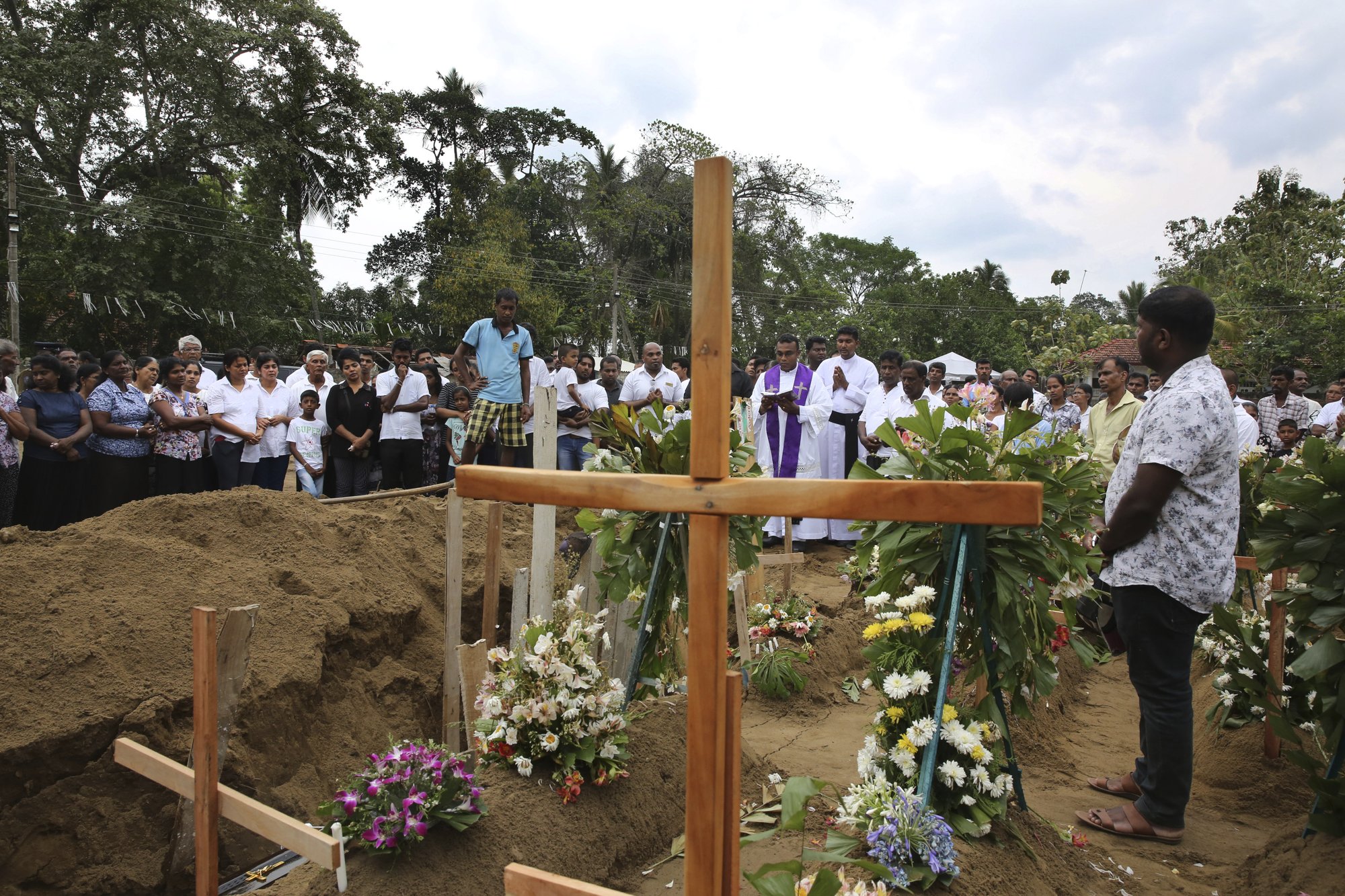 A priest conducts funeral service for a victim of Easter Sunday's bomb blast at St. Sebastian Church, in Negombo, Sri Lanka Thursday, April 25, 2019. The US Embassy in Sri Lanka warned Thursday that places of worship could be targeted for militant attacks over the coming weekend, as police searched for more suspects in the Islamic State-claimed Easter suicide bombings that killed over 350 people. (Photo: AP)

The US Embassy in Sri Lanka warned Thursday that places of worship could be targeted for militant attacks over the coming weekend, as police searched for more suspects in the Islamic State-claimed Easter suicide bombings that killed over 350 people.

The stark warning came as Sri Lankan Prime Minister Ranil Wickremesinghe told The Associated Press that he believed militants, likely with access to explosives, remained on the loose in the island nation off the southern tip of India. He said they “may go out for a suicide attack.”

“We have rounded up a lot of suspects but there are still active people on the run,” Wickremesinghe said in an interview. “They may be having explosives with them, so we have to find them.”

Police, meanwhile, issued an appeal for information about three women and two men suspected of involvement in the Easter bombings.

The U.S. Embassy’s warning, issued on Twitter, was strikingly specific compared to ones often issued by American diplomatic posts around the world.

“Sri Lankan authorities are reporting that additional attacks may occur targeting places of worship,” the tweet said. “Avoid these areas over the weekend, starting tomorrow.”

Already, many Sri Lankan faith leaders had canceled or changed services in the country.

Muslim Religious Affair Minister Abdul Haleem appealed to the Islamic community to avoid gathering for Friday congregational prayers. The noon prayers are the most important in the week for Muslims. Haleem instead urged Sri Lankans to pray in their homes.

The Rev. Niroshan Perera, a priest overseeing funerals of people killed in the blast at St. Sebastian’s church in Negombo, said Catholic churches in the city, known as “Little Rome” for its many religious buildings, were all closed and had canceled Mass upon the advice of government security officials.

Perera said an official had warned him that police were still searching for two armed suspects.

“Little bit, we are nervous,” he said.

Across Colombo and in Negombo, where 110 people died, residents and office workers stayed indoors and closed up shops Thursday, leaving both cities unusually quiet.

Sri Lanka’s civil aviation authority also banned drones and unmanned aircraft “in view of the existing security situation in the country,” according to a statement.

Hobby drones have been used by militants in the past to carry explosives. Iraqi forces found them difficult to shoot down while driving out the Islamic State group, whose members loaded drones with grenades or simple explosives to target government forces. Yemen’s Houthi rebels also have used drones, most recently to target a military parade in January, killing troops.

The attacks on Easter Sunday, mainly at churches and hotels, killed at least 359 people and wounded 500 more, the government said Wednesday. Most were Sri Lankan but the Foreign Ministry confirmed on Thursday that 40 foreigners died.

Sri Lankan leaders have acknowledged that some intelligence units were aware of possible terror attacks against churches or other targets weeks before the bombings.

President Maithripala Sirisena had announced on television Tuesday that he planned to shake up the security forces. On Wednesday, he asked for the resignations of both the defense secretary and the national police chief.

On Thursday, his office said that Defense Secretary Hemasiri Fernando had resigned but would continue to serve until his replacement has been appointed.

Sri Lankan authorities have blamed a local extremist group, National Towheed Jamaat, whose leader, alternately named Mohammed Zahran or Zahran Hashmi, became known to Muslim leaders three years ago for his incendiary online speeches. One Sri Lankan official has said the attackers had broken away from National Towheed Jamaat and another group, which he identified only as “JMI.”

The Islamic State group also claimed responsibility for the attacks, bolstering their assertaion with images of Zahran and others pledging their loyalty to IS leader Abu Bakr al-Baghdadi. Authorities remain unsure of the group’s involvement, though they are investigating whether foreign militants advised, funded or guided the local bombers.

Authorities have said those involved were well-educated and well-off financially. Wickremesinghe told the AP that the father of two of the suicide bombers, a wealthy spice trader, had been arrested as part of the investigation. He identified the man as Ibrahim Hajiar.

Hajiar’s home in Dematagoda, a wealthy Colombo neighborhood, was the site of an explosion Sunday that killed three police officers. On Thursday, police continued to search the house as a white BMW parked outside remained covered in black fingerprint dust.

In a house on the other side of a quiet, leafy lane full of mansions, Buhari Mohammed Anwar, 77, a retired primary school teacher, said his neighbor was a nice person who helped the poor.