US scientists, policy advisors oppose restrictions on collaboration with China 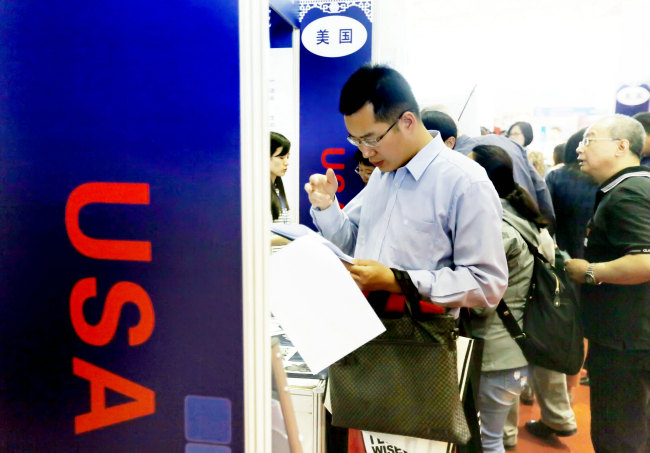 A man consults a stand for an American university during an education exhibition in Beijing on May 7, 2016. (File Photo: IC)

The recent US moves to throw a wrench into its scientific collaboration with China are "counterproductive" and could "backfire," scientists and policy advisors have warned.

It came as the US government is tightening visa restrictions on Chinese students and scholars, and is unduly profiling Chinese scientists in the United States, which caused deep worries among the country's scientific community.

The impulse to "close off external access to US research" is likely to be "counterproductive" and backfire in "mutually-reinforcing ways," said Helen Toner, director of strategy at Georgetown University's Center for Security and Emerging Technology.

Toner said so in her testimony at a hearing on Friday before the US-China Economic and Security Review Commission under the US Congress. She highlighted the risks of blocking US-China collaboration on Artificial Intelligence (AI), one of the emerging technologies which the US Commerce Department is seeking to implement an export control.

Toner said that restrictive measures on collaboration are likely to slow down the pace of research progress within US university and corporate labs, which would damage their standing on the world stage and reduce their market share in AI-enabled products and platforms.

Norman R. Augustine, a member of advisory boards to the US Department of Homeland Security and Department of Energy, said at a seminar on Tuesday in the Center for Strategic and International Studies (CSIS) that America's research and engineering enterprise could not function "if not for the contribution of foreign-born individuals who came here to study."

His sentiments were shared by Eugene Chudnovsky, a professor of the City University of New York. Chudnovsky told Xinhua in an email interview that in the last 30 years, "China has been a huge source of new materials and designs for the United States, as well as of doctoral students in physics, chemistry, and engineering."

Chudnovsky recently drafted an open letter to President Donald Trump, calling upon the US government to immediately stop the campaign of intimidation of ethnic Chinese scientists.

The letter, published on June 3 by the Committee of Concerned Scientists (CCS), listed multiple cases in which ethnic Chinese scientists were intimidated and harassed in a campaign of massive investigation.

"Positions of some prominent Chinese-American scientists have been terminated without due process, their students and laboratories have been left in limbo, with some being closed and the remaining staff being laid off," read the letter issued by CCS, an independent non-profit organization to promote scientific freedom.

"The indiscriminate investigation and harassment of ethnic Chinese scientists should have no place in the United States," said Chudnovsky.

Also, it is "unwise" to drive Chinese researchers away, said Augustine, who called for "very deliberate, precautionary steps" in the US endeavor to maintain its technological advantage.

The United States "should be greatly indebted many of these individuals coming from China," said Augustine, who is also the former chairman and chief executive officer of Lockheed Martin.

"We should continue to bring China's best students and researchers here to the US," since the United States "benefited immeasurably from its open research system," Richard Lester, associate provost for international activities at Massachusetts Institute of Technology (MIT), said at Tuesday's CSIS event.

The latest Nature Index, an indicator for international scientific collaboration, showed that China and the United States are still top collaborators to each other, both generally and in multiple sectors.

Many US policy advisors said the competition with China should proceed with openness instead of working to decouple collaborations.

At Friday's hearing, Jeffery Ding, China lead for the Center for the Governance of AI at University of Oxford, said in his testimony that much of current US policy is focused on scrutinizing how Chinese firms and government-aligned entities turn a startup idea or scientific research into large-scale commercial applications, in what he called a "reactive strategy."

The United States should instead increase investment in research and development rather than imposing too broad and not well-targeted restrictions to foreign students, according to Lester, MIT's associate provost.

Toner also recommended that the US Congress take actions to lift numerical limits on visas, reduce processing time and application burdens, not the other way around, in order to bolster US. competitiveness.

Lester cited MIT President Rafael Reif as saying that "if all we do in response to China's ambition is to try to double-lock all our doors, I believe we will lock ourselves into mediocrity."

"But if we in the United States respect China as a rising competitor with many strengths we can learn from, that view will inspire America to be its incomparable best," wrote Reif in an opinion article.