US scientists are working on a question that baffles weather forecasters. 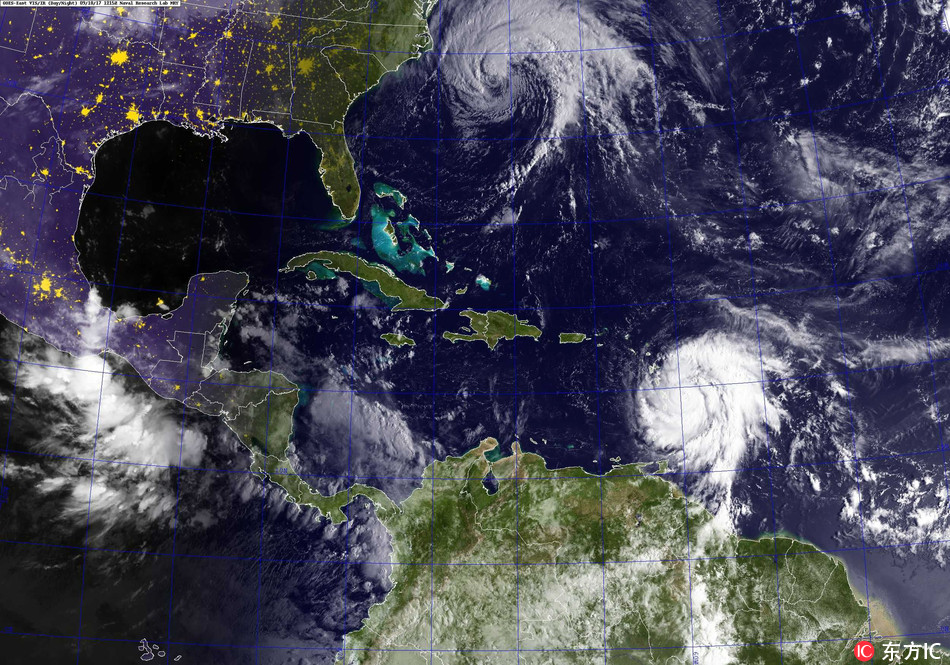 A handout made available by the US Navy shows a GOES satellite image of Hurricanes Jose (top) in the Atlantic Ocean and Maria in the Carribean Sea, 18 September 2017. [Photo: IC]

Researchers at the National Oceanographic and Atmospheric Administration in Miami think they may have figured out how to better predict when a tropical cyclone will rapidly intensify, and when it won't.

The breakthrough could help emergency officials worldwide issue earlier warnings to residents in the paths of storms.

These scientists have good reason to be concerned about hurricanes.

Their office is in Florida - one of America's most vulnerable places for hurricanes - the name given to powerful tropical cyclones in the North Atlantic.

Just last year, Hurricane Irma caused devastation this part of the US, and Hurricane Maria's rampage through the Caribbean left a trail of destruction in Puerto Rico and other islands.

Up until now weather forecasters have struggled to predict how such storms might strengthen.

"In some of these cases they can't tell 24 hours, 48 hours in advance whether or not this rapid intensification is going to occur."

That's Gus Alaka - a scientist with the US National Oceanographic and Atmospheric Administration's meteorological lab.

He says until fairly recently, forecasters relied almost entirely on readings of upper level winds - known as shear - to guide them. The stronger those winds, the more they damage the structure of a tropical system, making it less likely to develop into a full blown storm.

Now, meteorologist, Sundararaman Gopalakrishnan, says data from aircraft missions and satellites are giving a better-than-ever view inside the heart of hurricanes.

"It's like looking at a high resolution TV, basically you are focusing exactly on the spot where you can look at the action. Twenty years back we didn't have neither the resolution nor the technology to even look at the spots of the hurricane because of poorer resolutions in the models. Now we can focus in areas of interest and try to understand and see how we can improve from there."

And what these scientists are finding is changing their understanding of how these storms strengthen.

Alaka says in cases where a tropical system is competing against moderate wind shear, clouds deep inside the circulation can sometimes overcome the force of those winds that are trying to knock the cyclone over.

"We're really talking about deep clouds, deep thunderstorm clouds that are forming within the hurricane's inner core. The more symmetric these deep clouds can be, the better off the storm is going to be for intensification. The more likely that intensification process is."

He says gaining a deeper understanding of that internal battle is key to improving intensification forecasts.

"I'm reminded of this case - Hurricane Joaquin. Early on in Joaquin's lifetime it was a very weak system and the forecasts were not predicting a home run intensification process. There was no indication that this was definitely going to happen. But some of them were predicting a major hurricane. And sure enough, within 2 days the storm had rapidly intensified and we had a category 4, major hurricane sitting at the Bahamas. Those are the situations that cause the greatest concern and really motivate us to get better and better. For this situation where you don't even have a hurricane yet and maybe you have a category 4 bearing down on the United States, that's a huge question for citizens and emergency managers trying to make the right call."

It's hoped more accurate intensity forecasts will make it easier to predict in the future where hurricane damage will be worst - allowing first responders to move resources in earlier.