WORLD US secretary of state agrees on tougher China stance, but cautions against US disengagement

US secretary of state agrees on tougher China stance, but cautions against US disengagement 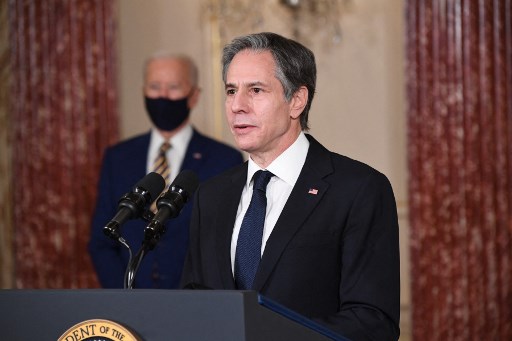 File photo: US Secretary of State Antony Blinken speaks to staff at the US State Department during the first visit of US President Joe Biden(L) in Washington, DC, February 4, 2021. /AFP

U.S. Secretary of State Antony Blinken acknowledged the former administration's tougher stance on China, saying that if the U.S. not working with its allies and partners, China will replace its role.

In a Tuesday interview with NPR on the new administration's foreign policy goals, Blinken said that the former president was right to take a tougher line. "But I think the way that we went about doing it did not produce results."

He said that when dealing with China, the U.S. should be consistently approaching China "from a position of strength, not weakness."

To build up that kind of strength, the top diplomat said that the "first and foremost" thing is to closely coordinate with the country's allies and partners instead of picking fights. "Similarly, being engaged, leaning in, showing up around the world is a source of strength," Blinken said.

"When we pull back from that, when we abdicate our responsibility, when we're not engaged in helping to write the rules and shape the norms that govern relations among nations," Blinken said, "then guess what happens? China fills in and takes our place."

He added that when the U.S. actually stands up for its values, then it is in a position of strength, adding that the diplomatic team has been leading efforts in bringing "human rights and democracy" back to the core of the new administration's foreign policy.