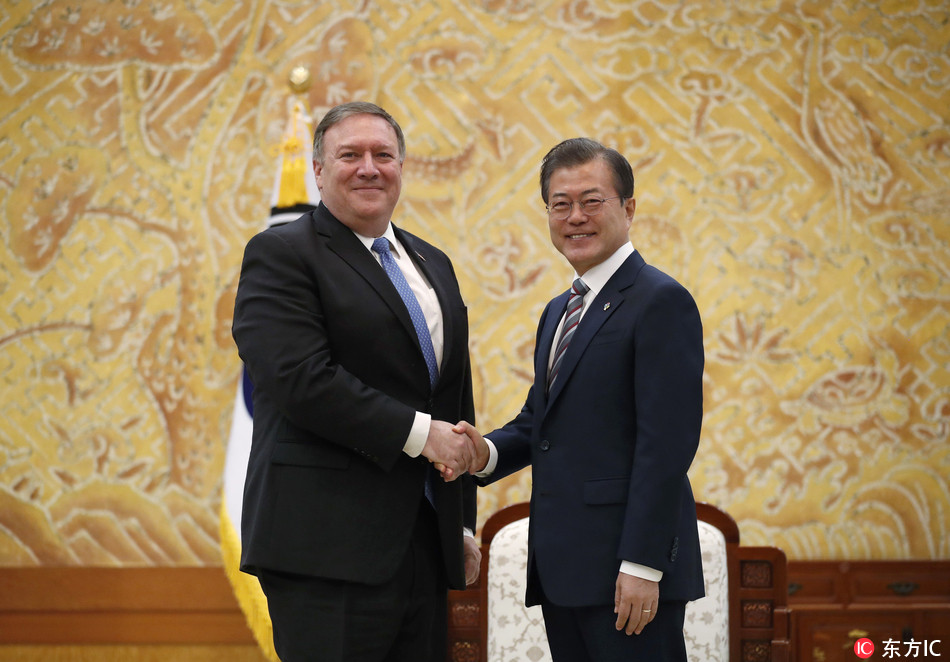 US Secretary of State Mike Pompeo(left) poses with South Korean President Moon Jae-in for a during a bilateral meeting at the presidential Blue House in Seoul, South Korea on June 14, 2018. (Photo: IC)

US Secretary of State Mike Pompeo said Thursday that he is confident to eventually bring peace to the Korean Peninsula though many things are left to do, the Blue House of South Korea said.

Pompeo made the remarks at the presidential complex in Seoul while paying a visit to South Korean President Moon Jae-in.

The top US diplomat said that though many things are left to do, the US and South Korea are anticipated to sufficiently cooperate.

Pompeo said, the two countries have taken a significant first step and would produce a better outcome.

Pompeo arrived here Wednesday evening after joining the historic summit in Singapore on Tuesday between top leader of the Democratic People's Republic of Korea (DPRK) Kim Jong-un and US President Donald Trump.

Kim and Trump signed a joint statement after the summit, agreeing to complete denuclearization of the Korean peninsula in return for security assurances of Pyongyang by Washington.

Hailing the successful DPRK-US summit and the joint statement, Moon told Pompeo that it is more valuable than anything for people of the entire world, including the United States, Japan and China, to become safe from threats of war, nuclear and long-range missile weapons.

Moon appreciated for sharing the outcome of the DPRK-US summit, saying South Korea can discuss ways in more detail to rapidly and completely implement the DPRK-US agreement thanks to Pompeo's visit to Seoul.