WORLD US seeks to calm Israel with tough line on Iran

US seeks to calm Israel with tough line on Iran 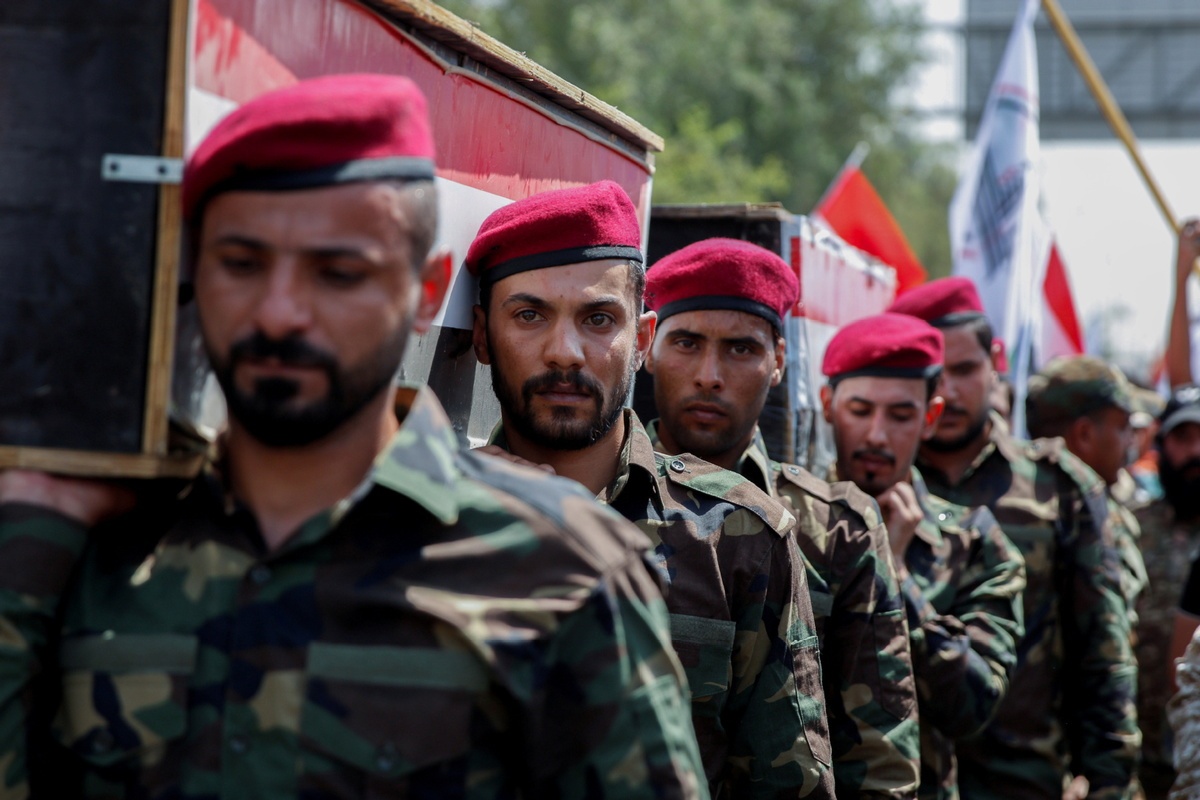 Members of Iraqi Popular Mobilization Forces (PMF) carry the mock coffins of fellow members of PMF, who were killed by US air strikes on the Syria-Iraq border, during a symbolic funeral in Baghdad, Iraq, June 29, 2021. (Photo: Agencies)

WASHINGTON－US President Joe Biden on Monday sought to assure Israel that he would not tolerate a nuclear-armed Iran as he met with outgoing Israeli President Reuven Rivlin amid a major shakeup in Israeli politics and growing angst in Tel Aviv over the US administration's effort to reenter the landmark Iran nuclear deal.

Biden noted that he had ordered airstrikes a day earlier targeting facilities the US military says were used by "Iran-backed militia groups" near the border between Iraq and Syria. After the raids, US troops in eastern Syria on Monday came under a rocket attack, with no reported casualties. Iraq's military also condemned the US airstrikes.

Biden's rhetoric seemed to underscore that he would remain tough on certain Iranian activity even as he seeks a diplomatic track to stem Teheran's nuclear program.

"What I can say to you is that Iran will never get a nuclear weapon on my watch," Biden said at the White House meeting.

The Biden administration has intensified efforts to revive Iran's 2015 accord with world powers to limit Teheran's ability to develop nuclear weapons. In 2018, then-US president Donald Trump, with Netanyahu's backing, withdrew the US from the pact.

Washington and Teheran have had six rounds of indirect negotiations in Vienna since April aimed at restoring the nuclear deal, formally known as the Joint Comprehensive Plan of Action. A senior US State Department official said last week that the two sides still have serious differences over the issue.

Rivlin is set to leave office on July 7 after a seven-year term. Isaac Herzog, a former member of parliament who most recently headed a nonprofit that works closely with the government to promote immigration to Israel, will take over as Israeli president.

Rivlin met later on Monday with Nancy Pelosi, the speaker of the US House of Representatives. They both stressed the friendship between their countries, although Rivlin noted disagreements as well.

Biden and Rivlin talked about Iran and the aftermath of a war with Gaza militants last month. Biden also underscored his support for continued normalization of relations between Israel and countries in the Arab and Muslim world and planned to reiterate the administration's promise to resupply Israel's Iron Dome missile defense system, which was depleted during the 11-day war with Hamas in Gaza.

The latest conflict claimed at least 254 Palestinian lives and killed 13 people in Israel.

Biden has low hopes, at least for the moment, of reviving Israeli-Palestinian peace talks, according to an official familiar with Biden administration deliberations. The official, who spoke on the condition of anonymity, said US officials are starting at square one in building contacts with the Palestinian Authority in the West Bank, a relationship that eroded during the administration of Trump.

The meeting with the Israeli president came one day after US Secretary of State Antony Blinken met in Rome with Israeli Foreign Minister Yair Lapid, a centrist who along with Bennett and six other political allies built a fragile coalition government that put Netanyahu in the opposition.

Administration officials, however, have countered in talks with Kochavi and others in the new Israeli government that it's worth giving diplomacy a shot at stopping Teheran from acquiring a nuclear weapons system, even if it's not guaranteed, the official said.