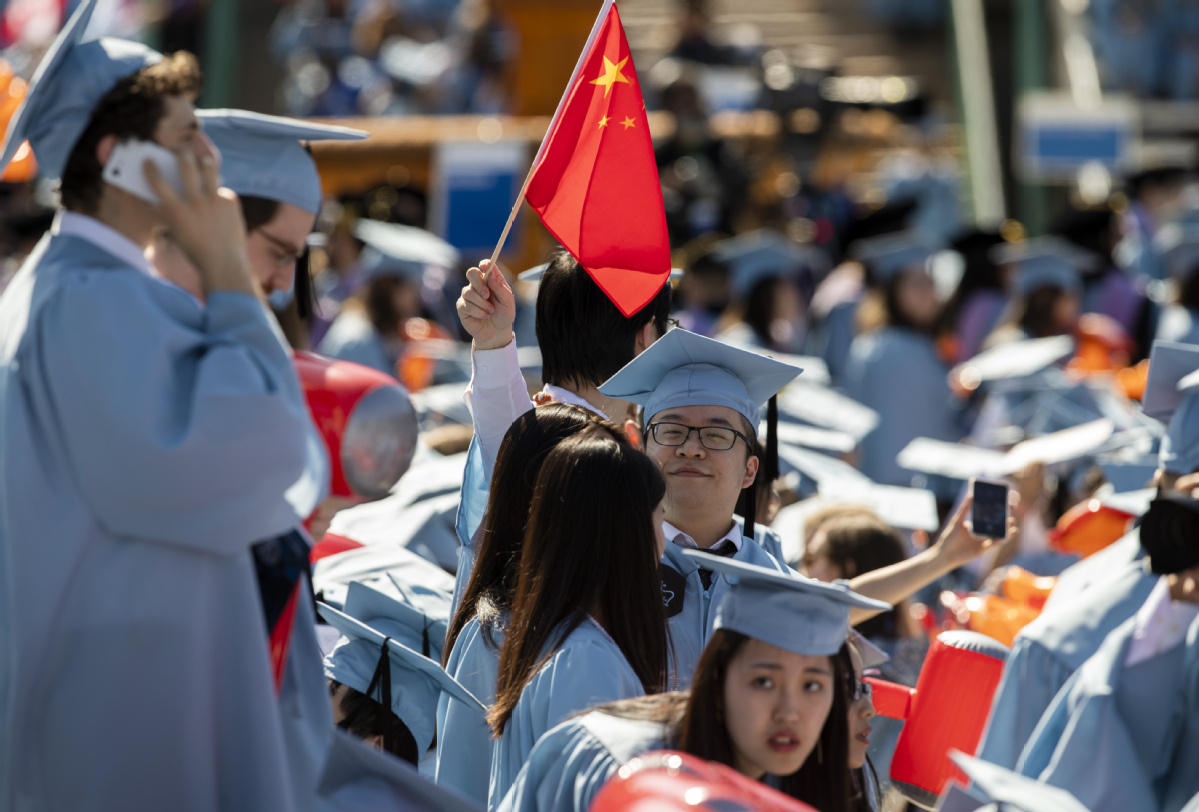 Chinese students attend the graduation ceremony at the Columbia University in New York in May last year. (Photo: Xinhua)

An official from the United States Department of State has said the country will continue to welcome students from China, as recent visa policies have affected that largest source of foreigners studying on US campuses amid a 43 percent international drop overall.

Students from China accounted for 34.6 percent of the slightly more than 1 million international students in the US during the 2019-20 academic year, said the 2020 Open Doors Report on International Educational Exchange.

Before the COVID-19 pandemic, the number of international students in US higher education had declined by 1.8 percent, according to the report.

With the pandemic still raging in the US eight months since it broke out, the shrinkage in international students is likely to continue.

Already, new enrollment of international students decreased by 43 percent in the fall 2020 semester, according to the 2020 Fall International Student Enrollment Snapshot Survey, released along with the Open Doors report.

Ninety-nine percent of US institutions taught classes online or used a hybrid teaching model during the fall 2020 semester, and 90 percent of institutions reported international student deferrals in fall 2020, noted the survey, which was conducted by the Institute of International Education and nine partner higher education associations.

As relations between the world's top two economies soured in recent months, the administration of US President Donald Trump has ramped up restrictions on and scrutiny of some Chinese students and researchers, citing national security concerns.

For example, the US revoked the visas of more than 1,000 Chinese nationals ahead of the fall semester, under a May 29 presidential proclamation to suspend entry from China of some students and researchers deemed security risks, according to the US State Department.

Asked if Chinese students will be treated "equally and fairly" in the US, a State Department official told China Daily, "We continue to welcome Chinese students for legitimate study across all fields."

Anthony Koliha, director of the State Department's Office of Global Educational Programs, said ahead of the release of the Open Doors report, "I can absolutely confirm that US higher education institutions, and the US writ large, continue to welcome Chinese students into our campuses and into our communities."

He said the US approach to identifying "problematic cases" affects only a small fraction of Chinese students studying in the US.

But China's Foreign Ministry has said the US visa restrictions on Chinese students and researchers had severely undermined their legitimate rights and interests and runs counter to the common aspirations for friendly people-to-people exchanges.

A white paper released in June by New Oriental, China's leading education service provider, suggested that 42 percent of Chinese students are interested in studying in the United Kingdom, compared with 37 percent showing an interest in the US. That was the first time that the overseas study intentions of Chinese students had shifted.

Over half of the more than 700 institutions participating in the Fall Snapshot Survey said they would commit to focusing on student recruitment and outreach in China, said Mirka Martel, head of research, evaluation and learning at the Institute of International Education.

"So we certainly continue to see a focus on China for recruiting future international students as well," she said.

The 2020 Open Doors report also indicated US students showing a strong interest in study-abroad programs prior to the pandemic, as during the 2018-19 academic year, 347,099 US students studied abroad for academic credit, a 1.6 percent increase over the previous year.

China is the most popular destination in Asia for US students, attracting 11,639 to its campuses, close to the number of US students going to Germany or Ireland, according to the report.

While 52 percent of international students in the US pursued majors in STEM(science, technology, engineering and mathematics) fields in 2019-20, the top three fields for US students outside the country are business and management, social sciences and physical and life sciences, according to the report.

International students contribute nearly $44 billion to the US economy and support at least 450,000 US jobs, the Open Doors 2020 report said, citing US Department of Commerce figures.