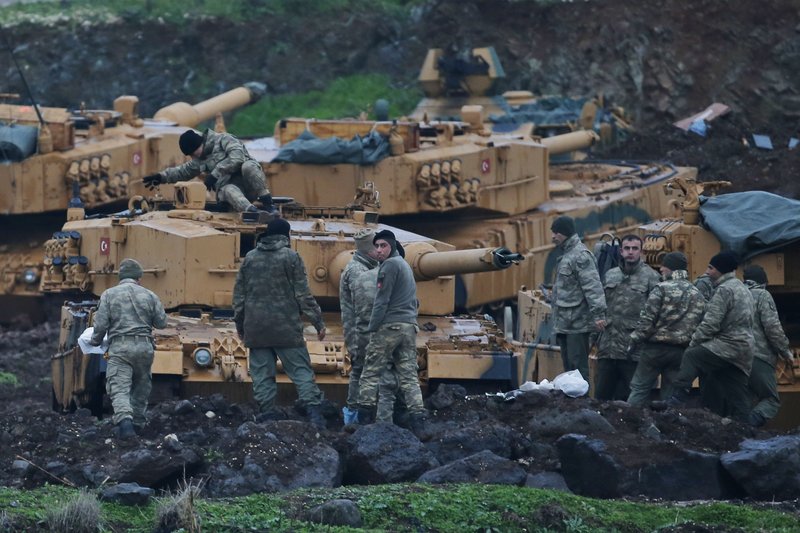 Turkish soldiers prepare their tanks to enter combat and join a military offensive on a Kurdish-held enclave in northern Syria, at a staging area in the Hatay province,Turkey near the the border with Syria. (Photo: AP)

WASHINGTON, Dec. 11 (Xinhua) -- US Senate Foreign Relations Committee on Wednesday approved a bill to impose sanctions on Turkey because of its military operations in Syria and the purchase of Russia air defense system.

Senate Foreign Relations Committee approved the bill "Promoting American National Security and Preventing the Resurgence of ISIS Act" in a vote of 18 to 4, sending the bill to the full Senate.

"This bill makes clear to #Turkey that its behavior with respect to #Syria is unacceptable, and its purchase of the S400 system is untenable," Senator Robert Menendez, who is also the ranking member of the committee, said on his twitter.

US lawmakers from both parties have been making efforts to push the Trump administration to punish Ankara for its S-400 deal with Russia. In a letter earlier this month, Republican Senator Lindsey Graham and Democratic Senator Chris Van Hollen urged Secretary of State Mike Pompeo to implement sanctions on Turkey according to US law.

Turkish Foreign Minister Mevlut Cavusoglu said on Wednesday that Turkey would retaliate if the United States takes steps against it.

"Members of the US Congress need to understand that they cannot achieve anything by imposition," he said in a televised interview with the A News Channel.

Asked if Turkey will respond, the minister said Ankara would assess the steps it will take in the case of the worst scenario, including the halting of the use of the Incirlik Air Base in southern Turkey and Kurecik radar system of NATO.

The S-400 missile system has been a major thorn in the US-Turkey relationship after Turkey signed a 2.5 billion US dollar agreement with Russia to purchase S-400 missile batteries in 2017, and began taking deliveries in July this year.

In response, Washington removed Ankara from its F-35 fighter jet program, in which Turkey is a buyer and manufacturer, for fear that the Turkish move might enable Russia to obtain sensitive information on the aircraft.