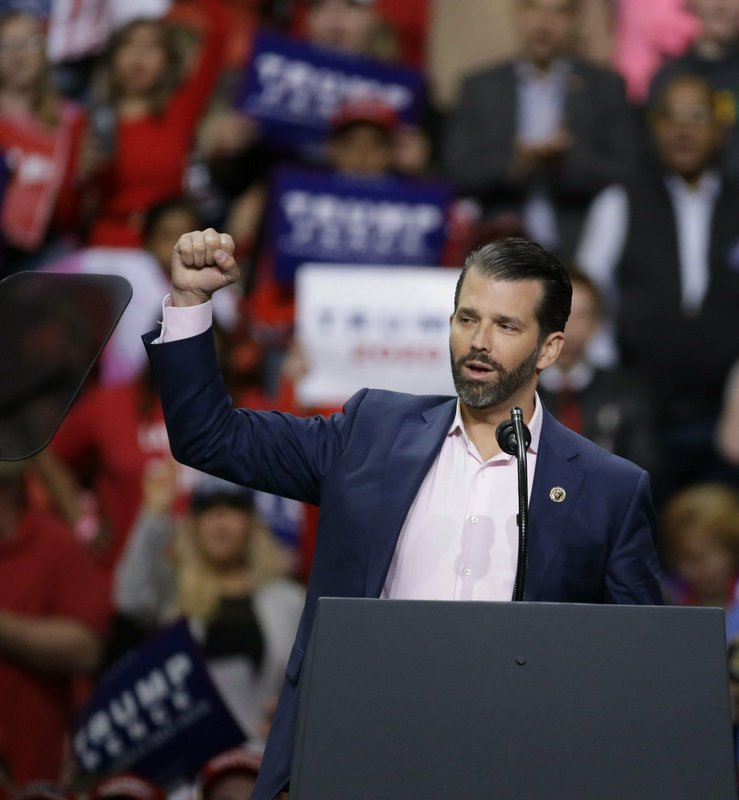 The US Senate intelligence committee has subpoenaed Donald Trump Jr., calling him in to answer questions about his 2017 testimony to the panel as part of its probe into Russian election interference.

That’s according to two people familiar with the subpoena who discussed it on condition of anonymity. It’s the first known subpoena of a member of President Donald Trump’s immediate family, and a new sign that the Senate panel is continuing with its own Russia investigation even after the release of special counsel Robert Mueller’s report on the same subject.

It’s unclear if Trump Jr. will comply with the subpoena. A person close to the president’s eldest son, who requested anonymity to discuss the matter, said Wednesday that there was an agreement when Trump Jr. first testified before the intelligence panel in 2017 that he would only come once, and that he has continued to cooperate by producing documents and answering written questions.

The person called the new request a public relations stunt and criticized the chairman of the panel, North Carolina Republican Sen. Richard Burr, for calling Trump Jr. in.

The committee had renewed interest in talking to Trump Jr. after Trump’s former lawyer, Michael Cohen, testified earlier this year. Cohen told a House committee in February that he had briefed Trump Jr. approximately 10 times about a plan to build a Trump Tower in Moscow before the presidential election. Trump Jr. told the Senate Judiciary Committee in 2017 he was only “peripherally aware” of the proposal.

The panel has also investigated a meeting between Trump Jr., other campaign staff and a Russian lawyer. Emails leading up to the meeting promised dirt on Hillary Clinton.

Mueller’s report, released last month, says Cohen recalled being in Trump’s office “when Trump Jr. told his father that a meeting to obtain adverse information about Clinton was going forward.” The report notes that Trump Jr. told the Senate Judiciary Committee, however, that he did not inform his father about the emails or the upcoming meeting.

Cohen reported to federal prison this week to start a three-year sentence for crimes including tax evasion and campaign finance violations related to hush-money payments made to protect his former boss.

A spokeswoman for the committee would not confirm the subpoena. But Maine Sen. Susan Collins, a Republican member of the panel, hinted after Cohen spoke behind closed doors to the Senate intelligence panel that the committee would want to talk to Trump Jr. again. She said senators “clearly need to re-interview some witnesses whose accounts (Cohen) contradicts.”

The Senate intelligence committee has been investigating Russian election interference and Trump’s ties to Russia for the last two years. The panel is expected to try to call in several witnesses as it winds up its investigation over the next several months.

Burr told The Associated Press last week that he doesn’t expect to have any more public hearings and that he hopes to be finished with the investigation by the end of the year.

The subpoena puts Burr at odds with some of his Republican colleagues who want to move on after the release of Mueller’s findings. The Mueller report said he could not establish a criminal conspiracy between the Trump campaign and Russia, but he did not reach a conclusion on whether Trump obstructed justice.

Senate Majority Leader Mitch McConnell gave a floor speech Tuesday in which he declared “case closed” on the probe.

Kentucky Sen. Rand Paul took a shot at Burr after the subpoena was reported, tweeting that “apparently the Republican chair of the Senate Intel Committee didn’t get the memo from the Majority Leader that this case was closed.”

Alan Futerfas, a lawyer for Trump Jr., did not immediately respond to multiple messages seeking comment.

The subpoena was first reported by Axios.