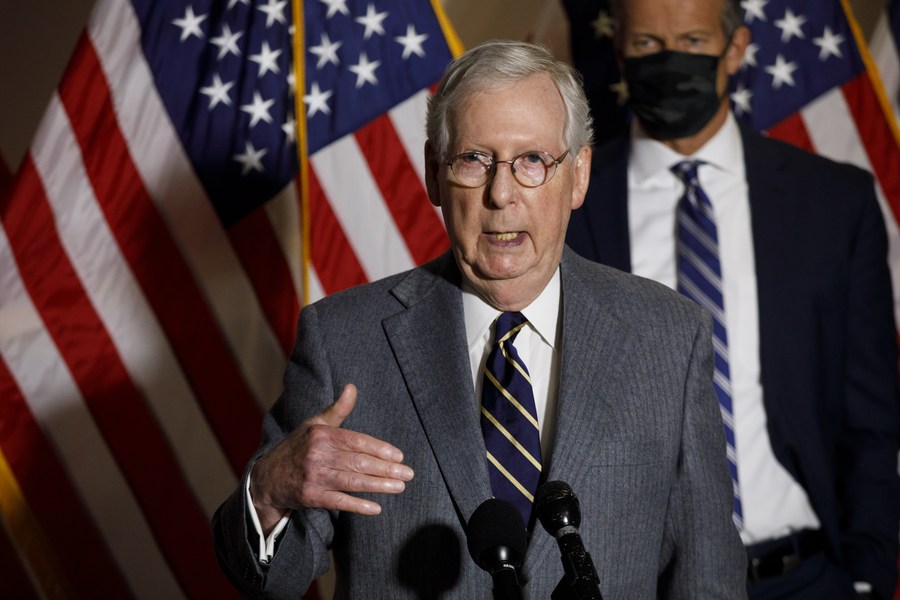 WASHINGTON, Dec. 31 (Xinhua) -- U.S. Senate Majority Leader Mitch McConnell on Thursday rejected again to hold a vote on a standalone bill to boost stimulus checks to 2,000 U.S. dollars for individuals from 600 dollars, which had been approved by the Democrats-held House of Representatives.

"Washington Democrats took President Trump's suggestion and skewed it so the checks would benefit even more high-earning households," McConnell said on the Senate floor, adding the COVID-19 pandemic had affected rich and poor Americans differently.

"Our colleagues who purport to be the champions of vulnerable Americans now say that what struggling people really need is for Congress to stop focusing on targeted relief for them specifically, and to instead send thousands of dollars to people who don't need the help," he said.

McConnell noted that former U.S. Treasury Secretary Larry Summers also said there is "no good economic argument" for more non-targeted checks with no linkage to need.

Citing a report from The New York Times, McConnell said that a majority of the households that get non-targeted checks do not end up spending them on urgent needs, but rather, just add to their savings.

McConnell's remarks came as Democrats have pressed the Senate Republican leader to hold a separate vote on a House-passed bill to increase the amount of stimulus checks.

"Just give us a vote on the House-passed bill, and we can vote on whatever right-wing conspiracy theory you like," Senate Democratic Leader Chuck Schumer said Thursday on the Senate floor.

"Senate Majority Leader Mitch McConnell looks to be trying to poison the move by attaching additional requests by Trump including an election review and the end of Section 230 protections for internet providers that are anathema to Democrats," Tim Duy, professor of the University of Oregon, wrote Thursday in a blog post.

"Even if not passed, there is a growing sense that Democrats will win both the special Senate elections in Georgia; if that occurs, Democrats will control the agenda in 221 and $2,000 checks will be even more likely," Duy wrote.

U.S. President Donald Trump recently asked Congress to boost stimulus checks to 2,000 dollars after the House and the Senate had passed a 900-billion-dollar relief package, which would give 600 dollars of direct payments to individuals.

The president's call was embraced by Democrats, who have advocated for higher direct payments, but was frowned upon by some Republicans, who aimed to hold down the plan's overall cost.