WORLD US Senate panel backs assessment that Russia interfered in 2016

US Senate panel backs assessment that Russia interfered in 2016 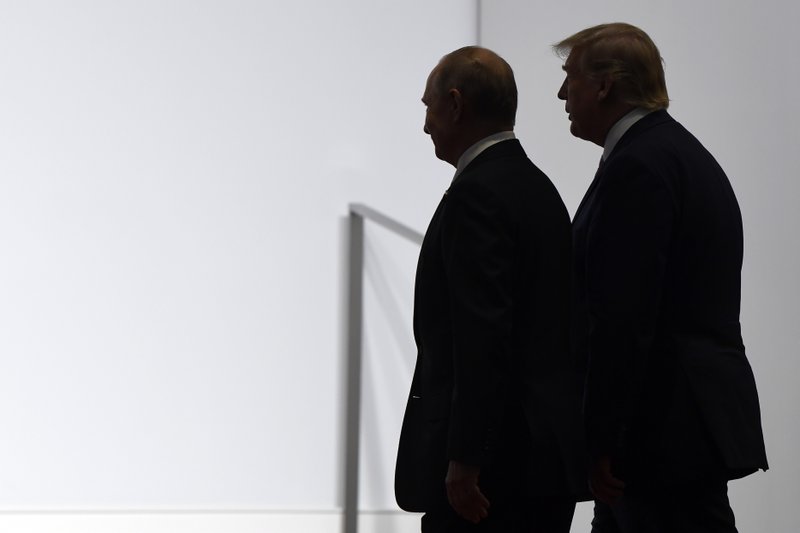 In this June 28, 2019, file photo, President Donald Trump and Russian President Vladimir Putin walk to participate in a group photo at the G20 summit in Osaka, Japan. An odd new front in the U.S.-Russian rivalry has emerged as a Russian military cargo plane bearing a load of urgently needed medical supplies landed in New York’s JFK airport. (Photo: AP)

The heavily redacted report from the Senate Intelligence Committee is part of the panel’s more than three-year investigation into the Russian interference. The intelligence agencies concluded in January 2017 that Russians had engaged in cyber-espionage and distributed messages through Russian-controlled propaganda outlets to undermine public faith in the democratic process, hurt Democratic candidate Hillary Clinton and help Donald Trump.

President Trump has repeatedly questioned the assessment, which was also confirmed by former special counsel Robert Mueller in his report last year. Mueller concluded that Russian interference was “sweeping and systematic,” but he did not find a criminal conspiracy between Russia and the Trump campaign.

Senate Intelligence Committee Chairman Richard Burr, R-N.C., said in a statement that his panel “found no reason to dispute” the intelligence community’s conclusions, saying they reflected strong tradecraft and analytical reasoning. He said the agencies’ conclusion that such election interference is “the new normal” has been borne out in the three years since it was published.

“With the 2020 presidential election approaching, it’s more important than ever that we remain vigilant against the threat of interference from hostile foreign actors,” Burr said.

The Senate report endorsed the core conclusions of the intelligence community assessment that Russia had interfered on a grand scale in the 2016 U.S. presidential election and that Russian President Vladimir Putin directed the interference. “The Committee found that specific intelligence as well as open source assessments support the assessment that President Putin approved and directed aspects of this influence campaign,” the Senate report states.

The panel also said it found that the intelligence community had presented sufficient information to support its conclusion that Russia had developed a preference for Trump over Clinton in the election.

The Senate report includes a two-page statement from Democratic Sen. Ron Wyden, who says the committee’s work makes clear that the intelligence community’s findings on Russian interference are “not a ‘hoax’” just because Putin denies it.

“Russian interference in the 2016 election is a fact, and Donald Trump’s deference to Putin only serves to further Russian disinformation and undermine efforts to defend the United States against ongoing attacks,” Wyden wrote.

The final report comes almost two years after the panel first released its findings agreeing with the intelligence community’s 2017 conclusions. The report was delayed as intelligence agencies reviewed it for declassification, and much of the report remains redacted. To write the report, the committee reviewed thousands of pages of documents and conducted interviews with intelligence officials.

This is the fourth of five reports the Senate panel will release on the meddling. Previous reports reviewed Russian efforts to breach state election systems and manipulate social media, and made recommendations to prevent more interference in the future. Another examined the mistakes of former President Barack Obama’s administration as Russia interfered.

The committee’s fifth, and final, report will examine counterintelligence findings, including whether Trump’s campaign conspired with Russia. It’s unclear when that will be released.