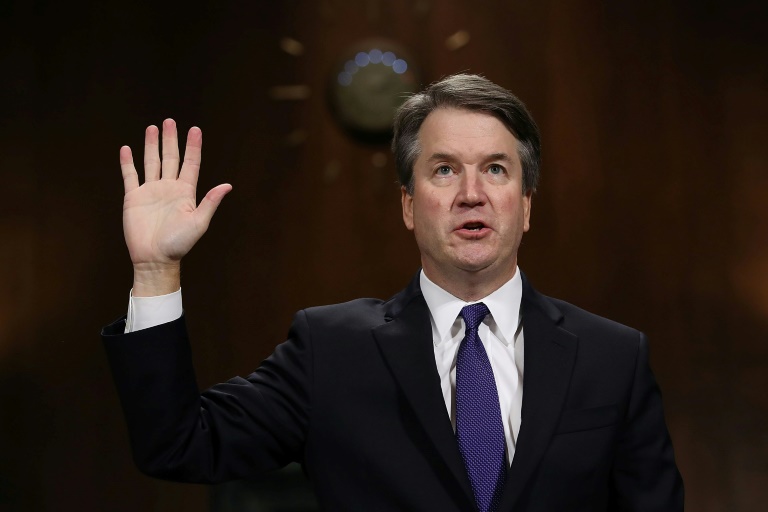 Brett Kavanaugh testifies at the US Senate Judiciary Committee, is expected to be confirmed as the next Supreme Court justice in a Senate vote on October 6, 2018. (Photo: AFP)

The US Senate is expected to confirm conservative judge Brett Kavanaugh as the next Supreme Court justice on Saturday -- offering President Donald Trump a big political win and tilting the nation's high court decidedly to the right.

The months-long battle over Kavanaugh's nomination has gripped Washington, laying bare the partisan gridlock on Capitol Hill and the political polarization of America just a month before midterm elections.

The Senate vote, set to begin from 3:30 pm, will bring an end to a raucous nomination process defined by harrowing testimony from a woman who says Kavanaugh tried to rape her when they were teenagers -- and by his fiery rebuttal.

If Kavanaugh is confirmed, Trump will have succeeded in having his two picks seated on the court -- a major coup for the Republican leader less than halfway through his term.

Kavanaugh's promotion to the Supreme Court will also stand as a demoralizing defeat for Democrats who battled hard to block the 53-year-old judge at all costs.

His confirmation was all but sealed on Friday when he won the support of key Senate Republican Susan Collins and conservative Democrat Joe Manchin.

Their statements of support brought the number of senators supporting Kavanaugh to 51 in the 100-member chamber.

"This is a great day for America," Senate Majority Leader Mitch McConnell told Fox News late Friday, congratulating his colleagues for "refusing to roll over under all of this intense pressure."

Kavanaugh's nomination as a replacement for retiring justice Anthony Kennedy was controversial from the start -- but the initial focus was solely on the conservative views held by the married father of two.

His ascent to the Supreme Court was thrown into doubt last week after university research psychologist Christine Blasey Ford testified that he had sexually assaulted her at a Washington area party in the early 1980s.

The brutal hearing sparked a supplemental FBI dive into Kavanaugh's background and a week-long delay of the Senate vote.

While many senators say they were satisfied with the FBI probe, her lawyers say the investigation was insufficient.

"An FBI investigation that did not include interviews of Dr. Ford and Judge Kavanaugh is not a meaningful investigation in any sense of the word," they said in a statement quoted in US media.

Collins -- a moderate Republican from Maine -- said Kavanaugh was entitled to the "presumption of innocence" as the allegations against him were not substantiated with corroborating evidence.

While acknowledging that Blasey Ford's testimony was "sincere, painful and compelling," Collins added: "We will be ill-served in the long run if we abandon the presumption of innocence and fairness."

Immediately after that speech, Manchin announced his support, calling Kavanaugh a "qualified jurist" who "will not allow the partisan nature this process took to follow him onto the court."

Manchin faces extraordinary political pressure. He is up for re-election in West Virginia, a state Trump won overwhelmingly in 2016.

The stage was set for Saturday's final confirmation when the Senate ended debate on the nomination on Friday with a procedural 51-49 vote -- a move cheered by Trump, who said he was "very proud."

If he wins confirmation, Kavanaugh -- who saw questions raised during the bruising confirmation process over his candor, partisan rhetoric and lifestyle as a young man -- will seal a conservative majority on the nine-seat high court, possibly for decades to come.

His nomination has been met with loud protests, both in Washington and in other cities across the United States. On Friday, more than 100 people were detained on Capitol Hill.

Around 200 protesters gathered early Saturday outside the Capitol brandishing banners and chanting: "Hey hey, ha ha, we don't want no Kavanaugh," or "November is coming" and "Shame on you!"

Authorities took the very rare step of putting up low metal fences around the Capitol, keeping the public some distance from the building and allowing only credentialed staff to pass.

Trump tweeted that the demonstrators included female Kavanaugh supporters who were massing all over Capitol Hill.

"It is a beautiful thing to see - and they are not paid professional protesters who are handed expensive signs. Big day for America!," he said, in a swipe at the anti-Kavanaugh activists.

The president claimed on Friday that billionaire financier George Soros, a Democratic funder and frequent target of conservatives, was behind the demonstrations against his nominee.

Alaska Senator Lisa Murkowski was the only Republican to break ranks in Friday's cloture vote.

She described her decision to oppose Kavanaugh as "agonizing," and said that while she hopes he will be a "neutral arbiter" on the court, he was not "the right person for the court at this time."

However, while she plans to vote "no" on Saturday, Murkowski said she would ask to be recorded as "present" in the final tally "as a courtesy" to a fellow Republican so he can attend his daughter's wedding instead of returning to Washington to vote.

"It will not change the outcome of the vote, but I do hope that it reminds us that we can take very small, very small steps to be gracious with one another," Murkowski said late Friday on the Senate floor.

"We owe it to the people of America to return to a less rancorous process."