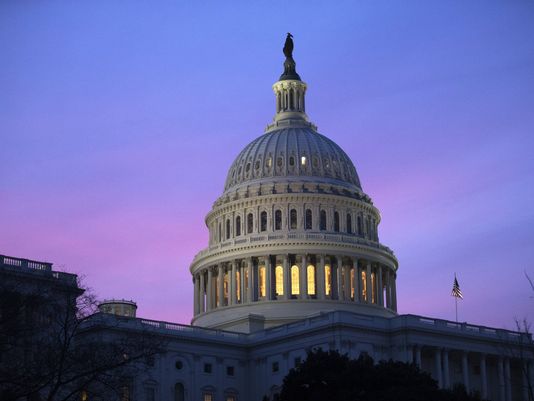 WASHINGTON, Dec. 19 (Xinhua) -- US Senate Majority Leader Mitch McConnell on Wednesday introduced a short-term funding bill that would fund the government through Feb. 8 and avoid a partial government shutdown on Friday when funding for several federal agencies expires.

"Later this morning, we'll introduce a continuing resolution that will ensure continuous funding for the federal government," McConnell said. "The measure will provide the resources necessary to continue normal operations through February 8th."

The Republican congressional leader's proposed bill, which senators will vote on later in the day, denied President Donald Trump the 5 billion US dollars he wants for building a wall on the US-Mexico border, which has been at the center of a partisan dispute over which Trump has vowed to proudly paralyze the government.

Senate Majority Whip John Cornyn, a Republican from Texas, said Trump is supportive of the stopgap legislation but could still change his mind. White House counselor Kellyanne Conway told reporters the president will "certainly" look at legislation that keeps the government running until February.

Earlier Wednesday, the president said Mexico is indirectly paying for his pledged border wall via a new trade agreement, echoing the White House's effort to unknot the partisan gridlock.

"Mexico is paying (indirectly) for the Wall through the new USMCA, the replacement for NAFTA!" Trump wrote in a morning tweet, referring to the United States-Mexico-Canada Agreement signed on Nov. 30 to replace the three nations' trilateral North America Free Trade Agreement in place since 1994.

The president's remarks seem to be a backdown, at least tactically, from his earlier request that Congress approve the wall-funding money in the 2019 budget package, which Democratic lawmakers have squarely opposed.

The tweet also came one day after White House Press Secretary Sarah Sanders told reporters that the administration would support the Senate's bipartisan appropriation measure for the Department of Homeland Security (DHS) that provides 26 billion dollars, including 1.6 billion dollars for fencing and other barriers on the border. The DHS is one of the federal agencies that will be drained of funding.

"That's something that we would be able to support as long as we can couple that with other funding resources," Sanders said of the measure, which was approved by a bipartisan vote in the Senate Committee on Appropriations but was rejected by most of the House Democrats.

Senate Minority Leader Chuck Schumer, a Democrat from New York, initially said the appropriation measure could be an option that will avoid the shutdown but changed his mind last week when he and House Minority Leader Nancy Pelosi met Trump at the White House, a meeting that turned out to be a contentious public showdown.

Schumer said the appropriation is no longer a viable solution because the 1.6 billion-dollar wall funding cannot pass in House vote.

A partial government closure, though seemingly ever more unlikely now, would render nine to 15 Cabinet-level departments and dozens of agencies dysfunctional, including departments of Homeland Security, Transportation, Interior, Agriculture, State and Justice, as well as national parks and forests.

It will disrupt the jobs of over 800,000 federal employees, half of whom would have to work without pay.