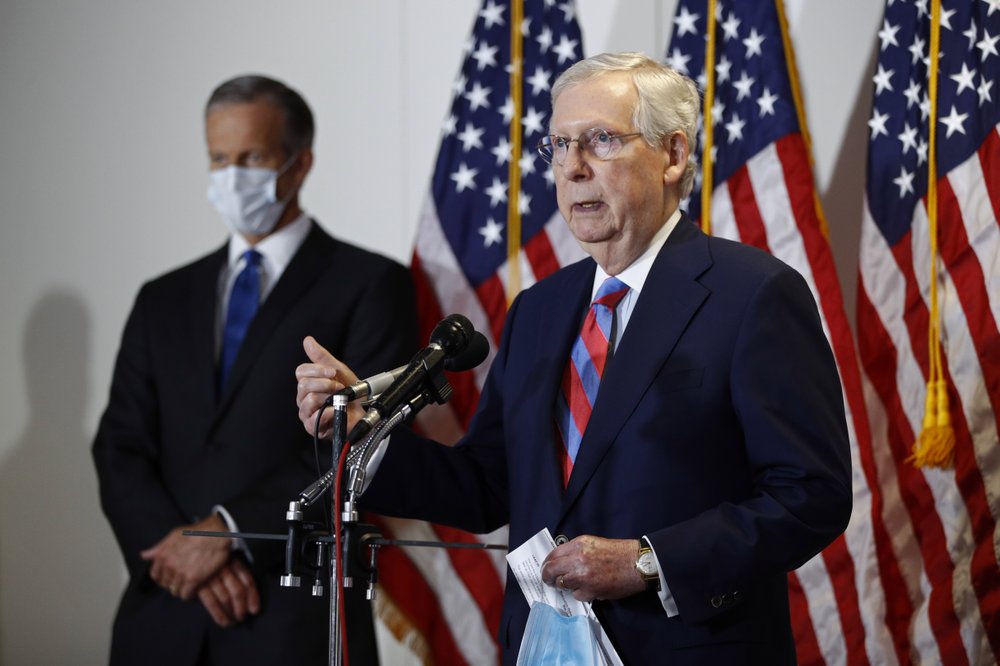 US Senate Majority Leader Mitch McConnell of Ky., speaks at a news conference on Capitol Hill in Washington, Tuesday, May 12, 2020. (Photo: AP)

The US Senate has passed legislation that would extend a set of expired federal surveillance tools designed to help law enforcement officials track suspected terrorists and spies, moving one step closer to reviving them.

The legislation passed the Senate 80-16 on Thursday. The bill is a bipartisan compromise that has the support of House Speaker Nancy Pelosi and Senate Majority Leader Mitch McConnell. The Justice Department, which had been part of the negotiations, said it appreciated that the expired authorities had been reauthorized but expressed disappointment with the tweaked version of the bill that ultimately passed.

It’s unclear how quickly the legislation can become law. The House passed the bill in March, but will have to pass it again due to a change in the Senate. The House has been holding votes on a limited basis due to the coronavirus pandemic.

President Donald Trump has said he will support the compromise, but GOP senators who are longtime skeptics of federal surveillance have tried to change his mind. They want him to veto it.

The bill would renew the expired surveillance authorities and impose new restrictions to try to appease civil liberties advocates in both parties.

The provisions at issue allow the FBI to get a court order for business records in national security investigations, to conduct surveillance without establishing that the subject is acting on behalf of an international terrorism organization, and to more easily continue eavesdropping on a subject who has switched cellphone providers to thwart detection.

“The attorney general and members of Congress have worked together to craft a compromise solution that will implement needed reforms while preserving the core national security tools,” McConnell said on the Senate floor Wednesday. “These intense discussions have produced a strong bill that balances the need for accountability with our solemn obligation to protect our citizens and defend our homeland.”

McConnell urged senators to vote against amendments altering the bill. He said the legislation was already a “delicate balance” and warned changing it could mean the underlying provisions won’t be renewed.

“We cannot let the perfect become the enemy of the good when key authorities are currently sitting expired and unusable,” McConnell said on the Senate floor before the vote.

But senators adopted one amendment anyway, with more than three-fourths of the chamber supporting it. Another amendment came just one vote short of the 60 votes needed.

The successful amendment, from Republican Sen. Mike Lee of Utah and Democratic Sen. Patrick Leahy of Vermont, would boost third-party oversight to protect individuals in some surveillance cases. It was adopted 77-19.

In a statement, Justice Department spokesman Marc Raimondi said the department appreciates the Senate’s vote but that, as amended, the legislation “would unacceptably degrade our ability to conduct surveillance of terrorists, spies and other national security threats.”

The proposal that fell just short of 60 votes would have prevented federal law enforcement from obtaining internet browsing information or search history without seeking a warrant.

“Should law-abiding Americans have to worry about their government looking over their shoulders from the moment they wake up in the morning and turn on their computers to when they go to bed at night?” said Democratic Sen. Ron Wyden of Oregon. “I believe the answer is no. But that’s exactly what the government has the power to do without our amendment.”

Wyden co-sponsored the proposal with Republican Sen. Steve Daines of Montana. Julian Sanchez, a senior fellow at the Cato Institute, a think tank, said the near-adoption of the amendment “suggests a sea change in attitudes” about surveillance.

A third amendment, by Sen. Rand Paul, R-Ky., a longtime skeptic of surveillance programs, was soundly defeated 11-85. It would have required the government to go to a traditional federal court, instead of the secretive Foreign Intelligence Surveillance Court, to get a warrant to eavesdrop on an American in a national security investigation.

The congressional debate coincides with internal efforts by the FBI and Justice Department to overhaul their surveillance procedures after a harshly critical inspector general report documented a series of problems in the FBI’s investigation into ties between Russia and the 2016 Trump campaign.

The report identified significant errors and omissions in applications that were submitted in 2016 and 2017 to monitor the communications of former Trump campaign adviser Carter Page.

Though the problems revealed by the Russia investigation relate more to the accuracy of surveillance applications than to the effectiveness of the expired tools at issue Thursday, they nonetheless drew additional scrutiny to the government’s spy powers as well as concerns from some in Congress that those authorities should be reined in.

The FBI has announced steps designed to ensure that the application process is more accurate and thorough, and that information that cuts against the premise of the requested surveillance is fully disclosed to the court.