US senator John McCain dead at 81 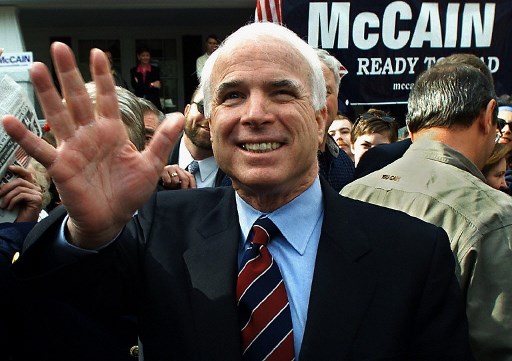 "Senator John Sidney McCain III died at 4:28 pm on August 25, 2018. With the senator when he passed were his wife Cindy and their family," his office said in a statement.

McCain was a conservative maverick and a twice-defeated presidential candidate.

McCain was diagnosed in July 2017 with glioblastoma - a virulent brain cancer - one week after doctors removed a blood clot from above his left eye. He underwent surgery for an intestinal infection in this April.

On August 24, five days before his 82nd birthday, his family announced that "with his usual strength of will, he has now chosen to discontinue medical treatment."

Condolences came swiftly from the highest reaches of American politics after his passing. President Donald Trump, who once mocked McCain's war record, tweeted his "deepest sympathies and respect"  to McCain's family.

McCain had been a rare and outspoken Republican critic of Trump, accusing him of "naïveté," "egotism" and of sympathizing with autocrats.

Top image: In this file photo taken on January 08, 2000 GOP presidential hopeful US Senator John McCain (R-AZ) waves during an "Old Fashion BBQ and Stump Meeting" on the front yard of a supporter's house in Camden, South Carolina. (AFP Photo)

(WIth input from AFP)