WORLD US senators to be sworn in for Trump impeachment trial

US senators to be sworn in for Trump impeachment trial 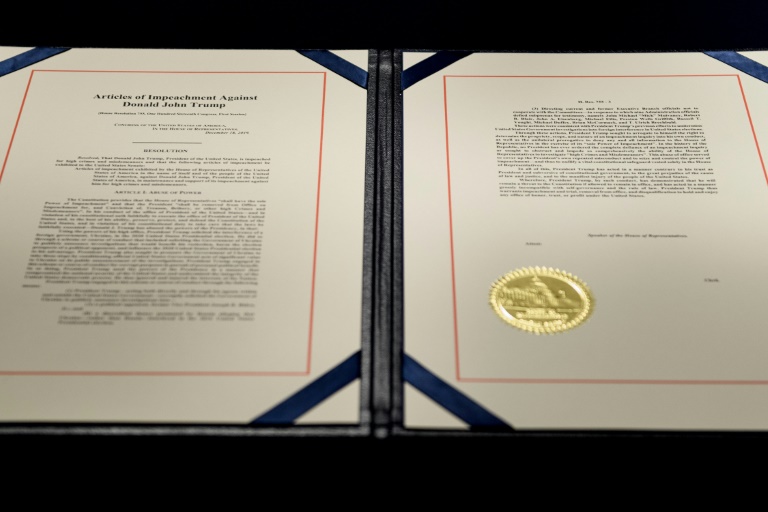 The articles of impeachment against US President Donald Trump. (Photo: AFP)

Amid bitter partisan divisions, US senators are to be sworn in as jurors Thursday for the historic impeachment trial of President Donald Trump, threatened with removal from office for abuse of power and obstruction of Congress.

Supreme Court Chief Justice John Roberts will deliver the oath to the 100 senators and preside over just the third impeachment trial of a chief executive in US history.

The solemn proceedings will begin at noon (1700 GMT) when the members of the House of Representatives who will serve as prosecutors read out the two articles of impeachment against Trump.

Roberts, 64, who was appointed chief justice by president George W. Bush, will be sworn in at 2:00 pm (1900 GMT) to preside over the trial and deliver the oath to senators.

The proceedings will then adjourn and the trial will get underway "in earnest" on Tuesday, according to Republican Senate leader Mitch McConnell.

Impeachment rules require a two-thirds Senate majority to convict and remove a president and Trump's acquittal is widely expected in the Republican-dominated Senate.

Trump is accused of abuse of power for withholding military aid to Ukraine and a White House meeting for the country's president in exchange for an investigation into his potential presidential election rival Democrat Joe Biden.

The Government Accountability Office concluded in a report released Thursday that the White House violated federal law by putting a hold on the congressionally-approved funds for Ukraine.

"Faithful execution of the law does not permit the President to substitute his own policy priorities for those that Congress has enacted into law," according to the GAO, a congressional watchdog.

The second article of impeachment -- for obstruction of Congress -- relates to Trump's refusal to provide witnesses and documents to House impeachment investigators in defiance of congressional subpoenas.

'The Senate's time is at hand'

McConnell has been extremely critical of Trump's December 18 impeachment by the Democratic-controlled House and pledged on Thursday that things would be different in the Senate.

"It was a transparently partisan performance from beginning to end," McConnell said. "But it's not what this process will be going forward.

"This chamber exists precisely so that we can look past the daily drama," the Republican senator from Kentucky said. "The House's hour is over. The Senate's time is at hand."

The two articles of impeachment were delivered to the Senate on Wednesday in a solemn procession by the seven House Democrats who will prosecute the case against the 45th US president.

"So sad, so tragic for our country, that the actions taken by the president to undermine our national security, to violate his oath of office and to jeopardize the security of our elections, has taken us to this place," Democratic House Speaker Nancy Pelosi said as she signed the articles.

"This president will be held accountable," she said. "No one is above the law."

AFP / Brendan Smialowski"This president will be held accountable" : US Speaker of the House Nancy Pelosi signs the articles of impeachment against US President Donald Trump

Adam Schiff, the Democratic lawmaker tapped to lead the prosecution team, said the House managers will be "carrying out the will of the framers of our Constitution, and that's a pretty serious load."

Pelosi held back on delivering the articles to the Senate as she pressured McConnell to agree to subpoena the witnesses and documents that the White House blocked from the House probe.

McConnell has refused to commit, saying the issue will only be decided after the trial's opening arguments and questioning.

A Trump administration official told reporters they expect the trial to last no longer than two weeks, suggesting McConnell could use his 53-47 Republican majority to stifle calls for witnesses and quickly take the charges to a vote.

Trump ridiculed the investigation and trial on Wednesday, as he has for months.

"Here we go again, another Con Job by the Do Nothing Democrats," he wrote on Twitter.

They also showed the two, working with Ukrainian officials, trying to force out the US ambassador to the country, Marie Yovanovitch, eventually removed by Trump.

In a televised interview Wednesday, Parnas told MSNBC that "President Trump knew exactly what was going on."

"He was aware of all of my movements. I wouldn't do anything without the consent of Rudy Giuliani or the president," Parnas said.