US sending troops to Kabul airport to support embassy drawdown

WASHINGTON, Aug. 12 (Xinhua) -- The United States said on Thursday that it will deploy thousands of troops to Kabul airport to support embassy staff drawdown as the security situation in Afghanistan continues to deteriorate. 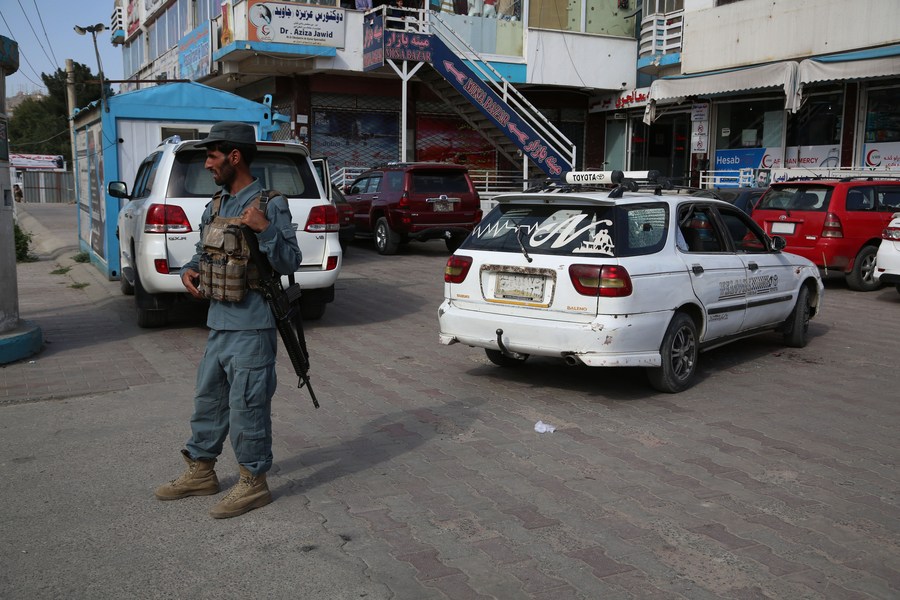 A policeman is seen at the site where Afghan senior official Dawa Khan Menapal was shot dead in Kabul, Afghanistan, on Aug. 6, 2021. (Photo by Sayed Mominzadah/Xinhua)

"We are further reducing our civilian footprint in Kabul, in light of the evolving security situation. We expect to draw down to a core diplomatic presence in Afghanistan in the coming weeks," State Department spokesperson Ned Price told reporters in a daily briefing.

"In order to facilitate this reduction, the Department of Defense will temporarily deploy additional personnel to Hamid Karzai international airport," he added.

He said that the embassy remains open, and the United States plans to continue diplomatic work in the country. Earlier in the day, the embassy urged Americans to leave the country immediately.

Pentagon Press Secretary John Kirby told reporters that three infantry battalions, about 3,000 troops, will be deployed to Kabul airport within 24 to 48 hours.

In addition, around 1,000 personnel of a joint U.S. Army and Air Force support team will be sent to Qatar to facilitate the processing of Afghan applicants for Special Immigrant Visas (SIV). An infantry brigade combat team will arrive in Kuwait next week in case additional forces are needed.

"This is a temporary mission with a narrow focus," said Kirby, calling the move "a prudent thing to do given the rapidly deteriorating security situation in and around Kabul."

According to media reports, currently, there are about 650 U.S. troops in the country and about 1,400 U.S. staff at the embassy.

The announcement of embassy staff reduction and military reinforcements came as Taliban militants made rapid military advances across the country.

The situation in the war-torn country has been worsening since the withdrawal of U.S.-led troops starting on May 1. Many Afghan cities and about half of the country's 34 provinces in recent weeks have seen heavy battles and street fighting between Afghan forces and Taliban militants.

President Joe Biden ordered the U.S. military to end its mission in Afghanistan by the end of this month.

He said on Tuesday that the United States would continue to provide air support and military equipment to Afghanistan while noting Afghan forces must "fight for themselves, fight for their nation."

"We're going to continue to keep our commitment. But I do not regret my decision," he said.