WORLD US should stop shilly-shallying by moving decisively to sanction-lifting: Chinese envoy

US should stop shilly-shallying by moving decisively to sanction-lifting: Chinese envoy

VIENNA, June 12 (Xinhua) -- The United States should stop shilly-shallying by moving decisively to complete and thorough sanction-lifting, a Chinese envoy said Saturday as a new round of talks to revive the 2015 Iran nuclear deal, officially known as the Joint Comprehensive Plan of Action (JCPOA), started. 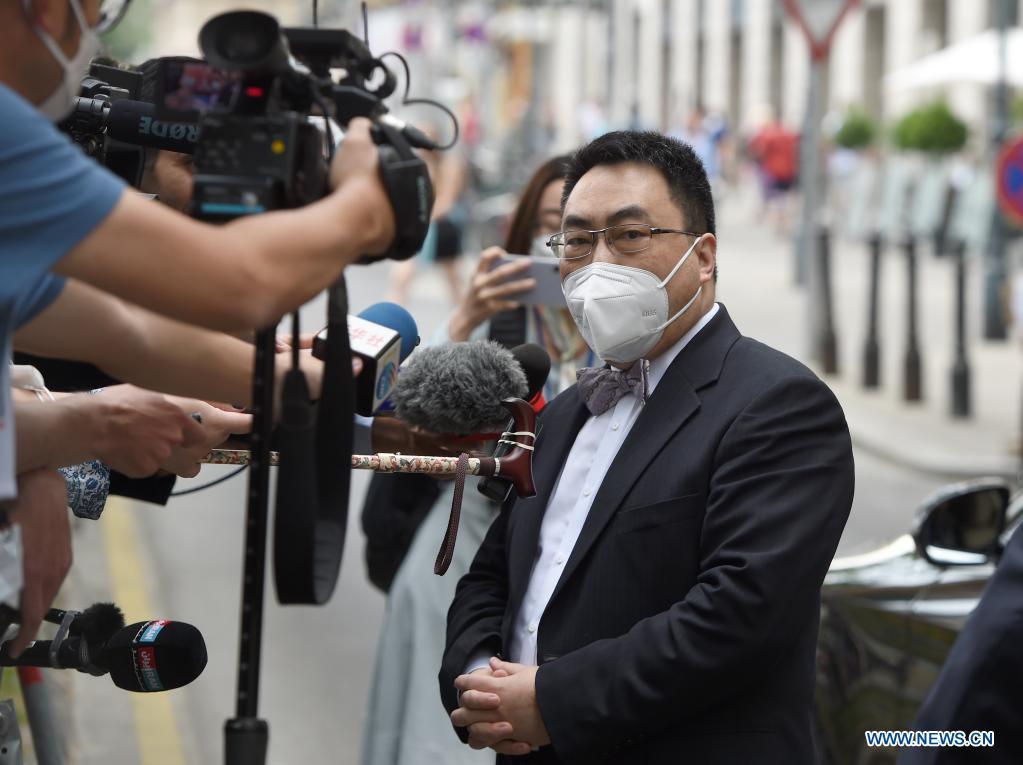 Wang Qun (R, Front), Chinese envoy to the United Nations and other international organizations in Vienna, is interviewed after a meeting of the Joint Comprehensive Plan of Action (JCPOA) Joint Commission in Vienna, Austria, on June 12, 2021. (Photo: Xinhua)

Wang Qun, Chinese envoy to the United Nations and other international organizations in Vienna, made the remarks after the latest meeting of the JCPOA Joint Commission, chaired by European Union (EU) official Enrique Mora and attended by representatives from China, France, Germany, Russia, Britain and Iran.

The talks have entered the 11th week and are in the final stages, but negotiations over sanction-lifting and related issues have been dragging on and yet to be resolved, Wang said.

"Iran's concerns about this issue are legitimate and reasonable," Wang said, noting that in order to resume full compliance with the JCPOA, the United States should first lift its unilateral sanctions against Iran, including "long-arm jurisdiction" against third-party entities and individuals.

The U.S. conventional arms embargo on Iran, which is inconsistent with the JCPOA and relevant resolutions of the United Nations (UN) Security Council, should also be completely removed, said the Chinese diplomat.

The United States lifted some sanctions on Thursday, but it looks somewhat like they were "shilly-shallying," Wang said. Now that the United States has made the political decision to return to the JCPOA, all relevant sanctions should be lifted "in a complete, clean and thorough manner," he added.

At the same time, through negotiations, practical and effective measures should be taken to prevent the relevant parties from arbitrarily withdrawing from the JCPOA again and re-imposing sanctions, noted the Chinese diplomat.

In the current final stage of the negotiations, it is hoped that all parties concerned will redouble their efforts, maintain a rational and pragmatic attitude and reach a package of solutions as soon as possible, he added.

Alain Matton, an EU spokesperson, told journalists on Saturday that the EU will continue with the talks with all the participants to the JCPOA and separately with the United States "to find ways to get very close to a final agreement in the coming days."

Matton quoted Mora as saying a few days ago at a UN Security Council meeting that they are "working non-stop to revive the JCPOA in all its aspects, specifically the nuclear activities and the sanction-lifting."

"We are making progress but the negotiations are intense on a number of issues including on how steps are to be implemented," said the spokesperson.