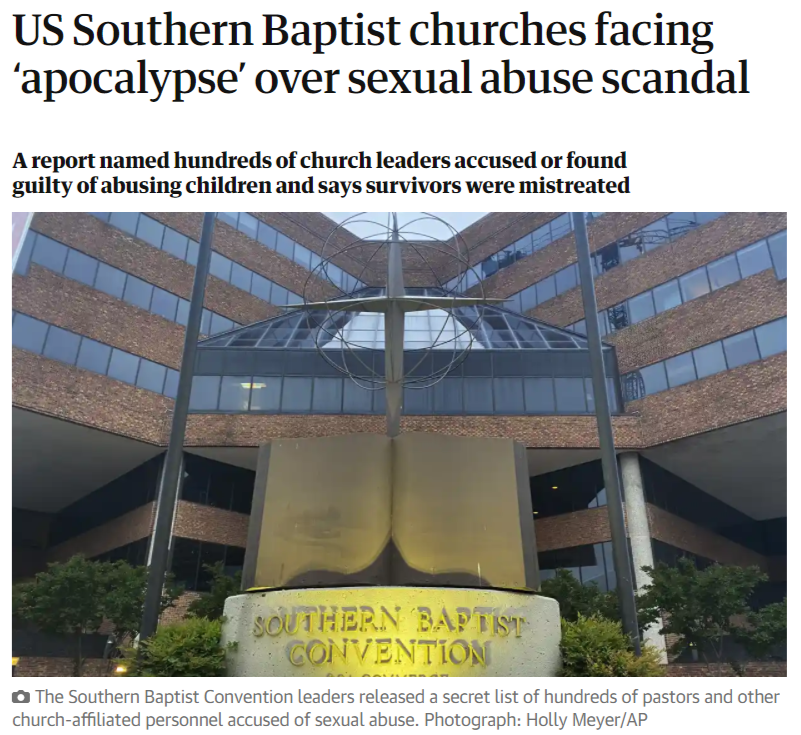 Screenshot of a report about the Southern Baptist Convention (SBC) on the Guardian website. [Photo: Xinhua]

LONDON - Southern Baptist Convention (SBC), the United States' largest Protestant denomination, has been shaken by the investigative findings that hundreds of church leaders were accused or found guilty of sexual abuse of children and related cover-ups, British newspaper The Guardian has reported.

Citing a 205-page list SBC has recently released, The Guardian reported on Sunday that there were 700 entries on cases between 2000 and 2019.

The list named hundreds of Baptist leaders and members accused or found guilty of sexual abuse of children.

The list "reminds us of the devastation and destruction brought about by sexual abuse. Our prayer is that the survivors of these heinous acts find hope and healing, and that churches will utilize this list proactively to protect and care for the most vulnerable among us," said SBC leaders Rolland Slade and Willie McLaurin in a statement.

According to the Guardian report, SBC, America's second-largest Christian denomination, is one of the most politically powerful religious groups in the country.

Apart from sexual abuse scandal and cover-ups, it has a racist past. A study about the history of the SBC published last year found that SBC sided with racist segregationists in the past. In more recent times the SBC has been criticized for debating critical race theory, an academic discipline that studies institutional racism in US laws and society.