JERUSALEM, Nov. 19 (Xinhua) -- The United States took a sharp policy turn on Monday by saying that it no longer considers Israeli settlements in the West Bank a violation of international law. 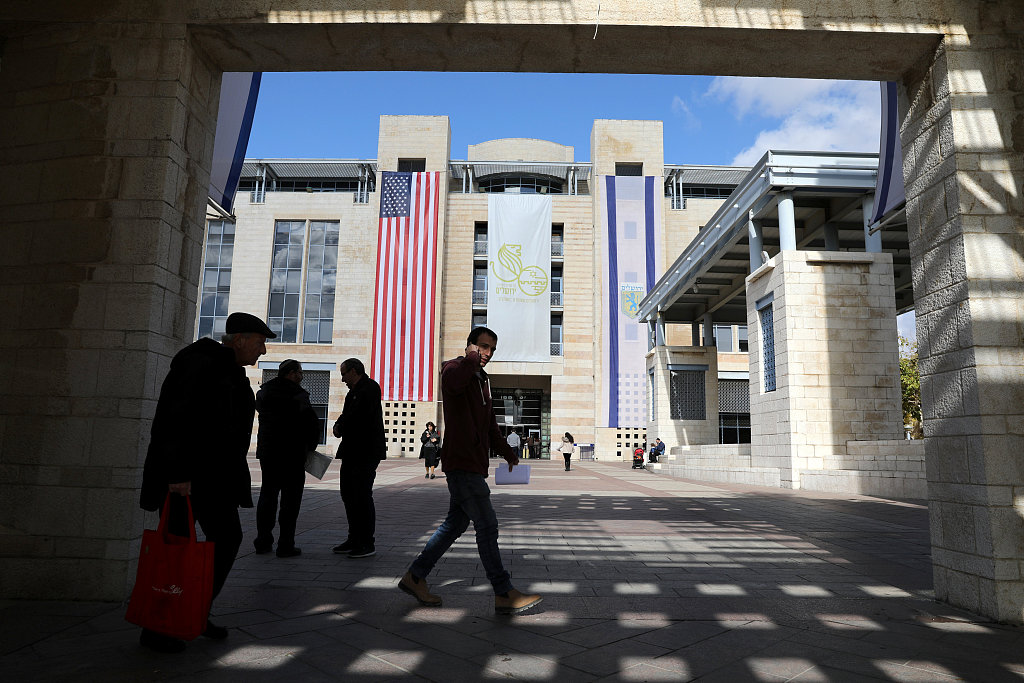 The contentious announcement was made by U.S. Secretary of State Mike Pompeo.

This is a reversal of a U.S. policy that has been in place since 1978 that declared the settlements illegal.

Israel captured the West Bank in 1967 and immediately started settling the land.

Today there are hundreds of thousands of Jewish settlers in the area with Palestinian cities and villages dotting the territories.

Palestinians see the territories as the bulk of their future state. The majority of the international community sees the settlements as illegal and the Palestinians say Israeli settlement activity is land-grab, creating facts on the ground that make a future Palestinian state unviable.

"Israeli settlements steal the Palestinian land, seize and exploit Palestinian natural resources, and divide, displace and restrict the movement of the people of Palestine," read a statement by Saeb Erekat, secretary general of the Palestine Liberation Organization (PLO) Executive Committee.

The dramatic decision is in stark contrast to the UN Security Council's decision of late 2016 that declared the settlements "a flagrant violation" of international law. At the time, the decision was considered a major blow to Israel.

Since U.S. President Donald Trump entered the Oval Office, decades old policies towards the Israeli-Palestinian conflict have been gradually deconstructed.

Beginning with the recognition of Jerusalem as Israel's capital and the Golan Heights as Israeli territory, the closure of the PLO offices in Washington and stopping funding for a UN agency tasked with helping Palestinian refugees, the Trump administration has abandoned traditional U.S. policies with a bang and has alienated the Palestinians.

"Israel remains ready and willing to conduct peace negotiations with the Palestinians regarding all final status issues in an effort to achieve a durable peace but will continue to reject all arguments regarding the illegality of the settlements," said a statement released by the prime minister's office.

Netanyahu and Trump spoke on the phone after the announcement. The Israeli leader thanked the American leader for stating "the simple truth."

Netanyahu, who leads the hawkish right-wing bloc in Israel, has vowed to annex the West Bank territories if he remains the country's prime minister. A U.S. acceptance of Israeli presence on that land will help him deliver on his campaign promise.

For Palestinians, the U.S. announcement is yet another pro-Israeli move the Trump administration has made. While the decision is largely symbolic, it has the potential of changing things on the ground.

"It tells Israel that what it is doing in the occupied territories is acceptable," said Amneh Badran, a political scientist from the Al Quds University in Jerusalem. "With U.S. support, Israel can do everything to solidify its existence in the West Bank."

During the decade of Netanyahu's right-wing government, settlement activity in the West Bank intensified.

"The announcement will accelerate current trends, but does not create new policy," said Ofer Zalzberg, a senior analyst on Israeli-Palestinian affairs in the International Crisis Group, adding "it's provides tailwinds for those who wish to annex the West Bank."

In the current hostile climate between Israelis and Palestinians, the announcement is certainly not expected to bring the sides closer to the table. But as Palestinians feel that they have lost the sympathy of one of the world's most powerful countries, they once again face a difficult situation and increasingly understand they are alone.

"This will make negotiations between Israelis and Palestinians even harder," said Zalzberg.

As the current U.S. administration continues to take steps that are viewed as favorable to the Israeli right-wing, it makes it difficult for the United States to broker any agreement between the rivalling sides.

"It reduces the ability to bridge the gap between the sides," said Zalzberg.

"What is very dramatic in the developments is that the Israelis and Palestinians can now not even agree on a broker and thus negotiations cannot resume," added the expert.

For years, the Americans have tried to broker an agreement between the sides. The Trump administration has said it will publish a proposal in the near future in another attempt to forge peace between the sides. The Palestinians have already rejected the plan, largely because of the new policies adopted by the United States.

"By taking these steps, the Americans have taken themselves off the table," said Badran.