Washington (People's Daily) - Hospitals in the US state of Massachusetts are scrambling to bring in more ventilators by almost any means possible, including buying and rent-ing machines and repurposing other medical devices, in anticipation of an expected surge in critically ill corona-virus patients. 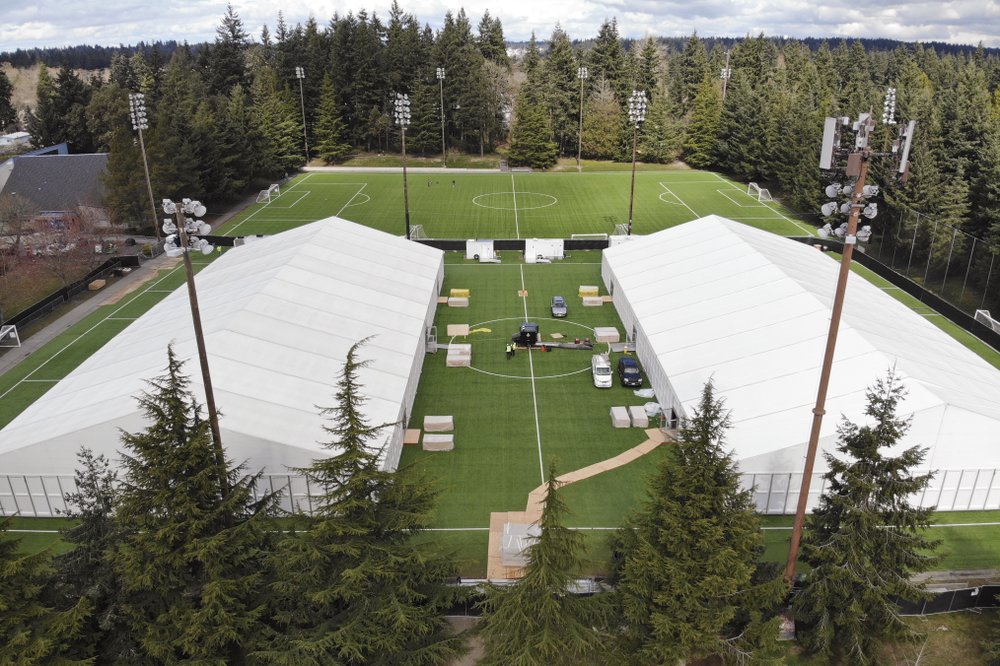 In this photo taken Tuesday, March 24, 2020, two massive temporary buildings meant for use as a field hospital for coronavirus patients stand together on a soccer field in the Seattle suburb of Shoreline, Wash. With US hospital capacity stretched thin, hospitals around the country are scrambling to find space for a coming flood of COVID-19 patients, opening older closed hospitals and repurposing other buildings. (Photo: AP)

Doctors in the state's largest hospitals said they have enough ventilators for the next couple of weeks. But they are worried about running out of the mechanical devices, which provide life-saving oxygen to patients with acute respiratory failure, a serious symptom of COVID-19. Those concerns came as figures released Wednesday showed that 1,838 people in Massachusetts had tested positive for the virus, an increase of 679 from the day before. Harvard University president Lawrence Bacow and his wife an-nounced they are among the infected.

So far, most patients admitted to Massachusetts hospitals with the illness have not required a ventilator, doctors said. In two large hospital systems, for example, about one-third of the 97 patients with COVID-19 were in inten-sive care units as of Monday; some of those patients re-quire mechanical ventilation, but not all.

As state data continues to reveal the ominous spread of the virus, the number requiring ventilators is certain to grow. And doctors said they believe Massachusetts is probably three to four weeks away from its peak number of residents becoming sick with the virus. Researchers at the Harvard T.H. Chan School of Public Health have fore-cast that if 20 percent of the state’s population gets in-fected, more than 24,000 patients — 2 percent of those in-fected — could require a ventilator at some point.

The exact number of fully equipped mechanical ventilators in the state is unclear, but one study suggests there are at least 1,400, which doctors say is far lower than the num-ber needed, even when considering that not all patients will need them at once.

Massachusetts does not have the worst supply of ventila-tors in the country, but it also does not have the best. Es-timates show that the state has 21.7 full-service ventila-tors per 100,000 residents — about 1,408 machines — slightly higher than the national average of 20.5 per 100,000 people. In two current hot spots of the pandemic, Washington only has 12.8 ventilators, while New York has 23.1.

Hospital leaders across the nation say they expect to see a rise in coronavirus patients. Many are now scrambling to find the medical supplies they need to treat those patients and others. A mad scramble for masks, gowns and ventila-tors is putting states against each other and driving up prices. Some hard-hit parts of the country are receiving fresh supplies of N95 masks, but others are still out of stock. Hospitals are requesting donations of masks and gloves from construction companies, nail salons and tat-too parlors, and considering using ventilators designed for large animals because they cannot find the kind made for people.

The market for medical supplies has descended into chaos, according to state officials and health-care leaders. “I can't find any more equipment. It’s not a question of money,” said New York governor Andrew Cuomo, whose state is battling the nation’s worst outbreak. “We need the federal help and we need the federal help now.”

At best, Cuomo said, his team has secured enough protec-tive gear for health workers to last a few weeks. It’s been unable to buy most of the 30,000 ventilators it estimates it will need to keep hospitalized patients breathing at the peak of the crisis, he said.

Hutchinson said Arkansas has $30 million to spend on supplies but must deal with a shortage. It also has to com-pete against other states, countries and the federal gov-ernment.

“The federal government bought up most of the domestic supply, put it in their national strategic storehouse, in which the states can request allocation of personal protec-tive equipment (PPE),” said Hutchinson. Federal govern-ment has only provided 25 percent of what Arkansas needs from the national stockpile. “Then after we exhaust that supply, we are on our own,” said Hutchinson.