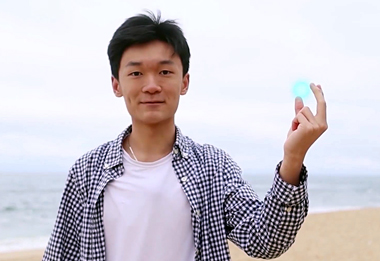 Jeffery Chen, a senior from Burlingame High School in Northern California, explained in his winning video the neutrino particle and its implications for astronomy, which enabled astronomers to look at high energy cosmic events, gaze at the core of stars and even look at the universe moments after it began.
"Science constantly evolves and gives us new perspectives on why the universe behaves the way it does, and we're fortunate to live in a time where the mysteries of the cosmos are being unlocked before our very eyes," he said.
Chen will receive a 250,000-dollar college scholarship. His teachers who inspired his interest in science were honored with 50,000 dollars, while his school received a state-of-the-art science lab valued at 100,000 dollars.
The competition, designed to inspire creative thinking about science among young people, invites students aged 13-18 to create original videos that illustrated a concept or theory in physics, the life sciences and mathematics.
Since its launch, the Breakthrough Junior Challenge has reached 199 countries and regions. This year's competition attracted more than 11,000 registrants across the globe.