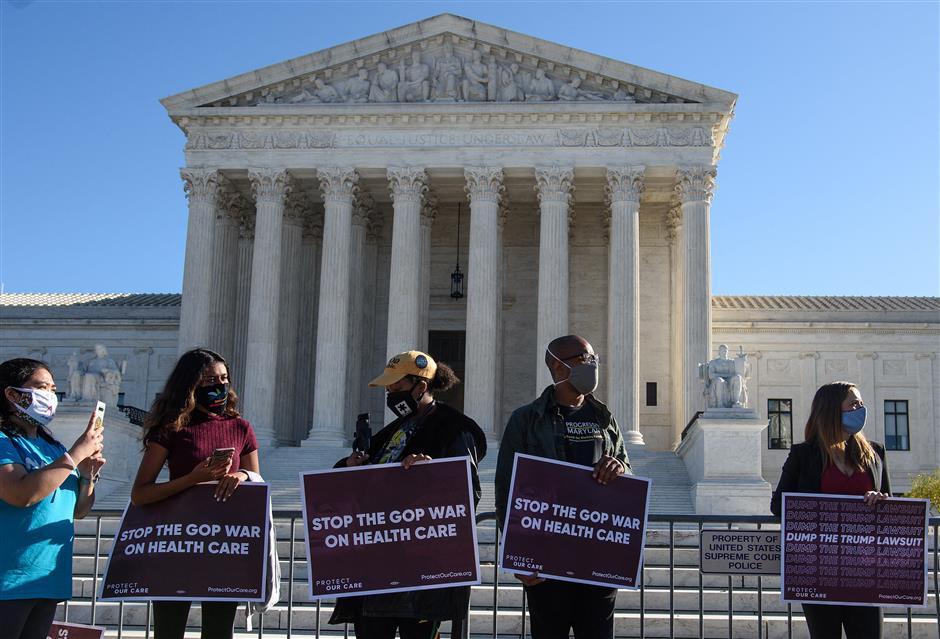 In this file photo taken on November 10, 2020, demonstrators hold signs in front of the US Supreme Court in Washington, DC, as the court opened arguments in the case over the constitutionality of the 2010 Affordable Care Act.(Photo: AFP)

The US Supreme Court on Thursday rejected a bid by Republican-led states to overturn Obamacare, safeguarding the health insurance of millions with the coronavirus pandemic still a threat in much of America.

In a 7-2 decision, the nation's highest court upheld the Affordable Care Act, former President Barack Obama's signature health-care program, ruling that Texas and the other 17 states did not have standing in the case.

President Joe Biden, who was Obama's vice president when the ACA was enacted, called the court ruling "a big win for the American people" and those "who were in immediate danger of losing their health care in the midst of a once-in-a-century pandemic."

"With millions of people relying on the Affordable Care Act for coverage, it remains, as ever, a BFD," Biden said.

"BFD" is a reference to a comment Biden whispered into Obama's ear at the 2010 ACA signing ceremony, when he said: "This is a big fucking deal." The remark was picked up by live microphones.

Obama said the court ruling "reaffirms what we have long known to be true: The Affordable Care Act is here to stay."

"The principle of universal coverage has been established, and 31 million people now have access to care through the law we passed – with millions more who can no longer be denied coverage or charged more because of a preexisting condition," Obama said in a statement.

"Thanks to the tireless advocacy of Americans across the country and the work of Democrats in Congress, the Affordable Care Act endures," said Nancy Pelosi, the Democratic speaker of the House of Representatives.

Republicans have unsuccessfully attempted on numerous previous occasions to have Obamacare thrown out in Congress and in the courts.

Republican lawmakers said the "ruling does not change the fact that Obamacare failed to meet its promises and is hurting hard-working American families."

Former president Donald Trump had pledged to eliminate the ACA but his efforts repeatedly failed and he never presented an alternative.

Four of the conservative justices on the court – including two appointed by Trump and Chief Justice John Roberts – joined their three liberal colleagues in voting to uphold the ACA.

Conservative justices Samuel Alito and Neil Gorsuch, who was also appointed by Trump, were the dissenting voices.

Under the ACA, poor adults have access to the Medicare program normally open only to retired people over 65; young people under 26 can be covered by their parents' insurance; and people whose preexisting medical conditions led to their being denied commercial health insurance have coverage.

Attorneys for the Trump Justice Department and Texas-led states had argued that the entire ACA is unconstitutional because of legal questions over consumer penalties for people who do not obtain insurance.

"Hence, they believe the Act as a whole is invalid," Justice Stephen Breyer said in the opinion of the court.

Breyer noted, however, that Congress had removed the penalties compelling people to buy insurance in 2017 and the plaintiffs could therefore not prove they had suffered any injury which would allow them to bring the suit."