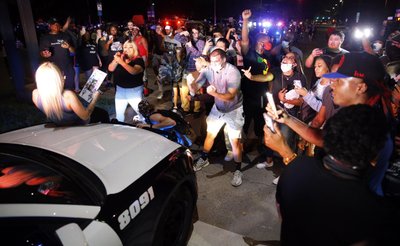 HOUSTON, May 31 (Xinhua) -- USTexas Governor Greg Abbott on Sunday declared state of disaster following violent protests in cities throughout the state over the death of George Floyd.

The move allows Abbott to designate federal law enforcement officers to respond to the ongoing threats, according to a statement released by the governor's office.

In a separate release on Sunday, Abbott said he has ordered thousands more troopers to these cities and more than 1,000 National Guard soldiers to assist the Department of Public Safety (DPS) and local law enforcement in their efforts.

"Texans First Amendment rights are absolute and will always be protected," said Governor Abbott. "But violence, vandalism, and looting will not be tolerated in this state and those found in violation of the law will be arrested and prosecuted."

During the weekend, protest and violence throughout Texas continued as hundreds of protestors were arrested in the past two days.

In Dallas, Police Chief Renee Hall on Sunday instituted curfew from 7 p.m. Sunday night till 6 a.m. for the next several days in response to the weekend violent protest.

In the state capital of Austin, protesters gathered in downtown area Sunday afternoon. According to local media, protesters marched toward the state Capitol and Austin City Hall, chanting, "No justice, no peace."

Demonstrations and riots have spread to cities across the United States after a video went viral of African American George Floyd being kneeled on by a white police officer before he died in the mid-western US state of Minnesota on Monday.