HOUSTON, Feb. 21 (Xinhua) -- Authorities in U.S. state of Texas on Sunday signed orders to temporarily stop power companies from sending bills to customers, after the severe weather and massive blackouts. 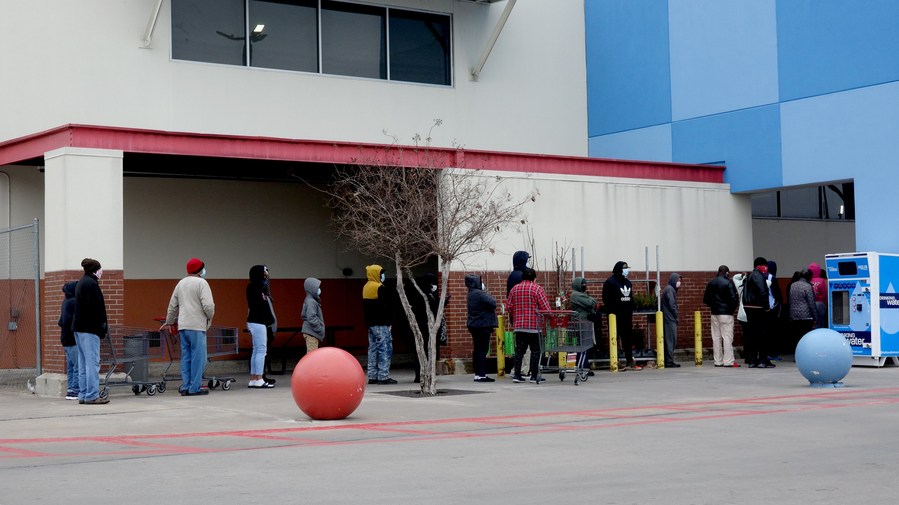 People wait in line to shop at a local supermarket in Houston, Texas, the United States, on Feb. 18, 2021. (Photo by Chengyue Lao/Xinhua)

During a press briefing on Sunday, Texas Governor Greg Abbott said the recent spike in energy bills was "the top priority for the Texas Legislature right now," adding that he and other state leaders are working fast to find solutions to the issue.

According to media reports, Texas Public Utility Commission on Sunday met to sign two orders, one of which was to stop companies from sending invoices or bill estimates to customers "until we work through issues of how we are going to financially manage the situation we are in," commission Chair DeAnn Walker said.

The other one would order energy providers to temporarily stop disconnecting customers from power or water because they haven't paid.

"Disconnect for non pays cannot occur on a Sunday and that's why we're acting today at this hour ... trying to stop any from occurring tomorrow," Walker was quoted by local media as saying.

As families try their best to find reliable water and food, some are worried about their abnormally high electricity rates.

The power cost for some went up unbelievably for the time when the power was on and even some for when it was off during the extreme winter weather.

Customers of the electric company Griddy, which gives real-time access to the power grid wholesale, found their bills unbelievably high.

A customer from northern Texas told Fox News that he got an electric bill of 17,000 U.S. dollars over five days of use, even though his family did what they could to conserve. In Houston, a Griddy customer told KTRK TV station that her bill this week totaled 5,500 dollars.

Griddy has urged their customers to switch companies before the winter storm because of a high price forecast, but customers found they were unable to change, either because they couldn't find a provider that took new customers, or the switch time would take at least a week.

In a statement to local media KTRK on Friday afternoon, Griddy said it is asking the Electric Reliability Council of Texas (ERCOT) and the Public Utility Commission, which oversees ERCOT, for relief for its customers.