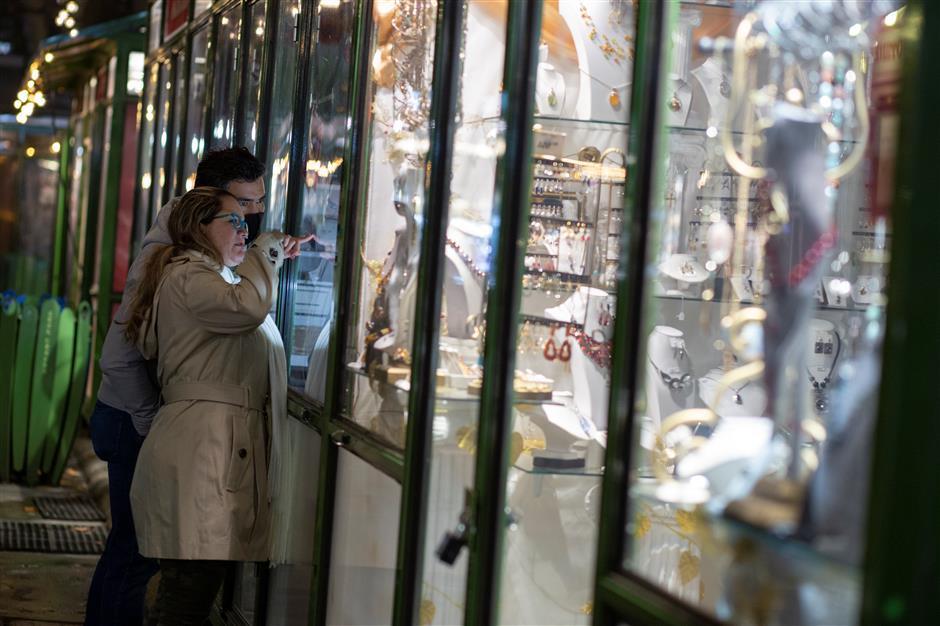 Costumers look through the window of a seasonal store in Bryant Park in New York on Thanksgiving ahead of Black Friday on November 26, 2020. (Photo: Agencies)

US consumers' online spending made a new record high of US$5.1 billion on Thanksgiving Day with a year-on-year growth of 21.5 percent, according to the data issued by Adobe Analytics.

However, the record-making sales failed to meet Adobe Analytics' forecast of US$6 billion as some retailers rolled out promotions in mid-October and the raging pandemic has left people's savings rate at a higher level.

Heavy discounts and aggressive promotions since early November succeeded at having consumers loosen their string of wallets earlier, according to Taylor Schreiner, director with Adobe Digital Insights.

Statistics with Adobe Analytics showed that nearly 50 percent of online spending was on purchase of smartphones, and retailers with curbside pickup service had a much higher conversion rate of traffic to their websites.

Online sales on Black Friday and Cyber Monday would reach US$10.3 billion and US$12.7 billion, respectively, according to the forecast by Adobe Analytics.

"This year's Black Friday won't have as much 'door-busting' as per usual. Retailers are pushing deals up and promising Black Friday deals to last for 'all of November and December'," said Adobe Analytics.

US consumers' online spending on Black Friday could exceed that on following Cyber Monday as store capacity limits amid COVID-19 will turn many consumers away at the door and pull them online, according to Adobe Analytics.

Foot traffic at Macy's flagship store, Saks Fifth Avenue and other retailers' stores in New York is apparently lower than that in the same time of 2019 with very few lines spotted on Friday morning.

Foot traffic in retail stores will drop 22 percent to 25 percent year on year during the six-week-long holiday shopping season in 2020, according to an earlier forecast by retail analytics provider ShopperTrak.

Meanwhile, the NFR said US online sales and other non-store sales would increase 20 percent to 30 percent year on year in the range of US$202.5 billion to US$218.4 billion in November and December, which is higher than US$189.1 billion projected by Adobe Analytics.

The shift to digital will be permanent and mall-traffic and department-store visits will be challenged going forward, said Robert Samuels, consumer analyst with UBS Global Wealth Management.

The share of US e-commerce industry in total retail sales will likely rise further from current range of 10 percent to 15 percent as consumers may be reluctant to return to the store, said Samuels in a recent note.