WORLD US, the West fail miserably in response to COVID-19

US, the West fail miserably in response to COVID-19 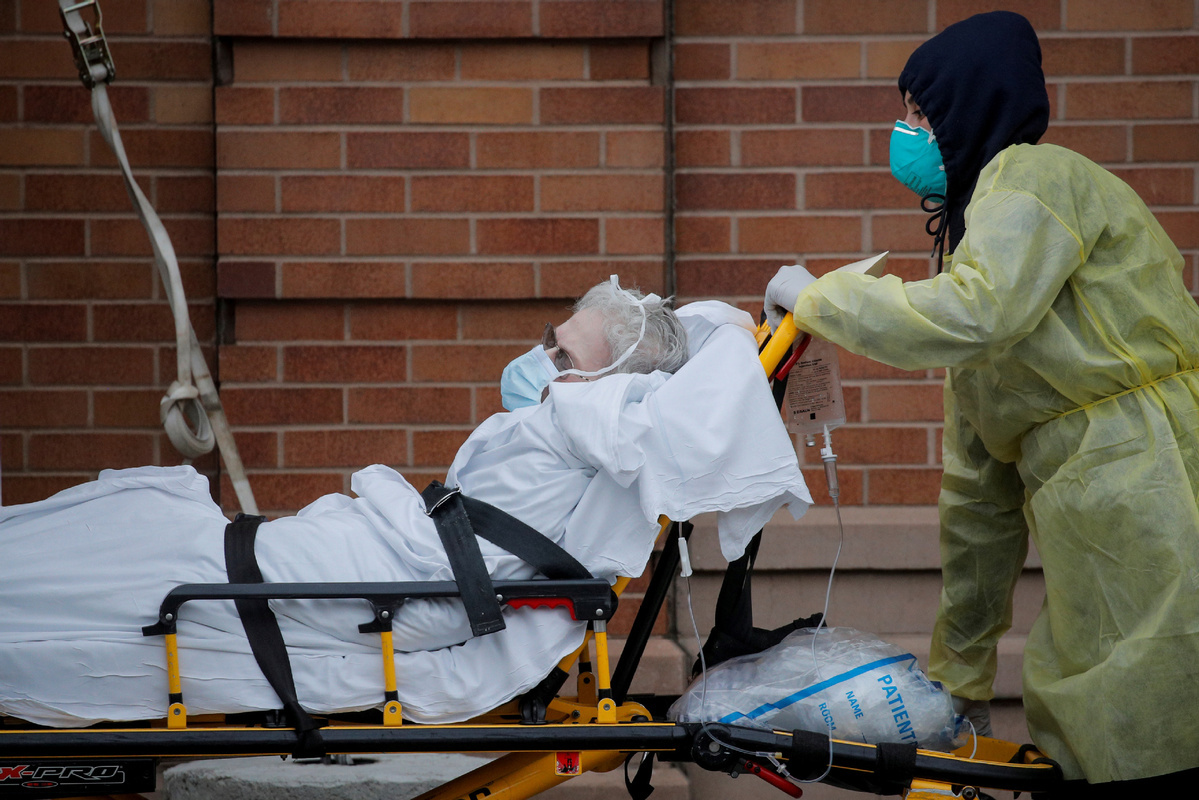 Paramedics take a patient into the emergency center at Maimonides Medical Center during the outbreak of the coronavirus disease (COVID-19), in the Brooklyn borough of New York, US, April 14, 2020. (Photo: Agencies)

For more than a year, the United States' battle against the COVID-19 pandemic has turned out to be a miserable failure both at national and international levels, said a report released on Monday, saying the country is facing the fourth wave of coronavirus with a new high in confirmed cases.

The report, "The Truth about America's Fight against COVID-19" said the US, as the world's biggest economy, has not only disrupted global efforts in combating coronavirus but also thrown US citizens into a "crisis".

While the world has raced to strengthen international cooperation on vaccines and promoted the fair and equitable distribution of vaccines, the US has engaged in "vaccine nationalism" and made it more difficult for developing countries to obtain vaccines, the report said, adding the US has exported less than 1 percent of its vaccine production.

Months of COVID-19 vaccine hoarding in the US has also resulted in the waste of large quantities of vaccines due to reduced domestic demand. Doses to vaccinate at least 13 million people are in danger of expiring in the US, The Washington Post reported on July 27.

The US government also disrupted international anti-pandemic efforts by politicizing origins tracing, "coercing the World Health Organization and some scientists to give up their objective and impartial positions", said the report, jointly released in Beijing by three think tanks, including the Chongyang Institute for Financial Studies at Renmin University of China, Taihe Institute and Intellisia Institute.

Washington has targeted China on the issue of virus origins tracing. US President Joe Biden recently ordered an official investigation into the origins of possible links between the novel coronavirus and a laboratory in Wuhan.

Martin Jacques, a former senior fellow at Cambridge University, said at a seminar where the report was released that the "attack on China" is a strategy of distraction and deflection to try and tarnish China's reputation and name in the world as much as possible, and distract from the poor performance".

"COVID-19 is mired in a sort of "Cold War" rhetoric, "Cold War" language, and "Cold War" assault by the US and this is going to continue," Martin said via a video link.

In fact, the US government has failed to take any effective exit control measures, which the report said has "indirectly exacerbated the global spread of the pandemic".

When the US faced the hardest hit of the pandemic, the number of US citizens traveling abroad also reached its peak.

From November 2020 to January 2021, with the average daily confirmed cases exceeding 186,000, the average daily number of US citizens traveling abroad reached the peak of 87,000, disrupting the global response to the COVID-19, the report said.

The US government was also "exporting the virus" by returning thousands of illegal immigrants to developing countries that were not equipped to deal with it, intensifying COVID-19 deterioration in those countries.

Tang Bei, an international relations researcher at Shanghai International Studies University, said the US is prone to attribute heath threats to foreign countries, especially developing countries, hence ignoring the problems inside the country.

With the US recording its highest daily case loads in six months, its poor performance in curbing COVID-19 has also thrown its people into a crisis.

According to Johns Hopkins University, the US has the most COVID-19 infections of any country, with more than 35.7 million confirmed cases and more than 616,000 deaths by Monday.

Growing partisan divide is seen as a main reason behind the US' poor COVID-19 response at home, the report said, adding that it constitutes a n image of a "disunited America" in the fight against the pandemic.

"The anti-pandemic policy became a bargaining chip in the political game between the parties. In this way, the warring parties have become the biggest obstacle in the prevention and control of the pandemic, ignoring the overall interests and health of the US citizens," the report said.

"COVID-19 was probably the greatest test of governance the world has seen since the Second World War. The United States and the West failed miserably. China, on the contrary, has been extraordinarily successful," Martin said.