US tightens rules as cases soar 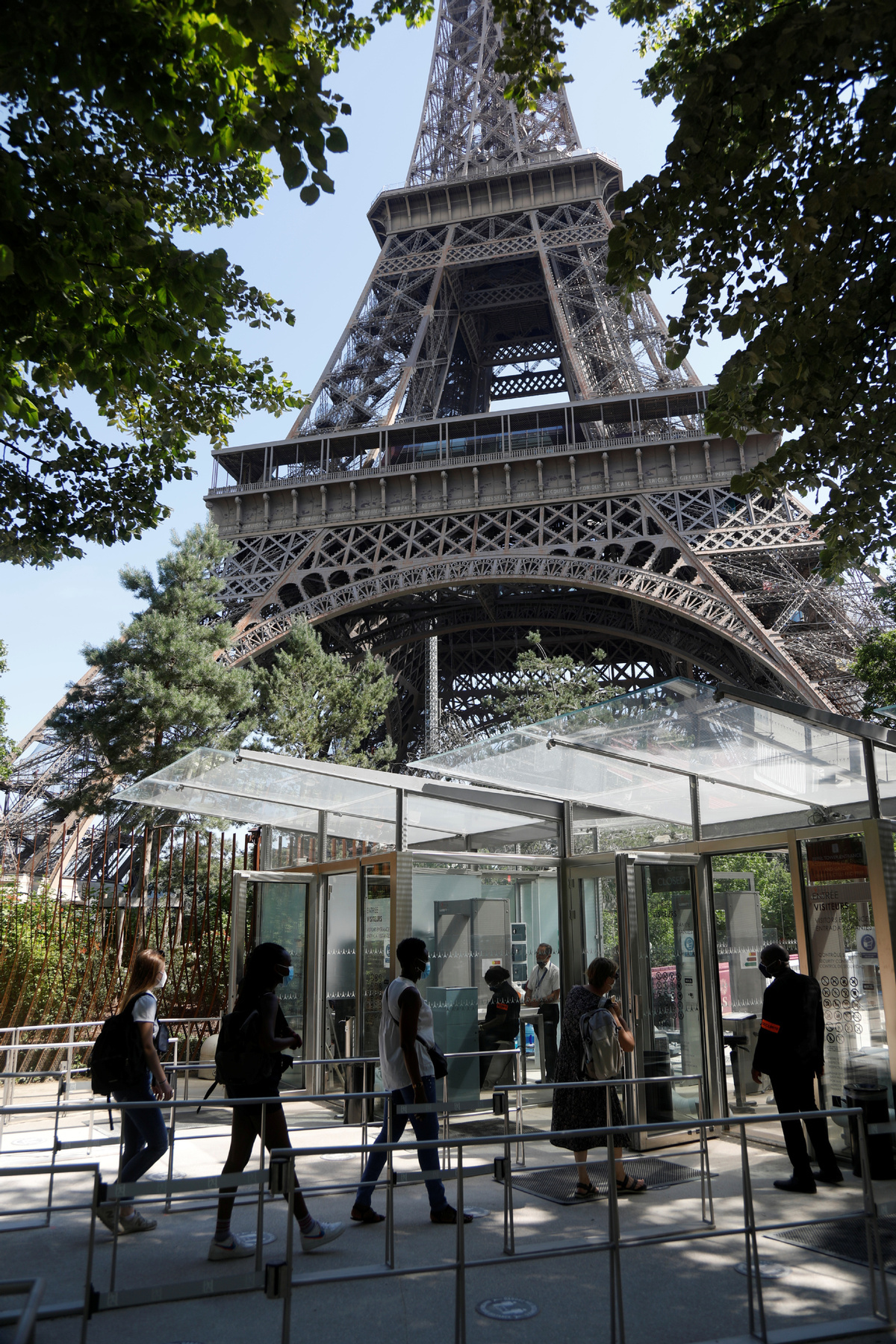 Visitors arrive to visit the Eiffel Tower in Paris on its reopening day to the public in France, on June 25, 2020. [Photo/Agencies]

In France, the Eiffel Tower on Thursday welcomed back visitors after the outbreak forced the Paris landmark into its longest period out of action since World War II.

Strict hygiene and safety measures have been put in place for the reopening.

Visitors can access the 324-meterhigh tower via staircases only until early July, with elevators off-limits for the time being because of safety considerations.

In addition, visitors are not allowed to go any higher than the second floor of the tower, and anyone over the age of 11 is required to wear a face covering.

The tower lost $30 million from the lockdown that started in March, according to its director general, Patrick Branco Ruivo.

In Germany, authorities in the most populous state faced criticism on Wednesday over their handling of a major outbreak at a slaughterhouse that triggered a regional lockdown and saw residents barred from visiting other parts of the country.

North Rhine-Westphalia's state government on Tuesday announced it was reimposing many lockdown measures in Guetersloh, home to the Toennies slaughterhouse in Rheda-Wiedenbrueck, and neighboring Warendorf, where many of its workers live. Between them, the two counties have 670,000 inhabitants.

Almost 1,300 infections have been linked to the Toennies slaughterhouse. State governor Armin Laschet said Tuesday that restrictions were being imposed for a week to "calm the situation," expand testing and establish whether the virus has spread beyond employees.

The total number of coronavirus cases in the country climbed to 191,657, with 1,492 daily infections.

Turkey and China have supported each other in the fight against COVID-19. Chinese doctors and medical experts held a video conference with Turkish counterparts to share China's experience in treating coronavirus patients, protecting medical workers, and controlling the spread of the virus.

Agencies, Xinhua and Ai Heping in New York contributed to this story. 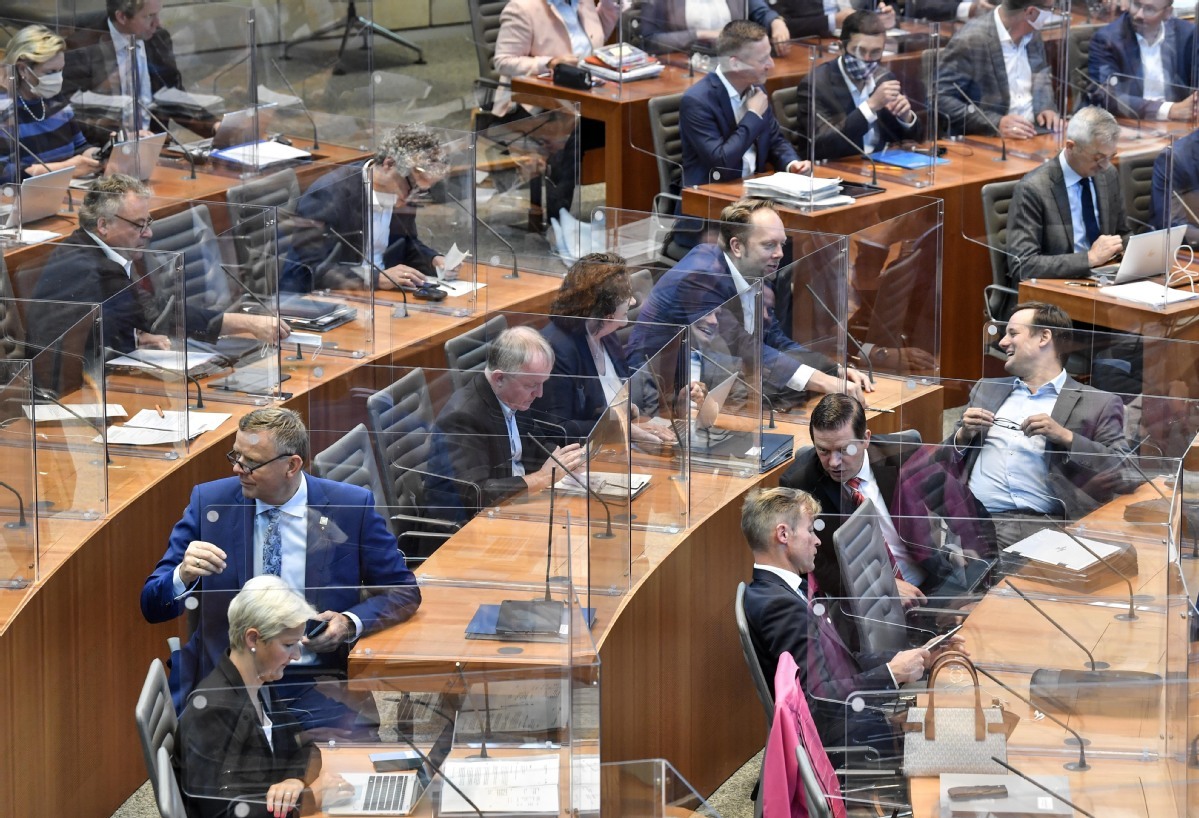 Lawmakers, separated by transparent shields due to the coronavirus, attend a session of the state parliament of the German state of North Rhine-Westphalia in Dusseldorf on June 24, 2020. [Photo/Agencies]

US officials on Wednesday announced tough measures including quarantines and stay-at-home orders as daily coronavirus cases approached record levels after surging across the nation's South and West.

More than 35,900 cases were recorded in the past 24 hours, according to a tally by Johns Hopkins University, with heavily populated states including Florida, Texas and California all reporting a record number of cases.

The world's largest economy is already the country hardest hit by the pandemic, with a mounting death toll of almost 122,000.

Three northeastern states that made progress in beating back the pandemic－New York, New Jersey and Connecticut－urged visitors arriving from US hot spots to quarantine themselves.

Several states in the South and West including Florida and Texas are suffering what White House adviser and top scientist Anthony Fauci described as "disturbing" new surges in infections.

Fauci warned the next two weeks would be "critical" to addressing the surges.

Meanwhile in India, authorities are launching a massive survey taking down health details from New Delhi's entire population of 29 million, and testing everyone with symptoms by July 6.

The new plan was announced on Wednesday after the sprawling capital became the worst-hit city by the pandemic in India with 70,390 cases, exceeding Mumbai.

Nearly half of the cases in Delhi were part of viral clusters, and the search for them through "vigorous contact tracing of COVID-19 positive patients will be undertaken to analyze the reasons for clustering", the city government said.