WORLD US to ease lockdown after virus passes 'peak'

US to ease lockdown after virus passes 'peak' 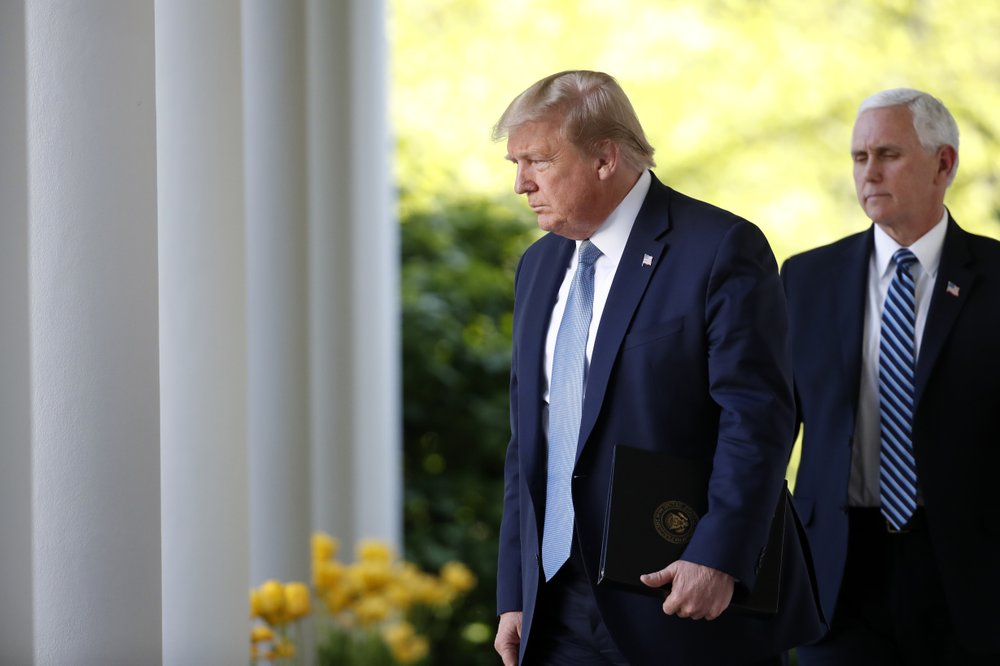 President Donald Trump, followed by Vice President Mike Pence, arrives to speak about the coronavirus in the Rose Garden of the White House, Wednesday, April 15, 2020, in Washington. (Photo: AP)

US President Donald Trump said he will announce Thursday the first plans for lifting coronavirus lockdowns across the United States after the country passed the pandemic's "peak," mirroring a gradual easing in Europe.

His comments came shortly before the number of US fatalities -- already the world's highest -- reached a new daily record and became the heaviest one-day death toll of any nation.

"It is clear that our aggressive strategy is working," he told a news conference late Wednesday in Washington. "The battle continues but the data suggests that nationwide we have passed the peak on new cases."

Trump said he would be announcing guidelines for a reduction in the lockdown in some states, possibly taking effect before the end of this month.

Earlier, Germany also unveiled its plans for cautious reopening, becoming the first major European nation to take on the delicate task of restarting its economy without triggering a new wave of infections before a vaccine can be developed.

Facing a difficult reelection in November, Trump predicted that the US economy, the world's largest, would "come back quickly" from the paralysis induced by measures taken to slow the virus.

Around the world, the total number of COVID-19 cases soared past two million, according to an AFP tally, and the death toll topped 134,000, according to Johns Hopkins University.

In Riyadh, G20 nations of the world's major economies announced a one-year debt moratorium for the world's poorest nations, as the global economy enters the worst recession in a century.

Fallout, meanwhile, continued over Trump's attack on the World Health Organization and suspension of US funding to the UN agency.

Despite criticism, Trump repeated his accusations Wednesday, saying the WHO covered up the extent of the virus when it first appeared in China, and that as a result France, Italy and Spain were caught unawares.

"Tragically, other nations put their trust in the WHO," he said.

UN chief Antonio Guterres said this is "not the time" to cut WHO funding, while billionaire Bill Gates, a major WHO contributor, called the move "dangerous."

European allies were similarly disapproving and Washington's rivals also took aim -- Russia condemning the "selfish approach" of the US.

Edging back toward normal

In Europe, Denmark began reopening schools for younger children after a month-long closure and Finland lifted a two-week rail and road blockade on the Helsinki region.

Lithuania said it would allow smaller shops to reopen from Thursday.

Other countries are tweaking confinement rules, with Iran set to let some small businesses reopen and India allowing millions of rural people to return to work.

In South Korea, people went to the polls on Wednesday and delivered a strong show of support for President Moon Jae-in, commending his handling of the epidemic.

Once home to the world's second-largest outbreak, South Korea has largely brought the virus under control through widespread testing, contact-tracing and social distancing.

A full-scale return to normality still appears a long way off in most other countries.

Harvard scientists have warned that repeated periods of social distancing could be needed as far ahead as 2022 to avoid overwhelming hospitals.

Spanish Prime Minister Pedro Sanchez, who has allowed work to restart in some factories and building sites, warned that "nothing will be the same until a vaccine is found."

Belgium extended its stay-at-home order until at least May 3 and banned mass gatherings until the end of August.

In Germany, Chancellor Angela Merkel announced first steps in undoing coronavirus restrictions that have plunged the economy into a recession.

Most shops will be allowed to open once they have "plans to maintain hygiene" although schools must stay closed until May 4 and a ban on large public events will remain in place until August 31.

"We have to proceed with extreme caution," Merkel told reporters in Berlin.

Schools will gradually be reopened with priority given to pupils about to take leaving examinations.

The government urged people to wear face masks when out shopping or on public transport, but stopped short of making it a requirement like in neighboring Austria.

Trouble yet to come

On the horizon looms the worst economic downturn in a century, which the IMF has said could see $9 trillion wiped from the global economy.

Germany is already in recession and US manufacturing production plummeted 6.3 percent last month, its biggest fall in seven decades.

In France, more than a third of workers are on temporary unemployment, the government said.

In poorer, more densely populated countries, governments are still struggling to enforce restrictions on movement that are piling misery on the needy.

Fears over hunger and possible social unrest are especially acute in parts of Africa and Latin America.

In Ecuador hunger trumps fear of the virus for residents in rundown areas of the badly affected city of Guayaquil.

"The police come with a whip to send people running, but how do you say to a poor person 'Stay home' if you don't have enough to eat?" said Carlos Valencia, a 35-year-old teacher.