WORLD US to establish Space Force by 2020: Pence

US to establish Space Force by 2020: Pence 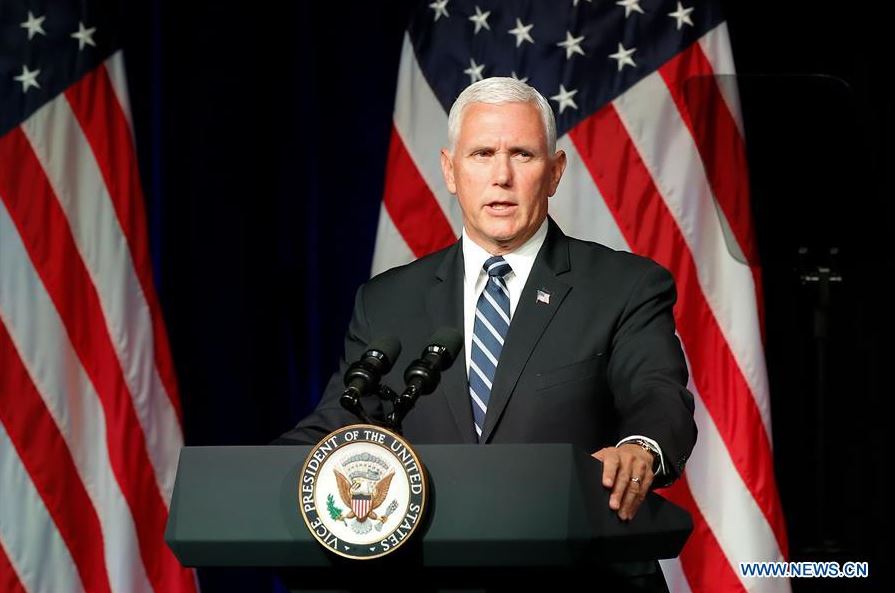 US Vice President Mike Pence speaks during an announcement of the Trump Administration's plan to establish the US Space Force by year 2020 at the Pentagon, Virginia, the United States on Aug. 9, 2018. (Photo: Xinhua/Ting Shen)

WASHINGTON, Aug. 9 (Xinhua) -- US Vice President Mike Pence said Thursday that the United States plans to establish a Space Force by 2020, an idea floated by President Donald Trump and questioned by many top officers at the Pentagon.

"The time has come to establish the United States space force," Pence told a gathering at the Pentagon, citing Trump's directive earlier this year to form the sixth branch of the US armed forces.

"It is not enough to merely have an American presence in space. We must have American dominance in space and so we will," Pence said in his speech.

In concurrence with Pence's speech, the Pentagon laid out its plans to form the new branch of the US military in a 15-page report, identifying immediate steps of action. This includes establishing a Space Development Agency, which is "a joint organization charged with rapidly developing and fielding next-generation capabilities."

The report also called for the creation of a Space Operations Force, which it said will be comprised of career space experts who are "trained, promoted and retained as space war fighting professionals."

Also part of the plan is a United Combatant Command-level Space Command, which will have the task to "improve and evolve space war fighting."

Although not clearly outlined in the report, Pence announced that the Pentagon will create a new Assistant Secretary of Defense of Space, the top civilian position to oversee the creation of the new branch who will report to the Pentagon chief.

Pence said funding for the new military branch will be requested in the fiscal year 2020 defense budget. He called on Congress to approve an "additional eight billion dollars in space security systems."

With foreseeable opposition from Congress and top officers in the Pentagon, Pence said that "creating a new branch of the military is not a simple process."

Jim Inhofe, a Republican Senator and the number two at the Senate Committee on Armed Services, has openly rebuked the suggestion of creating a new branch of the military. "I know the president has strong feelings. I think we can do that without a new branch," he told media early this month.

Trump said in June that he was moving to establish a space force as the sixth branch of the US armed forces.